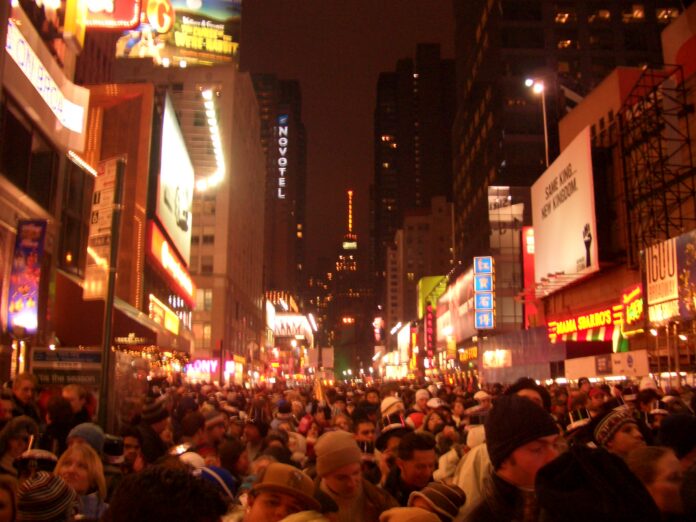 On December 31, 2000, I was in New York City. I went there because I wanted to attend the New Year’s Eve festivities at Times Square; having watched the spectacle on TV for years, I felt it was time I experienced it for myself. Time and time again, people warned me not to go. “I’ve been there; it’s horrible,” someone would say. “You can’t see anything, you can’t hear anything, the crowds are crazy. You’d have a much better time if you just stayed home.” And each time I replied, “I believe you. I want to go anyway.”

I hate crowds, yet there were bound to be close to a million people there. I hate the cold, and it was well below freezing—a major snowstorm had just blown through. I hate noise and chaos; the scene was likely to include both. In spite of all these things, I went, even knowing for certain in advance that it would be unpleasant, and knowing I could choose not to go.

Sure enough, the experience lived up (or down) to my expectations. In addition to the hundreds of thousands of noisy people crowding on all sides and extremities numb from the cold, my bladder was painfully full as I stood there for more than six hours in what can only be described as complete discomfort. I couldn’t see or hear what was happening on the stage several blocks ahead, and when the ball dropped and the police barricades were moved aside, I could not have been less interested in staying to celebrate. Warmth, food, and a lavatory—not necessarily in that order—were foremost on my mind. Later, when the people who had warned me off in the first place asked if I’d do it again, I said, “I’ve done it once; I don’t need to do it a second time. But if I could go back in time and choose again whether or not to do it the first time, I’d choose the same experience.” Why? Because no description of an experience can ever really tell you what it’s like. If you want to know, you have to find out for yourself.

The kind of knowing you get from experience is qualitatively different from what you get by reading about something or hearing a story. This is why people travel instead of just reading travel books. However much you may trust other sources of information, they can’t provide what your own senses can. And just as some foods are worth eating even though they don’t taste good, some potentially unpleasant experiences are worth having.

From Descartes, who said, “I think, therefore I am,” through phenomenologists like Husserl and Heidegger, who tried to create a rigorous science of experience, philosophers have time and again reaffirmed the importance of one’s own experience in understanding the world. Yet it is a tacit principle of modern western culture that only pleasant experiences are worth pursuing, that any experience you can’t reasonably expect to enjoy should be avoided if possible. This attitude effectively puts the evaluation of experiences in other people’s hands, but other people will never experience things exactly the way you will. You may enjoy an experience someone else does not, and even if you don’t, you may appreciate the value of collecting that knowledge for yourself.

For years I listened to people’s stories about their vacations to Hawaii, though I’d never visited there myself. Some of them told me it’s a wonderful place, full of beauty and culture; others told me it’s overcommercialized, touristy, and generally a waste of time. And the fact is, they’re all right—each from a different point of view. No two people can have exactly the same experience of the same thing, place, or event. There are too many variables, not the least of which is the attitude with which you approach an experience. Your background, tastes, expectations, and many other factors will influence your interpretation of any experience. I eventually visited Hawaii myself, satisfied my curiosity, and formed my own opinions. I thought it was lovely, by the way (which is not to say that it wasn’t also touristy, expensive, and so on). But that’s what it was like for one person, with one background, at one time. As the saying goes, your mileage may vary.

While any experience, good or bad, can trivially be called a “learning experience,” I don’t necessarily have learning in mind when I think of experiencing things I may not like. I think, more generally, about approaching new experiences with equanimity (to the extent possible), trying to detach myself from an immediate value judgment. When I practice t’ai chi and my legs hurt, I try to think: “It’s just a sensation. Not everything that’s painful is necessarily bad.” And even things that are bad usually have some positive value. I had malaria once and it was terrible; I wouldn’t wish it on anyone. I can’t pretend I liked it, but I do have a story now that I wouldn’t have had otherwise, and I have a piece of knowledge that most Americans don’t have: I know what malaria actually feels like, while others just know the clinical list of symptoms.

There are some experiences I choose not to have—for legal, moral, or philosophical reasons. I avoid experiences I consider likely to cause harm to myself or anyone else; I also avoid some experiences about which I simply have no curiosity at all—not everything can be interesting to everyone. Nor do I value every experience equally—for example, I certainly cannot say I have no regrets. I can, however, say that even my stupidest and most selfish choices have, at least indirectly, resulted in some eventual good.

The Decade of Risk

When I turned 30, I gave a little speech at my birthday party. Among other things, I declared that the following 10 years would be my “decade of risk.” I didn’t mean that I planned to take up sword swallowing or start investing in pyramid schemes. Rather, I meant that I would try to be more open to experiences that didn’t fit into my world view, that could change me in unexpected ways, that lacked assurances of enjoyment but offered the potential for enlightenment, in some small way. In short, I would seek to have more experiences for their own sake. In retrospect, I fared reasonably well, just as I did in my forties—my “decade of wealth and influence.” (Now in my fifties, I’m inclined to make things easier on myself. Can this be my “decade of consistent frozen yogurt consumption”?)

There are plenty more interesting things to experience and report. In the meantime, get out there and experience things. Try it, you’ll like it—or maybe not—but you’ll know something you didn’t know before.

Note: This is an updated version of an article that originally appeared on Interesting Thing of the Day on May 30, 2003, and again in a slightly revised form on July 10, 2004.