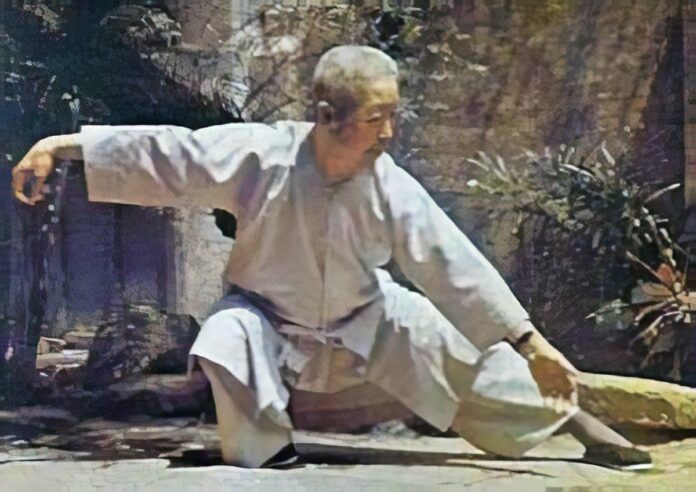 There’s nothing like a good action film, especially if it involves martial arts. Explosions and chases are all well and good, but I like kung fu better. I’ll eagerly watch Jackie Chan, Chow Yun Fat, or Keanu Reeves give the bad guys a whomping using no weapons other than physical skill and a sharp mind. In the real world, though, I find the best kung fu not in the flashy, Hollywood-friendly jumps and kicks, but in a discipline your grandmother may well practice: the slow, gentle movements of a martial art called t’ai chi ch’uan.

For a westerner, the first challenge in learning about a Chinese martial art is figuring out how to pronounce it. There are several systems for representing Chinese sounds using the Roman alphabet. These varying transliterations have led to numerous spellings (“tai chi chuan,” “t’ai chi ch’uan,” “taijiquan,” etc.) and pronunciations. I’ll leave the details for another article, but if you want to avoid ambiguity it’s best to use the pronunciation “tai ji,” because the chi in “t’ai chi” is not at all the same thing as ch’i (or qi), a Chinese word usually translated as “internal energy.”

T’ai chi is based on the principles of Taoism, and its invention dates back about a thousand years. According to legend, a Taoist monk named Chang San Feng was watching a crane trying to catch a snake. Every time the bird struck with its beak, the snake would gently slide out of the way, and this defense was so successful that the crane eventually gave up. Chang remembered Lao Tzu’s words in the Tao Te Ching: “The soft overcomes the hard.” This image led him to develop a fighting art based on softness, yielding, and flexibility, rather than brute force.

The name “t’ai chi ch’uan” literally means “supreme ultimate fist,” a reference to the fact that it was considered the most advanced, and deadliest, form of boxing. For centuries, t’ai chi was a closely guarded secret, taught only to the members and close associates of a few powerful families. A variety of distinctive styles emerged, taking on the names of the families from which they originated. The earliest form was Chen style, which later evolved into Yang, Wu, and Sun styles, among others. Each style has distinctive movements and emphases—some are more athletic and explosive, others more gentle and flowing; some emphasize martial applications, while others focus on health, softness, and the internal movement of energy. (The type of t’ai chi I practice is in the Yang style, which is gentler and more subtle than the original Chen style.)

The differences, however, are less important than the similarities. All forms of t’ai chi follow several basic principles, including relaxation, rootedness, separation of weight, and smooth, continuous movement from the body’s center or tan t’ien. A t’ai chi student spends months or years learning the solo form, a series of interconnected postures designed to teach these basic principles, improve balance, and strengthen the leg muscles. (Depending on the style, the number of movements ranges from fewer than ten to more than a hundred.) Although most schools of t’ai chi don’t include sparring in the manner of karate or judo, it is crucial for students to understand the martial applications of each of the form’s postures. A two-person exercise called push hands—to many, the most compelling aspect of the art—helps to serve this purpose. In push hands, partners help each other identify areas of tension by trying to push the other person off balance while maintaining their own. T’ai chi training often also includes ch’i kung (or qigong), exercises that develop healthy breathing skills and attention to the flow of one’s energy.

T’ai chi is often referred to as one of the “internal” martial arts, or neijia. In contrast with the so-called external martial arts—karate, jiu-jitsu, taekwondo, and so on—internal or “soft” martial arts focus on the movement of energy within the body. Internal martial arts do not rely on muscular strength, so hard kicks, punches, and blocks are not commonly employed. Instead, a minimum of external energy is used, and skilled practitioners blend with, rather than block or deflect, their opponents’ energy. Other internal martial arts include pa kua, hsing-i, and aikido.

Each school and teacher takes a slightly different approach to t’ai chi. There are no ranks or belts as there are in many martial arts, as it is considered more important for an individual to assess internal growth than to take an objective measure of skill or fighting ability. Besides, t’ai chi is a very subtle art that takes most people quite a long time to master. (As one my former teachers is fond of saying, progress in t’ai chi is measured in decades.) Nevertheless, t’ai chi tournaments and competitions are quite popular in some places. Judges grade an individual’s execution of the solo form, based on adherence to the basic principles. Push hands is also done competitively, with points given for causing one’s opponent to lose balance—or, in some cases, for neutralizing a particularly intense push. T’ai chi tournaments tend to have a greater spirit of camaraderie and respect than most competitive sporting events.

People take up the practice of t’ai chi for a variety of reasons. For many, health and fitness are the primary motivations. And without doubt, t’ai chi is an excellent way to reduce blood pressure, improve circulation, strengthen muscles and bones, and develop balance. Because the movements are slow and gentle, people of any age or level of fitness can participate and benefit. Other people study t’ai chi for its martial applications, and still others like to think of it as yoga in motion—a sort of moving meditation.

When I first started studying t’ai chi in the mid-1990s, I didn’t know anything about its history or applications, and certainly wasn’t interested in learning how to fight. My initial motivation was much more mundane: I simply wanted to learn how to move my body gracefully. I had never learned to dance or been involved in sports of any kind, and I felt clumsy and out of touch with my own body. T’ai chi certainly gave me what I was looking for. I began to develop much better balance, posture, and flexibility. And as I learned more about what it feels like to move in a deliberate and graceful way, dancing and other types of movement began to feel much more natural too.

The surprising thing, though, was that the most important lessons I learned from t’ai chi had nothing to do with physical movement at all. For one thing, I learned to relax much more easily than I could before, and by relaxing I developed a greater sense of equanimity and flexibility in dealing with other people. I found myself unconsciously applying the principles of softness and yielding to my conversations, and this frequently improved the outcome of arguments and other tense situations. Don’t get me wrong: studying t’ai chi hasn’t turned me into some sort of enlightened master exuding radiant bliss. It’s just that, on the whole, I’m calmer and more agreeable than I used to be, and, I can hope, moving further in that direction.

Don’t Try This at Home

If you’re interested in learning t’ai chi, let me offer just one word of unsolicited advice: find a good teacher. (If you’re in the San Diego area, drop me a line—I know a guy.) Don’t attempt to learn t’ai chi by reading a book or watching a video. There are many fine books and videos, of course, and these can supplement or enhance your training. But they can never correct you when your posture is incorrect—which, I can almost guarantee, will be most of the time for the first many months. (Even though I’ve been doing t’ai chi for decades, my teacher still regularly points out errors in my form, and no sooner do I correct those than he notices something else that needs adjustment.)

In some ways, practicing t’ai chi has fed my appetite for contradiction. It’s an exercise I enjoy even though I hate exercise, and it’s a martial art I believe in despite my pacifist leanings. And yet, somehow, it all makes sense. T’ai chi is, after all about balance—yin and yang, inner and outer, negative and positive. Cultivating these contrasts gives me a deeper appreciation of what lies at the center.

Note: This is an updated version of an article that originally appeared on Interesting Thing of the Day on April 21, 2003, and again in a slightly revised form on August 10, 2004.