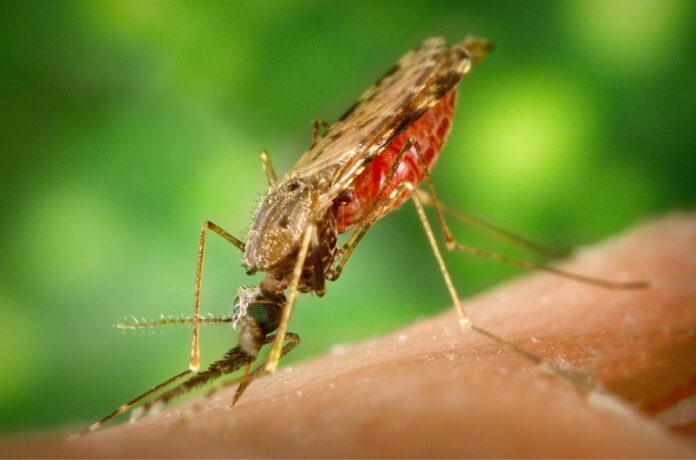 Malaria, as most people know, is a nasty disease caused by a parasite that’s transmitted by mosquitoes. The disease is sometimes deadly, and always extremely unpleasant. The word “malaria” comes from the Italian mala aria, “bad air.” When the term was coined, it was commonly believed that malaria was caused by breathing in bad air—namely, the foul vapors emanating from swamps, latrines, and so on. It was a mere coincidence that the stagnant water that provided a breeding ground for mosquitoes also frequently contributed to bad air.

The fact that the word “malaria” is a misnomer is perhaps mildly interesting, but what you may find more interesting is my personal story. Malaria and I go way back.

How I Spent My Summer Vacation

When I was 19, I spent the summer in a remote area of Indonesia. One morning I started feeling a bit ill, and by mid-afternoon I had a high fever, uncontrollable chills, severe aches in delicate body parts, and a general feeling of complete yuckiness. My companions debated whether or not it could be malaria. The symptoms were correct, but I had been taking an antimalarial drug faithfully and there was some question whether I’d been there long enough for the parasite to incubate. After a day or so I went to a local clinic, had a blood test, and was told for certain that it was indeed malaria. I had expected to run into scary foods, treacherous hiking trails, and maybe even a cannibal or two, but I had never seriously entertained the thought that I might contract a serious disease on my trip. How interesting.

On the advice of an American doctor with whom we were in contact by shortwave radio, I began taking a different medicine, plus more of what I had already been taking. The doctor asked that I provide him with periodic blood samples so he could tell when the malaria had been sufficiently knocked out. This would involve putting a drop of blood on a slide, sending it out with the mail by a tiny airplane to the medical center, and then waiting for results back by radio. After a few days I regained enough strength that I could continue my travels, and I flew to a small village where I was to live for a week with a missionary family—John, Wendy, and their three young children.

When it came time to send in my next blood sample, I was far too squeamish to prick my own finger, so Wendy reluctantly offered to do the honors. She swabbed off my finger, unwrapped a sterile lancet, and stabbed lightly. Yowch! She had applied enough pressure to cause plenty of pain, but not enough to break the skin. She tried again…and again…and again. Four tries, and the best she could do was to lacerate the epidermis. It is hard to say which one of us was having more trouble with the procedure, but success was not at hand. So Wendy called her husband in to help. John was amused at the situation, and assured us both that he could handle the job. I offered my other hand, John stabbed, and…more pain, but no blood. He tried a second time, then a third, and a fourth. Finally, with considerable squeezing, we were able to get one tiny drop of blood out on the last try. It’s a good thing, too, because I was beginning to feel that the malaria wouldn’t have been as bad as the blood test. We sent off the blood sample, hoping for results soon.

That evening at dinner, there was a bowl of cooked carrots on the table. I didn’t take any. Wendy said, “Aren’t you going to have any carrots?” I replied, “I really don’t care for them, thanks.” She said, “Well, I’m going to have to insist that you eat some. You see, I don’t like cooked carrots either, but if I don’t set a good example, my kids won’t eat them. And if I have to eat them, so do you.” I suppressed my distaste and took some cooked carrots.

The following week, I was at a conference in another town. John and Wendy were there too with their family. Meals were served cafeteria-style, and one evening at dinner cooked carrots were on the menu. I wasn’t sitting at the same table as Wendy so I needn’t have taken any, but I looked over and saw that she had a few on her plate, and was clearly trying to avoid eating them. I felt bad, so I took a large helping of cooked carrots myself. Then I walked over to Wendy’s table and scraped my carrots onto her plate. I smiled, remembering my sore finger; she gave me the Glare of Death, but couldn’t say anything because her kids were watching.

Meanwhile, the results of the blood test still weren’t back, and I was getting antsy. Each day I checked the mailboxes at the conference center for an envelope addressed to me, but nothing appeared. The following evening, however, there in the “K” box was an official-looking envelope with my name on it. I opened the letter and read the typewritten report:

And inside, wrapped in foil, was a small piece of cooked carrot.

I eventually made a full recovery. But ever since then, I’ve eaten my cooked carrots, just as a precautionary measure. You can never be too careful when it comes to malaria.

Note: This is an updated version of an article that originally appeared on Interesting Thing of the Day on October 31, 2003, and again in a slightly revised form on December 21, 2004.