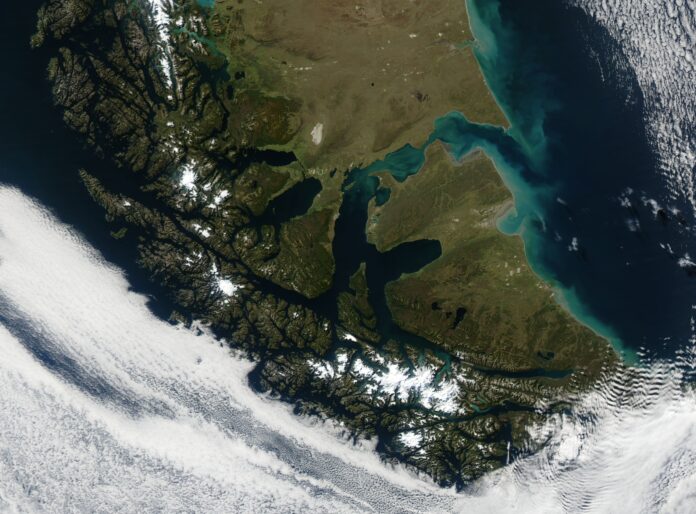 As an American, I’ve always been accustomed to clearly defined state, national, and continental boundaries. The border between Canada and the United States, for example, may be an arbitrary line of latitude, but we all know exactly where it is—what’s in, and what’s out. We know exactly where North America stops and Central America starts; we also know when we’ve reached the easternmost or westernmost edge of the continent because we run into an ocean. Sure, there’s the odd island off the coast here or there, but conceptually, these cause no problems for my notion of what a continent is.

The map of South America, though, has always offended my sense of geographical tidiness. At the southern end of the continent, the land sort of swoops out to the east—but wait, that last big chunk is actually an island. Is that part of the continent? And what about the bazillions of smaller islands littering the coastline to the south and west? If I’m on one of those islands, am I on the continent or not? The geological answer is yes—I’m on the same continental plate. The political answer is also yes—any given spot of any given island is uncontroversially under the control of either Chile or Argentina. But to the average person on the street (or boat, as the case may be), these boundaries are neither visible nor intuitive. Today, we can get the answers to such questions from highly accurate maps. Hundreds of years ago, though, the answers were far less obvious. Speculation about continental boundaries led to some fanciful maps, tall tales, and grand adventures.

I was standing in a museum in a town on Tierra del Fuego—a name given to the entire archipelago of little islands at the tip of South America as well as to its largest island, which is known more properly as Isla Grande de Tierra del Fuego. (For other articles I’ve written here about Tierra del Fuego, see Ushuaia, Extinction of the Yámana, and Pan del Indio.) On the wall was a map from the 16th century showing the landmass we know today as South America extending all the way south to connect with a vast southern continent much larger than Antarctica. In other words: an unbroken stretch of land all the way from pole to pole. This hypothetical continent, which also encompassed Australia, had a detailed imaginary coastline that was represented as being accurate, even though no cartographer had come anywhere near it. Europeans at the time referred to this continent as Terra Incognita (the Unknown Land)—or Terra Australis (the Southern Land). In the 4th century BCE, Aristotle had advanced the idea that a great southern continent must exist, because without it the world would be top-heavy. This view was later expanded on and popularized by Greek geographer Ptolemy in the 2nd century CE. But as of the early 16th century, no European had actually seen this land.

In 1520, Ferdinand Magellan became the first European explorer to discover a sea route from the Atlantic ocean to the waters west of South America, to which he gave the unfortunate name “Pacific ocean.” But as he was passing through what came to be called the Strait of Magellan, with South America clearly on his right, Magellan could also see land to his left. When he realized the channel went all the way through, he drew what was for him the logical conclusion: that land he’d seen to the south must be the tip of the great southern continent. He gave it the name Tierra del Fuego (“land of fire”) upon seeing the smoke rising from numerous fires built by the land’s inhabitants. This name, of course, suited the continent’s popular image as a mysterious and forbidding place. And Magellan’s discovery—apparently the first proof of the existence of Terra Australis—required only minor modifications to the maps of the time.

It was not until 1578 that Francis Drake, in an attempt to circumnavigate the globe, discovered the truth about Tierra del Fuego. Drake sailed through the Strait of Magellan, but his ship was blown south by a storm; he soon found himself rounding the tip of a large island chain. Now there was another way to get between the oceans—the Drake Passage. Although Drake did not sail all the way to Antarctica, he again drew the logical conclusion that it must be down there somewhere—as in fact, by chance, it was. Shortly thereafter, in 1616, Cape Horn—at the tip of Horn Island—was identified as the southernmost point of land that could be construed as part of South America. In the 18th century, captain James Cook discovered the location of Australia—and that it, too, was not the imagined southern continent, its new name notwithstanding. Only in the early 19th century did explorers first set foot on Antarctica and begin to correct the old maps once and for all.

All of the foregoing is, I’m sure, familiar to anyone who (unlike me) actually paid attention in history and geography classes. But it was a revelation to me, looking at an old map in a museum, that assumptions about the nature of the world—unsubstantiated though they were—could have led to such startling errors, such blatant (if well-meaning) fabrications, and so many years during which myths were misrepresented as fact. True or not, deeply ingrained beliefs die hard. If you never thought you could learn anything from history, keep this little lesson in mind as you read today’s news.

Note: This is an updated version of an article that originally appeared on Interesting Thing of the Day on February 22, 2005.