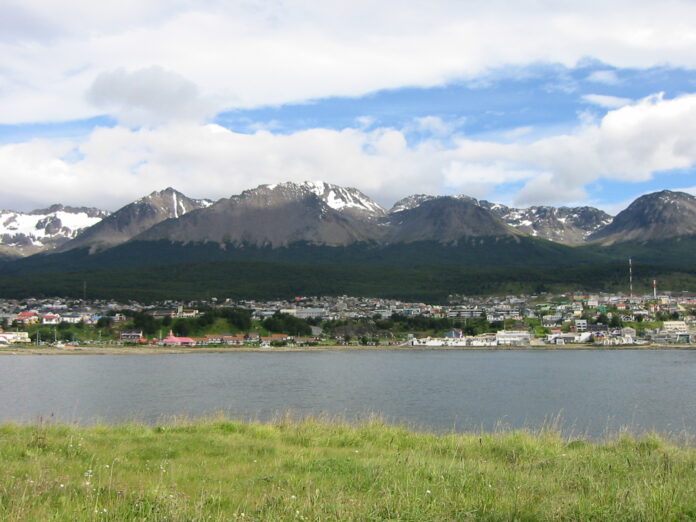 In my travels, I’ve been to a lot of remote places that I’ve referred to jokingly as “the end of the world.” That’s just a figure of speech, of course, but on a trip to Patagonia in 2004, I at least got to visit the most distant region of land I could reach from my home without crossing an ocean—the islands of Tierra del Fuego, at the southern tip of South America. I did not go to the most distant of these islands, but there would have been little to see there anyway. I did, however, spend several days in a place that bills itself as the end of the world, or “fin del mundo” in Spanish: Ushuaia, Argentina.

Because of this city’s unusual location, any discussion requires a number of qualifications and definitions. Even saying its name is potentially problematic. The guide books we’d read before going to Argentina said to pronounce it “oo-SWY-ah,” so we did. And so did everyone else we met in Argentina—until we reached the city itself. There, the local pronunciation was invariably “oo-SHWY-ah,” which is arguably closer to the original pronunciation of the name in its language of origin, Yámana (pronounced “SHA-ma-na,” but that’s a story for another day). The name means, roughly, “bay that penetrates to the west,” which is reasonable enough.

The End of the World as We Know It

The marketing hype declares Ushuaia to be the southernmost city in the world, and it is undoubtedly this distinction, more than any inherent characteristics of the place, that’s responsible for bringing so many tourists. Whether or not you agree with this assessment depends chiefly on your definition of “city.” Some argue, for instance, that the title “southernmost city in the world” belongs to Puerto Williams, Chile, located on Isla Navarino just southeast across the Beagle Channel from Ushuaia. Puerto Williams, however, consists basically of a naval base with a small town of 2,500 or so residents; calling it a city is a bit of a stretch. (And if you’re going to stretch that far, you have to start wondering about even smaller settlements still farther south.) Meanwhile, there are others who say that even Ushuaia, with its population of about 60,000, is itself merely a large town. But no city farther north would dare lay claim to the title, and Puerto Williams is no match for Ushuaia’s army of souvenir vendors.

Considering that Tierra del Fuego was once thought to be part of the great unknown southern continent, as Australia was, I find it especially interesting that Ushuaia was also once a penal colony. Although Anglican missionaries settled there in 1871, Ushuaia was little known until 1902, when the government of Argentina established a prison there to house the country’s most dangerous and notorious criminals. The prison’s security was relatively lax; guards knew that prisoners ultimately had nowhere to run, and several escapees voluntarily returned to the prison rather than risk death from starvation or exposure. The prison remained in operation until 1947; it’s now a museum and one of the city’s most popular tourist attractions. Later, Argentina set up a naval base on the same site, but as of the early 1970s, Ushuaia’s population was only about 5,000. As a way to lure more people to the area, the government offered extremely generous tax incentives to businesses that chose to set up operations in Ushuaia. This had the desired effect—and now manufacturing and other industries employ many of Ushuaia’s residents.

Been There, Done That, Got the T-Shirt

Tourism, naturally, is another big industry, and the city has some fantastic hotels, restaurants, and shops. There at the end of the world, you can find a coffee shop (with internet access) almost literally on every corner; and anything you may want to buy, from cars to giant TVs, is readily available. The business district is just a short walk from the port where cruise ships dock on their way to and from Antarctica (about 1,000km [600 miles] away); in between, you’ll pass by several casinos and at least half a dozen travel agencies, which seemed oddly out of place in a town that’s supposed to be the ultimate destination.

Although it was summer in the southern hemisphere when we visited, it was chilly—but the temperature seemed somehow appropriate given the backdrop of gorgeous, snow-capped mountains. Within a short drive you could find pristine wilderness, well-kept national parks, skiing, and almost any other kind of outdoor recreation. The business district was noisy, and traffic on the main streets was heavy. Automobile exhaust, along with dust from some of the roads that were unpaved, made for less-than-ideal air quality, despite the fact that Ushuaia is in a windy region and right on the ocean. Still, we found the town extraordinarily endearing—quaint, friendly, and (as far as we could tell) safe. And yes, I did buy the obligatory “fin del mundo” t-shirt. I wear it proudly.

Note: This is an updated version of an article that originally appeared on Interesting Thing of the Day on February 23, 2005.