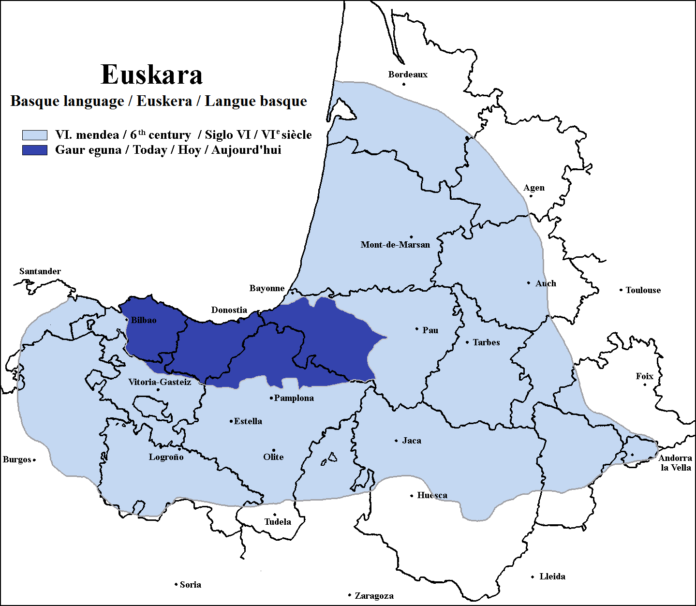 There are around 7,000 different languages spoken on Earth (many with numerous distinct dialects), not to mention a great many extinct languages with no living speakers. Every one of these languages is certainly interesting in its own way, though I’ve only called special attention to a few of them, such as Klingon, Bahasa Indonesia, Walloon, Pennsylvania Dutch, and Esperanto. The vast majority of natural languages (which would exclude the likes of Klingon and Esperanto) are related historically to numerous other languages. English is an obvious example, with a huge number of vocabulary words coming from Latin, Greek, Italian, German, and pretty much everywhere else. You can plot out how languages branch out from a common source and become more and more diverse. English and about 400 other languages form a “tree” known as the Indo-European language family. All the languages in this family’s 12 distinct branches are thought to have developed from a single hypothetical source language, dubbed “Proto-Indo-European.” Most of the world’s other languages similarly appear as part of a large family.

Every once in a while, though, linguists encounter a language that doesn’t seem to fit into any of the families. That is, when you analyze its vocabulary, sentence structure, and other characteristics, there’s no clear proof that it’s historically related to any other living language. It’s as though the language simply appeared out of nowhere thousands of years ago. Such languages are called language isolates, and about 100 of them are known to exist. Although some of these (including Japanese and Korean) have a huge number of speakers, most are spoken by much smaller groups of people—sometimes, but not always, geographically isolated groups. But what’s really surprising is when you find a language isolate in a geographical area where all the other surrounding languages are part of a single family. Such is the case with Euskara, the language of the Basque people in northern Spain and southwestern France.

Basking in the Sounds of Basque

Euskara (sometimes spelled Euskera) is often known simply as “Basque,” though the Basque word for “Basque” is euskara, if you follow. I’ve not seen a single website that explains clearly and correctly to English-speaking folk how you pronounce this word, so allow me to take a shot at it before we proceed. That first pair of vowels, eu, is a diphthong, much like oi or ow in English. So it’s made by slurring two vowel sounds together: the e sounds roughly like the question word “eh” and the u is like the oo in “food.” But you have to run them together so they sound like a single syllable, which we don’t have in English, “eh-oo.” The s is pronounced sort of halfway between an English s and sh, and the r is flapped like a Spanish or Italian r, so it sounds more or less like a d. All together, it’s “[eh-oosh] KAH dah” (more or less).

I found a Basque radio station that streams audio over the internet and listened to people speaking Euskara for a little while. The overall sound of the language was somewhat reminiscent of Spanish—which is to say that if I didn’t actually know any Spanish, I might plausibly have guessed from the sounds, intonation, and cadence, that that’s what I was listening to. However, I may have been hearing speakers whose first language was Spanish, and who therefore were speaking with an accent.

Euskara’s direct ancestor, an ancient language called Aquitanian, was spoken in western Europe many thousands of years ago—in fact, earlier than Latin or any of the other Indo-European languages. Of course, numerous other languages were common back then, too, but for reasons that are not entirely clear, only Euskara survived while all the others died out. The early origins of the Basque people, like their language, are the subject of much debate. Some claim that the Basques came from Atlantis or some other lost civilization, and a few even propose extraterrestrial origins. Serious scholars say that’s all ridiculous, while admitting that they can only say where the language did not originate, which is, apparently, everywhere. Euskara has been compared to virtually every other language, and certain similarities have been noticed to Iberian, Caucasian languages, Etruscan, Sumerian, Semitic languages, and even South American languages—among many others. But most linguists who have studied Euskara in detail believe that these similarities are slight and accidental—that this truly is a unique language with no provable connections at all.

Like all languages, Euskara borrows some terms from other languages, but it has lent relatively few. Several English words that come from French or Spanish are said to have earlier roots in Euskara; these include bizarre, chaparral, and silhouette. The French surname Silhouette, from which we get the English word, was apparently derived from a Basque surname meaning, approximately, “lots of holes.”

Although Euskara is said to be easy to learn, it has some features that are extremely rare in any language. (I know you were counting on me to explain what “ergative-absolutive alignment” is, and I’m sorry to let you down.) Nouns can be modified in hundreds of thousands of ways, but apparently this all makes perfect sense once you get the hang of it.

Euskara has about 538,000 speakers, and is an official language in the region of Spain with a large Basque population—though not in France. There are at least six dialects, but a unified version called Batua is taught in schools and being promoted as the new standard, especially for those learning Euskara as a second language. It’s in no immediate danger of dying out, but after surviving the onslaught of many European languages over the millennia, it’s still threatened by all the usual forces that induce people to prefer a lingua franca to a strictly regional language. But you never know…given enough time, maybe we’ll discover it’s really the galactic standard.

Note: This is an updated version of an article that originally appeared on Interesting Thing of the Day on May 27, 2005.