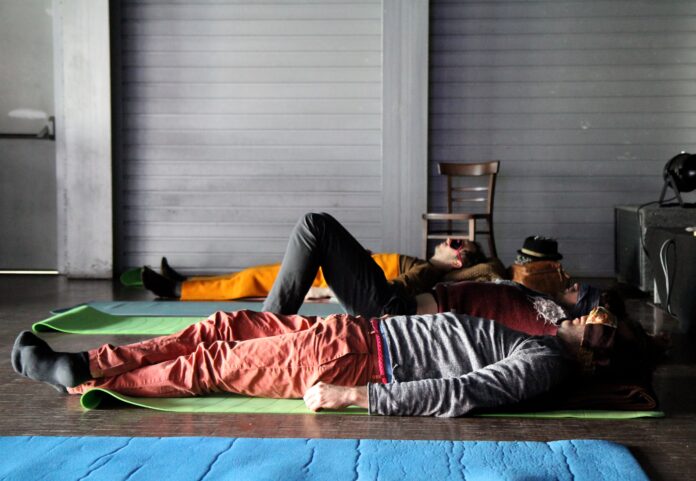 I recall being unenthusiastic about taking naps as a child, much to the consternation of my parents. Fortunately, as with so many other childhood dislikes, that attitude disappeared as I got older. By the time I was in college, I had realized naps were among the most wonderful things in life, right up there with chocolate and computers. I love a good nap.

As much as I enjoy napping, though, it’s easier said than done. For a number of years, my job involved sitting behind a desk in an office all day, and my employers would have frowned upon my spending any portion of the workday asleep. And so I conquered the early-afternoon sleepies with caffeine instead. These days, it’s my kids’ school schedules more than anything else that interfere with a good afternoon nap. But I always felt that countries where siestas were common had it right: people tend to get drowsy soon after lunch, and when they’re drowsy, they’re less effective at their jobs. If, instead of suppressing the urge to sleep, we give the body what it wants, we end up being more alert and more productive.

So I’ve been delighted in recent years to notice that this message is finally getting through to businesses in industrialized countries. All it took was a change in terminology. No longer do we take catnaps; instead, we take power naps. Unlike “dozing off,” which is presumably involuntary and thus a sign of laziness, power napping is deliberate and thus a sign of responsibility. People take power naps to enable them to get more work done and endure longer work hours, things employers tend to like. Although I’m not a fan of long workdays either, I’d certainly rather work long hours with a nap than without.

The term “power nap” was coined by James Maas, a psychology professor at Cornell University. In his 1997 book Power Sleep, Maas made the case for napping as a legitimate tool for enlightened businesspeople, parents, and anyone else with a busy schedule. Numerous studies in recent years have shown that napping can be amazingly effective in improving alertness, memory, and overall cognitive performance, not to mention one’s mood.

However, opinions among sleep researchers differ when it comes to the ideal length for a power nap. Twenty minutes or so seems to be a popular length—it’s long enough to be demonstrably effective without allowing you to fall into deep, REM sleep, from which it can be harder to awaken. On the other hand, some studies suggest that an hour-long nap, including a REM phase, may be much more effective, proportionally speaking, than a half-hour nap. But if you awaken during a particularly deep part of the sleep cycle, the nap can have the opposite of the desired effect, making you feel groggy for hours afterward. And if your nap is too long, it can also prevent you from sleeping properly at night. The solution is to experiment and find the nap length that works best for you. Ideally you’d time yourself so that you wake up at the end of a natural sleep cycle, but because most of us can’t precisely control the moment at which we fall asleep, this is tricky to do without the use of expensive monitoring equipment. (Personally, I’d find a 20-minute nap break almost useless, because it often takes me nearly that long to fall asleep in the first place.)

Power napping can help to overcome sleep debt, making it feasible for some people to sleep fewer hours at night than they normally would. However, experts warn that napping shouldn’t be considered a substitute for a solid night’s sleep. While any given person may need more or less than the 8 hours dictated by conventional wisdom, even power naps can’t keep a person healthy and sane with only a few hours’ sleep per night. (Polyphasic sleep may be a way around this constraint, but it relies crucially on several carefully spaced naps during the day!)

Putting the Power in Power Naps

Nothing could be more natural than sleeping, but judging by the numerous power-napping gadgets that have appeared on the market, you shouldn’t try this without technological assistance. You might start with recordings of soft music and soothing voices guiding you into, and out of, your nap. Or, move up to audio with embedded binaural beats, which help to coax your brain into quickly achieving a restful state. You can buy apps that create audio sleep sessions on your smartphone or tablet. And if your office chair isn’t comfy or private enough for a nap, you may be able to find a nearby MetroNaps EnergyPod—a sort of lounge chair with a large bubble over the head to reduce outside noise and light. Slip into the chair, put on the noise-cancelling headphones with soft music playing, and you’re all ready for a 20-minute power nap. Of course, this nap will cost you more than lunch, but just think how much more money you’ll make with a clear head.

As for me, when I decide to rest in the afternoon, it usually turns out to be a literal catnap. That is to say, as soon as I lie down on the couch, my cat cuddles up with me. After licking my neck for a few minutes, she’ll fall asleep, and shortly thereafter, so do I. When she’s decided I’ve slept long enough, she starts meowing. It’s an admittedly low-tech approach, and the cat’s snooze alarm feature is unreliable. But there’s just nothing like a power catnap to improve my energy level and my spirits.

Note: This is an updated version of an article that originally appeared on Interesting Thing of the Day on November 1, 2006.