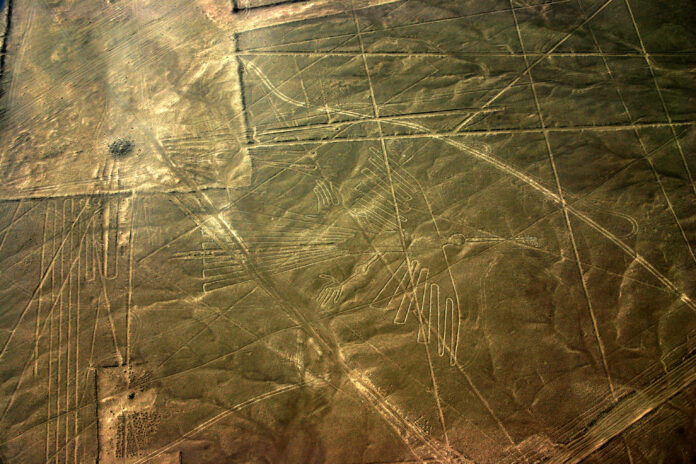 There are certain sites in the world that inspire intense curiosity about their origins, like the Stonehenge formation or the statues on Easter Island. These ancient human-made structures cause us to wonder what was in the minds of those who created them, what purpose did they serve? Another intriguing example of this type of site is the Nazca Lines of Peru, an extensive set of patterns drawn into the Nazca Desert over 1,500 years ago.

The Nazca Lines are a series of negative geoglyphs—patterns drawn on the ground by adding (positive) or removing (negative) stones or soil. Other examples of geoglyphs include labyrinths, burial mounds known as intaglios, and so-called “hill figures”—shapes cut into hillsides to reveal the chalk beneath, most often found in England (such as the Uffington White Horse).

The term “Nazca Lines” refers collectively to hundreds of large designs drawn on the surface of the Nazca Desert. They’re thought to have been created between 200 BCE and 600 CE by the Nazca, a culture known for its distinctive pottery and intricate textiles. This desert, an arid plateau located between the Andes and the coast of Peru, has a very particular topography and climate that allowed for both the construction and the preservation of the figures.

Instead of a sandy surface, the Nazca Desert floor is covered in a layer of pebbles made red through oxidation. Various designs, ranging from straight lines and geometric forms to intricate figures of animals, insects, and humans, were created by removing these pebbles, exposing the lighter-color soil beneath. The lack of wind and rain in the area meant that these figures were not disturbed since their creation thousands of years ago until they were rediscovered in the modern era.

Eyes in the Sky

A curious trait of the Nazca Lines is that they are difficult to identify from the ground; given their tremendous scale, they are much more recognizable from above. Thus it was not until the 1920s, when airplanes began flying over the area, that they were seen in their full aspect. This peculiarity led scientists and amateurs alike to ponder both the how and the why of these formations: How did the Nazca people create these large-scale designs without seeing them from above, and why would they have created them this way in the first place?

An early attempt to answer these questions came from Paul Kosok, an American archeologist, and his one-time assistant, Maria Reiche. Kosok, and Reiche after him, believed that the lines were a type of astronomical calendar, showing the alignment of different planets and stars as they rose above the horizon.

Reiche, who took over the study and mapping of the lines after Kosok left the project in 1948, eventually became its premiere advocate and guardian. Born in Germany and educated in mathematics, geography, and languages, Maria Reiche first went to Peru in 1932 to work for the German consul in Cuzco as a nanny and teacher for his children. She began working with Kosok in 1940, and spent the rest of her life preserving and studying the lines, until her death in 1998.

Although the astronomical calendar theory has raised doubts—including the observation that the multitude of lines and their varying orientations could be found to correspond with almost any trajectory and the fact that astronomical alignments have changed with time—Reiche made a huge contribution to the study of the lines. Her advocacy brought heightened attention to their existence, and resulted in their designation as a UNESCO World Heritage Site in 1995.

Reiche believed that the Nazca had created the lines using grids, making smaller versions of the drawings and then transposing them onto a larger design. She even found markings she believed showed this initial process near some of the figures. Although the use of this method cannot be confirmed, there is evidence that the Nazca used some form of surveying technique in their production of the designs. Wooden pegs, dated to the time of the Nazca, have been found near the ends of long lines, implying they were used as markers of some kind.

The Nazca were very able weavers, and this ability could have translated into general pattern-making facility as well. Also, there is a similarity between figures they used on their pottery and some of the geoglyph forms. This seems to indicate their aptitude and predisposition to be the creators of the figures.

Nevertheless, some have publicly doubted the Nazca’s ability to create such works, given their earthbound perspective. Chief among these doubters is the Swiss author and UFO theorist, Erich von Däniken (of Mystery Park fame), who claimed in his 1968 book, Chariots of the Gods, that the Nazca Lines were in fact landing strips for alien spacecraft.

Another attempt to explain how the Nazca could have created the lines, when they are only fully visible from the air, was made by Jim Woodman in the late 1970s. He believed that the Nazca could have constructed basic hot air balloons, using materials available to them, in order to survey their designs from above. To prove this point, Woodman and balloonist Julian Nott set out to create a prototype of such a balloon and to attempt flight. They created a balloon out of cotton fabric, inflated it using only the heat from a wood fire, and attached a reed basket to it as their gondola. They did manage to get airborne, but this success does not prove that the Nazca did so too.

In response to this kind of speculation, Joe Nickell of the University of Kentucky set out to reproduce one of the Nazca figures (a 440-foot-long [about 130m] condor) without recourse to aerial observation. With the help of friends and family, and using a method of measuring points on a smaller version of the design to corresponding points on the larger design, in a matter of days he succeeded in producing a close likeness of the Nazca condor, sketched out in white lime on a Kentucky field.

While most scholars now believe the lines were created by the Nazca, most likely without aid from above, the question of their purpose remains unanswered. What was the motivation for this huge undertaking?

Given their size and their complete visibility from the air, the lines may have served some religious purpose, made for the benefit of celestial beings. The recent discovery of the ancient town of Cahuachi, located near the lines, lends credence to this theory. Archeologists studying the site believe that the town was a pilgrimage center to which people would come before visiting the lines.

Although there is no record of how the lines might have served in religious ritual, some now believe that ancient pilgrims might have walked along the lines as a show of devotion to a particular sacred entity, much as labyrinths were used in medieval cathedrals in Europe, and to a certain extent today.

Some people believe that the lines correlate with underground water sources, a key piece of knowledge in such an arid environment; the religious ritual might even have pertained to ensuring adequate water supplies in this drought-prone area.

Keep Off the Beaten Track

Whatever their purpose, for the first time in their long history, the Nazca Lines are now threatened with serious defacement. Although prohibited, there has been extensive foot and vehicular traffic over the lines in recent years, particularly by looters stealing artifacts from the ancient tombs in the area. Also contributing to the problem is increased tourist activity and the nearby Pan-American Highway.

After the environmentalist group Greenpeace staged a protest near one of the formations in 2014, damaging it in the process, Peru received a grant from the United States to better study and preserve the Nazca lines. As part of that initiative, new drone and mapping technology revealed the presence of 50 previously unknown geoglyphs, thought to be the work of an earlier civilization than the one which created the already-known formations.

This is an encouraging development, and brings hope that the situation can be turned around and the Nazca lines can be protected. It would be truly unfortunate for these fascinating structures to be lost after resisting destruction for so many centuries.

After all, they are not only a part of the rich cultural heritage of the area—which also includes the remains of the great Inca empire—but they offer a unique chance to put oneself into the minds of those who lived so long ago. This is what makes the Nazca Lines so fascinating for modern folk: their inscrutable mystery, which has lasted over the course of centuries.

Note: This is an updated version of an article that originally appeared on Interesting Thing of the Day on July 5, 2006.