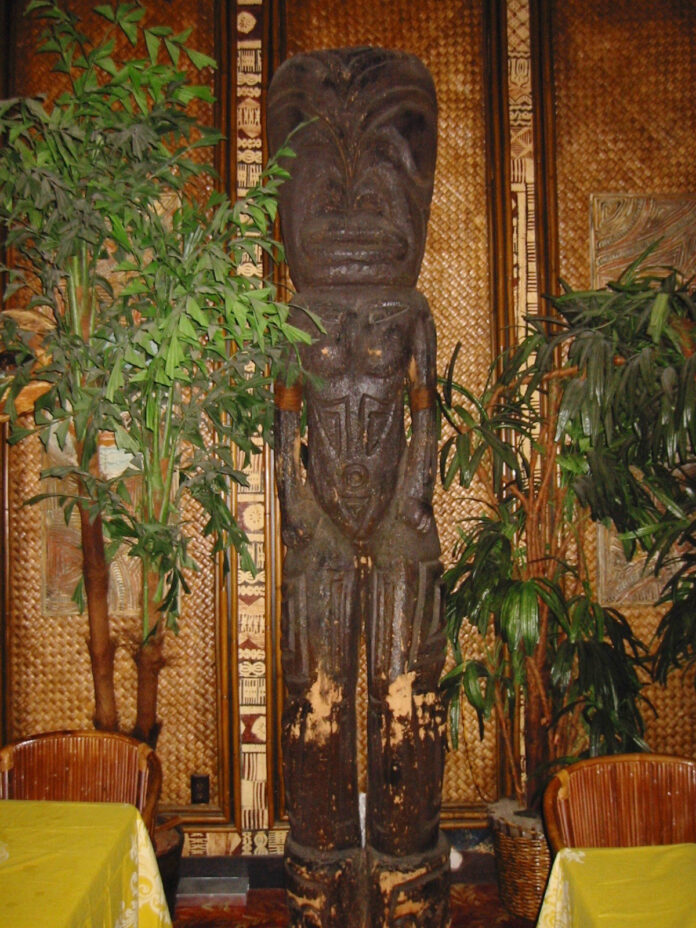 One day I walked into one of my favorite mom-and-pop variety shops and saw a big display of everything Tiki—a Tiki bar, Tiki glasses, Tiki masks, Tiki statues, Tiki books. My initial reaction was, “Ah, another cheesy American fad is reborn,” followed quickly by, “Cool! I need to own this stuff.” What can I say? I’m a sucker for faux culture, especially exotic faux culture—and particularly when it involves interesting drinks. But I soon realized that I had only ever heard the word “Tiki” used as an adjective. I didn’t know what a Tiki actually was. I could identify Tiki-themed merchandise easily enough, but I wasn’t quite clear what culture it was supposed to represent. So I decided to do some research.

My first step, of course, was to watch the film Pirates of the Caribbean. Other than being set in the wrong ocean, it was a good way to get those Tiki juices flowing. After all, it does involve islands and rum. But it made me hark back to the attraction of the same name that I’ve visited at both Walt Disney World and Disneyland. This, in turn, reminded me of yet another notorious Disney attraction which is also populated by those ubiquitous Audio-Animatronic characters—namely, the Enchanted Tiki Room. Ah, now we’re getting somewhere. So my next stop was the closest approximation of the Enchanted Tiki Room I could find in San Francisco, where I was living at the time: a restaurant called the Tonga Room. And what luck: just in time for happy hour and an all-you-can-eat buffet. At last I was getting somewhere.

The Tonga Room, like any good Tiki bar, is dark and funky, with a nautical feel, fake palm trees, and lots of large carved wooden statues. Unlike most Tiki bars, however, this one has a pool in the middle, with a floating raft that functions as a stage for the band. And every 20 minutes or so, visitors are treated to an authentic artificial Pacific thundershower. Morgen and I sat down, ordered scary-sounding tropical drinks, and loaded up our plates with vaguely Pacific-looking treats—basically a dim sum selection and a number of dishes involving pineapple. There could be no doubt that we were at last having a genuine Tiki experience. But the question still nagged at me…what does Tiki actually mean?

As I learned after some research on the web, a Tiki is a carved statue representing a Polynesian god. OK, fair enough. But it turns out that “Polynesian” is a fairly broad and ambiguous term, as Polynesia covers a vast expanse of the Pacific Ocean—from Easter Island to Hawaii to New Zealand—and the cultures and languages represented are numerous and heterogenous. In some part of Polynesia, apparently, islanders once made and worshipped statues referred to as Tikis. So what does that have to do with a wacky American fad?

In the 1930s, bars and restaurants in southern California began to adopt South Pacific themes, as Americans were just starting to discover Polynesian foods and cultures. A man named Ernest Gantt, who later changed his name to Donn Beach, was the leading figure in this movement. In an effort to lend some authenticity to the bars, owners adorned them with artifacts from various Pacific islands, and Tiki statues soon became regular fixtures. Put a Tiki in a bar and, ipso facto, you’ve got a Tiki bar. And what would a theme bar be without special drinks? So bar owners invented strong, fruity drinks with exotic names like “Mai Tai”—often served in Tiki-shaped glasses—even though the drinks themselves had nothing to do with Polynesia. Neither, for the most part, did the food or music that became part of Tiki culture; like the décor, they were composed of bits and pieces from lots of different places, along with a healthy dose of imagination. Ironically, the very effort to make Pacific-themed bars more “authentic” eventually led to the creation of a pseudoculture that didn’t resemble anything in the real world. But that didn’t stop it from taking on a life of its own.

Tiki culture soon got another boost. According to Polynesian folklore, the earliest inhabitants of the Polynesian islands had come from South America, led by a mythical figure named Kon-Tiki. But it was popularly believed that such a long voyage would have been impossible using the technology available when the first settlers would have arrived. In 1947, a biologist named Thor Heyerdahl set out to prove the feasibility of such a trip. Along with five assistants, he built a balsa log raft (which he also named Kon-Tiki) and drifted 4,300 nautical miles from Callao in Peru to the Raroia atoll in Polynesia. The trip took three months and was quite treacherous, but it proved that it could be done. Heyerdahl’s book about his adventure quickly became a best-seller, reinforcing Tiki mania.

In most parts of the United States, Tiki bars died out before disco. But in keeping with the modern “retro is good” meme, Tiki is experiencing a renaissance, thanks in large part to the efforts of artist Bosko Hrnjak, who lives in Escondido, California—not far from my current home in San Diego—and creates much of the Tiki paraphernalia you’ll see at Tiki bars. I couldn’t be happier. I missed the Tiki fad the first time around, and of all the imaginary cultures I’ve experienced, Tiki is among my favorites.

Note: This is an updated version of an article that originally appeared on Interesting Thing of the Day on August 24, 2003, and again in a slightly revised form on July 14, 2004.