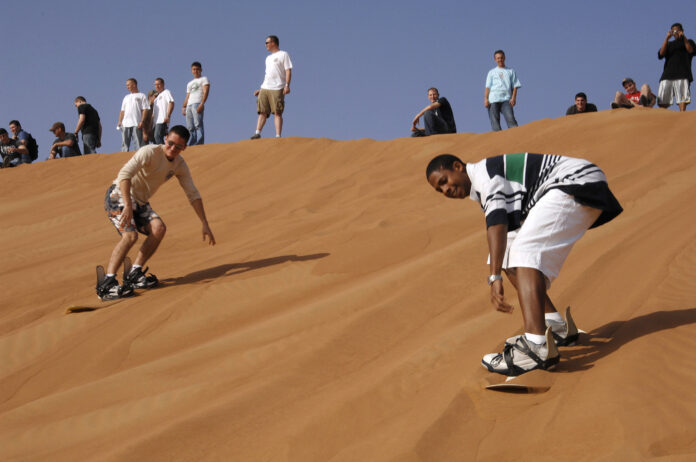 It was in a high school English class that I first ran across Emerson’s famous quote, “A foolish consistency is the hobgoblin of little minds…” Something about that struck a chord with me, and ever since, I have tried to nurture a healthy appreciation for paradox if not outright contradiction. For example, as I may have mentioned, sports are not among my top thousand or so favorite things in life. So I was chagrined to discover how many of the suggestions I received for topics to include on Interesting Thing of the Day were sports-related. Someone would very excitedly come up to me and say, “Hey! You’ve got to write about this cool piece of tennis trivia,” or “There’s this really amazing baseball story your readers would love to hear,” and I’d kind of grin and nod and pretend to make a mental note, all the while thinking there could hardly be anything less interesting to write about than sports. However, when my son Ben suggested an article on sandboarding, I had to admit that did sound sort of interesting—and at least I didn’t have to participate in it. So in the noble spirit of contradiction, I set out to discover what I could about this sport.

Getting Board with Sand

Sandboarding resembles snowboarding as seen through amber glasses. The general idea is the same; participants strap a short board to their feet and slide down a hill, only in this case the surface is sand rather than snow. Sandboarders sometimes say the experience is more like surfing than snowboarding, an impression undoubtedly enhanced by the lack of heavy clothing. As in snowboarding, the sport is sometimes recreational, sometimes competitive; some participants focus mainly on speed, others on acrobatics and tricks. But one of the biggest differences is that sand dunes don’t have lifts; to get to the top for a run, you must hike or take a four-wheel-drive vehicle (euphemistically known as a “chair lift”)—and a friend to drive it back down the hill. Unlike snow-covered mountains, sand dunes are constantly changing size and shape due to shifting winds, making fixed installations of lift equipment impossible.

The sandboards themselves are superficially very similar to snowboards, which is to say they’re about the same size and shape, and use similar bindings. However, since sand is much more abrasive, and with much higher friction than snow, some modifications are necessary to keep the boards running smoothly and to keep them from getting chewed up rapidly. The bottom surface of most sandboards is covered with a tougher, more slippery material than wood—often Formica or ABS plastic, though stainless steel is sometimes used as well. The choice of material must be matched to both the type of sand on which it will be used and the intended effect (lighter materials for acrobatics, slipperier ones for speed). Some riders wax their boards to reduce friction further and prolong the life of the board, but even under the best conditions sandboards wear out even more quickly than snowboards.

I initially assumed that sandboarding was a recent invention, a simple snowboarding knock-off. This is only approximately correct, however. On the one hand, sandboards have appropriated snowboard technology, and attracted snowboard riders, only in the last few decades. But there is evidence that ancient Egyptians were sliding down sand dunes on pieces of wood or pottery 3,000 years ago. Modern, upright sandboarding is believed to have been invented in Brazil in the 1940s. In recent years, though, advances in materials and techniques have led to much faster speeds and longer jumps than ever imagined before—professional sandboarders routinely reach speeds in excess of 60 mph (100 kph) and jump distances of 50 feet (15m) or more.

Sandboarding can be done anywhere there are sand dunes—which is a surprisingly large number of places. Certainly the deserts of Africa, Australia, and California are natural choices, but suitable sand dunes can be found all over the world—from Chile to the Athabasca sand dunes in Saskatchewan, Canada, from China to North Wales. The international sandboarding championships are held annually in Nurnberg, Germany, attracting as many as 50,000 fans. Florence, Oregon is the proud home of the world’s first sandboarding park, called Sand Master Park.

I should perhaps mention that, as sports go, the ones that involve standing on a board and moving very fast are among the last I’d personally be inclined to try. Whether the surface is water, snow, concrete, or sand, that whole mode of movement just doesn’t appeal to me. I do like the idea of sandboarding, especially the fact that it’s not as commercialized as snowboarding. But I think I’ll start out with sand tobogganing—or maybe just hold out for the 3D force-feedback sandboarding computer game, undoubtedly coming soon.

Note: This is an updated version of an article that originally appeared on Interesting Thing of the Day on July 15, 2003, and again in a slightly revised form on February 13, 2005.