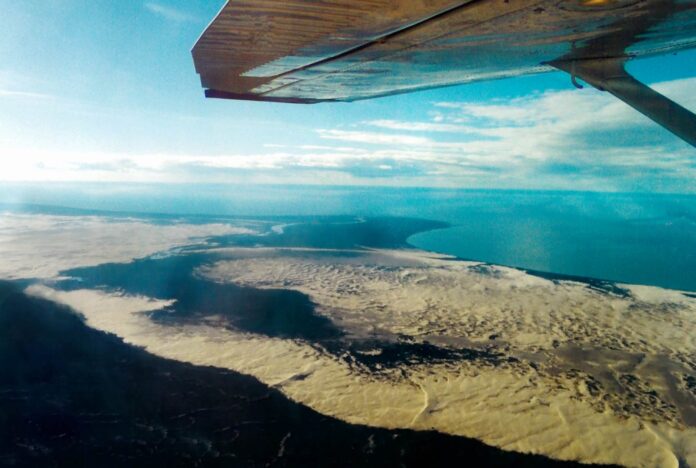 Picture of a part of the world covered with enormous sand dunes. You may be thinking of a desert in Africa, Asia, or the southwestern United States. But there’s another place, above the 49th parallel, where you can find such sand dunes—Saskatchewan, Canada. Many people associate Saskatchewan with its prairie landscape, but although the southern half of the province—where you’ll find major cities such as Regina and Saskatoon—is mostly prairie grasslands, the northern half is a wild expanse of rivers, lakes, and coniferous forests. In its south-central region it even has a salt lake with a salinity that is half that of the Dead Sea, Little Manitou Lake (Cree for “Lake of Good Spirit”). And Cypress Hills, in the southeastern corner of the province, is the highest point in Canada between Labrador and the Rockies. This diversity is not so surprising when you consider that Saskatchewan is twice the size of Italy and almost as big as Texas.

Located in the far northwest corner of Saskatchewan, almost at the border with the Northwest Territories, the province’s largest lake, Lake Athabasca, is accessible only by floatplane, there being no roads that go that far north. On the south side of the lake is a natural geological formation that is unique and surprising to find at this northern latitude—the Athabasca Sand Dunes. In places 30 meters (98 feet) high, and stretching 100 km (62 miles) along the shore of Lake Athabasca, the Athabasca Sand Dunes are the world’s largest area of active sand dunes north of 58 degrees latitude.

Although we often associate sand dunes with deserts, in the case of the Athabasca Sand Dunes, this doesn’t hold true. For one thing, deserts are identified by their lack of water, and not only do these dunes border 7,850 square kilometers (3,030 square miles) of water, they also contain significant patches of water in places, percolating up from the shallow water table below. Another feature of deserts—limited plant and animal life—does not hold true for these sand dunes either. In fact, of the 300 plant species that grow in the dunes, there are 10 species that are endemic (found nowhere else in the world), and another 42 species that are considered rare in the province. Not that the dunes are entirely welcoming to the local flora. Because the dunes are active, shifted by wind and eroded by water, they are constantly on the move. Visitors to the region tell of seeing entire stands of skeletal trees emerging from the sand—once above ground and flourishing, these trees were slowly buried by the shifting sand, and now are revealed by further dune movements.

So, if these sand dunes are not a desert ecosystem, created by extreme drought and aridity, how were they formed? The short answer is: the glaciers did it. The sand dunes are the product of the Athabasca sandstone formation, originally a delta in a freshwater lake created out of materials eroded from ancient mountain ranges by glaciers and rivers one billion years ago. These materials were eventually compressed into sandstone, and later still, eroded by wind, water, and glaciers to create the sand dunes that exist today. Of course, I also find the native Dene legend about the dunes’ creation interesting—that a giant man speared a giant beaver, which thrashed and ground the earth with its tail, making soil into sand.

The dunes are now protected as part of the Athabasca Sand Dunes Provincial Park, but there is little infrastructure to welcome visitors. Aside from lack of accessibility (via floatplane only), there are no services available at the site. You need to be well versed in outdoor survival skills, or sign up for a guided tour. For the armchair traveler, you can see stunning photographs of the dunes on the Photo Journeys blog of photographers Robin and Arlene Karpan.

Note: This is an updated version of an article that originally appeared on Interesting Thing of the Day on July 3, 2004.