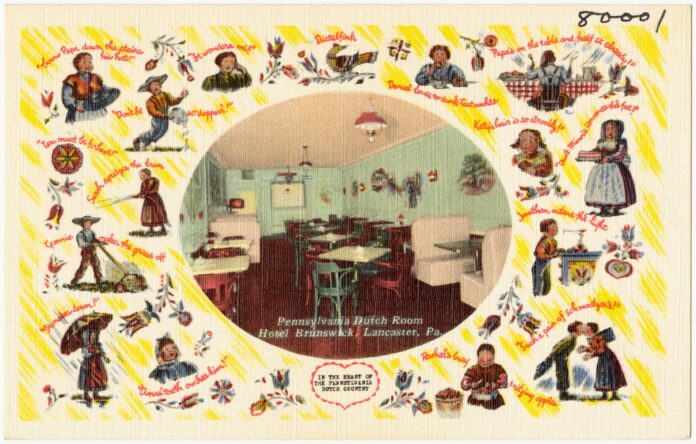 Pennsylvania is a state (well, commonwealth if you want to be completely nitpicky) known for its linguistic, uh, irregularities. In the western part of the state, where I grew up, many people speak an endearingly odd dialect of English called Pittsburghese. Some town names have pronunciations that utterly belie their foreign roots. DuBois is pronounced “dew boys”; North Versailles is “north ver-sales”; La Jose is “la Joes.” Then, of course, there are towns that simply have goofy names—Eighty Four, Slippery Rock, and Punxsutawney come to mind.

I’ve Been to Pennsylvania; Ask Me about Intercourse

But to put all these oddities in perspective, western Pennsylvanians rightly consider their geographic nomenclature downright bland compared to what you’ll encounter on the other side of the state. Drive four hours east from Pittsburgh and you’re in Lancaster County, an area that attracts tourists by the thousands each year for no other reason than that they want to be able to say they went through Intercourse to get to Paradise. (This makes for a roundabout route, as it turns out, but that’s only fitting.) Other nearby towns include Blue Ball, Fertility, Gap, Bird-in-Hand, Smoketown, and even (I swear I am not making this up) Kissel Hill. These place names seem all the more amusing because the area is known for its religious conservatism, being home to large numbers of Amish and Old-Order Mennonite folk in particular.

The other thing Lancaster County is known for is Pennsylvania Dutch—a term that can refer to an ethnic group, a language, a culture, or all three. Interestingly enough, despite the proximity of towns named Holland and New Holland, Pennsylvania Dutch has nothing to do with the Netherlands (or Belgium, where Flemish—a dialect of Dutch—is also spoken). The term is a misnomer, or at least an anachronism; the Pennsylvania Dutch came from Germany.

How did a group of German settlers in eastern Pennsylvania—and the unique dialect of German they speak—come to be known as “Dutch”? There are two main theories.

Most people assume that Dutch is an accidental corruption of Deutsch (the German word for “German”) or Deitsch (the word for “German” in the Pennsylvanian dialect). But the term may have been more of a historical accident than a linguistic blunder. Until at least the 1500s, the English word Dutch was used to refer generically to people of Germanic descent from the regions now known as Germany and the Netherlands. It wasn’t until the 17th century that the term Dutch came to be used strictly for people from the Netherlands, but by that time a number of German immigrants had already settled in Pennsylvania, and the old term may have stuck. In any case, the language of the Pennsylvania Dutch evolved into a distinct dialect of German, and is still spoken by as many as a quarter-million people.

Note: This is an updated version of an article that originally appeared on Interesting Thing of the Day on November 1, 2003, and again in a slightly revised form on December 23, 2004.