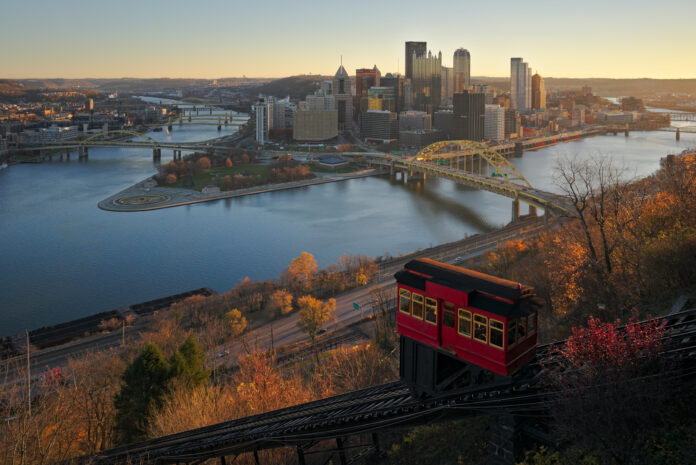 The city in which I grew up is a suburb of Pittsburgh, which is located in the southwest corner of Pennsylvania, less than an hour’s drive from both Ohio and West Virginia. Decades ago, the region’s economy was largely based on the production of steel. Pittsburgh was a busy, thriving, industrial city, and the residents—who sometimes refer to themselves as Pittsburghers—were by and large blue-collar working families. But the numerous coal-powered steel mills and factories were not kind to the environment. The poor air quality earned Pittsburgh the unfortunate nickname “The Smoky City.” When the mills and factories began closing due to the lower prices of imported steel, Pittsburgh’s air began to clear, and the ever-industrious populace reinvented the city as a center of technology, medicine, learning, and culture. Today’s Pittsburgh is a beautiful city, made all the more colorful by cultural and linguistic remnants of an earlier era’s working class.

Modern Pittsburghers may be many things, but they are not untidy. The city has entirely shed its reputation for dirt and disorder. That’s because whenever something is dirty, someone will inevitably worsh it. And if a room is disheveled, its occupant is obliged to redd it up. By the time I was six or seven years old, I had worshed my face and hands and redd up my room hundreds of times.

It All Came Out in the Wash

It was about that time when I was learning to read and encountered the strange word “wash” for the first time. I had no idea what it meant. After considering it for a while, I asked my teacher if it perhaps meant something like “worsh.” The teacher took great pains to explain that “wash” was indeed the correct spelling, but sometimes in English, words are not pronounced the way they’re spelled. That’s true enough, but I checked in a dictionary to make sure. There, right before my eyes, was the correct pronunciation of “wash” without an “r” sound in sight, and no entry at all for “worsh.” It was a profound and defining moment for me. I was devastated to realize that my family, friends, and teachers were not speaking English the way other people did, and I determined that I would not let this happen to me.

As a youngster, the most difficult thing about adjusting my language usage was figuring out which terms and pronunciations were in fact nonstandard, since everyone around me spoke pretty much the same way. My friends followed professional sports, so they were always talking about the Stillers or the Pahrits. If you wanted to see the teams play in person, you’d have to go Dahntahn where the stadium was. If it was snowing, you’d need to be cautious on the slippy roads or you might slide all the way to Ahia. To ascertain whether your companions were hungry, you’d say, “Jeet jet?” If they hadn’t, and wished to know if you had, they would reply, “No, jew?” In that case, you might want to pick up some jumbo (that is, bologna) to make a sammitch. Worsh it down with some pop and you’ve had yourself a good mill.

It Had to Be You

One of the most distinctive Pittsburgh expressions is the plural form of “you.” In the south, of course, “you” is singular and “y’all” is plural; this is often a very useful distinction. However, in Pittsburgh, the plural of “you” is “yoonz.” (No one really knows how to spell that—I’ve seen “yunz” and “yinz,” for example—but in any case, the vowel sound is more or less a schwa.) Supposedly, yoonz is a contraction of “you ones,” though I suspect most locals would be unable to articulate that etymology. The possessive form of yoonz, by the way, is “yoonz’s”: “Dats nunna yoonz’s bidness.”

I’ve seen several different dictionaries of Pittsburghese, as the dialect is called, not to mention websites and serious analyses by researchers in fields such as English, linguistics, and sociology. There are several general principles. Phonemic parsimony is an important rule, so inconvenient consonant sounds are dropped or run together. For example, library becomes “liberry,” picture becomes “pitcher,” and something turns into “sum’in.” If an L sound appears between certain pairs of vowels, it turns into a W, so dollar is “dahwer” and skillet is “skiwet.” Diphthongs are flattened, so field is pronounced “filled,” fire becomes “fahr”, out is “aht,” and pillow becomes “pilla.” The palette of vowel sounds is also limited. A Pittsburgher would pronounce the vowels in words like bought and yacht exactly the same—they’re uniformly reduced to the short o sound of toss. And quite often, terms are shortened lexically too. You’d call a rubber band a “gumban,” aluminum foil “tinfoil,” and a submarine sandwich a “hoagie.” I could go on and on, but suffice it to say that Pittsburghese is much more than a quaint drawl or a small collection of regional colloquialisms. It’s really a distinct dialect of English.

Although it’s informally called “Pittsburghese,” this dialect, or variations of it, are used throughout western Pennsylvania. It’s hard to say at what point one has gotten far enough away from Pittsburgh that the dialect sounds strange, but without question New York is such a place. I attended a college in New York that happened to have a large number of students from western Pennsylvania. These students were not, on the whole, any more or less intelligent or good-looking than anyone else, but they were all easily identified by their dialect, and were good-naturedly teased because of it. But all through my childhood and adolescence I had tried deliberately to avoid Pittsburghese, so my provenance was not easy to guess. Once a fellow student asked me where I was from, and when I said “Pittsburgh,” he replied, “I never would have known!” I took that as a tremendous compliment.

Several years later, having finished my master’s degree in Linguistics, I was convinced that I was speaking an entirely neutral, dialect-free version of English. In the early 1990s, I was doing desktop publishing for a company in Dallas. One day I was in the editorial office and I noticed that it was quite cluttered. I said to one of the editors, “This room really needs cleaned.” The editor furrowed her brow and said, “You’re from Pittsburgh, aren’t you?” I was aghast. I knew I hadn’t said “redd up”—so what was the problem? I really had no idea what had given me away. She said, “People in the rest of the country would say, ‘This room needs cleaning,’ not ‘This room needs cleaned.'” I shook my head and sighed. Apparently, despite my best efforts, I had missed a thing or two, and Pittsburghese had not lost its ahrn grip on me.

Still, when someone asks me to speak an entire sentence in Pittsburghese, I can’t do it. I know the individual words, but I’ve lost touch with the overall accent, cadence, and intonation. I’d need a lot of practice to sound convincing. When I hear a genuine Pittsburgh accent (or, better yet, an imitation by a reformed local), I can’t stop laughing. It’s not that I think it’s silly, it’s more that it reminds me of the difference between what sounded right to me as a child and what I’m used to now.

Three Rivers Run Through It

One of the things I find most interesting about Pittsburghese, though, is how little it’s known outside western Pennsylvania. Go anywhere in the United States, and someone will be able to pick out—if not imitate—an accent from Texas, Georgia, Minnesota, or New York. But for the most part, the only people familiar with the Pittsburgh accent are those who have lived there. This is especially noticeable in films set in Pittsburgh—they may look correct, but often they don’t sound correct. A notable exception is the Bruce Willis film Striking Distance, in which the actors actually do a respectable job of sounding like they’re from Pittsburgh.

One thing I’ll say about Pittsburghese is that it sticks to you like coal dust. Well, probably a lot better than coal dust, in fact—it doesn’t wash off. To this day, I keep finding minor remnants in my own speech. Now and then I catch myself rounding my L’s or leaving off final consonants. And for years, my wife has made fun of the way I pronounce “umbrella”—with the emphasis on the first syllable. I never knew that was unusual before she pointed it out, and I didn’t know until I saw it listed on a website that it’s actually a Pittsburghese peculiarity. Time for another shahr.

Note: This is an updated version of an article that originally appeared on Interesting Thing of the Day on May 2, 2003, and again in a slightly revised form on September 14, 2004.