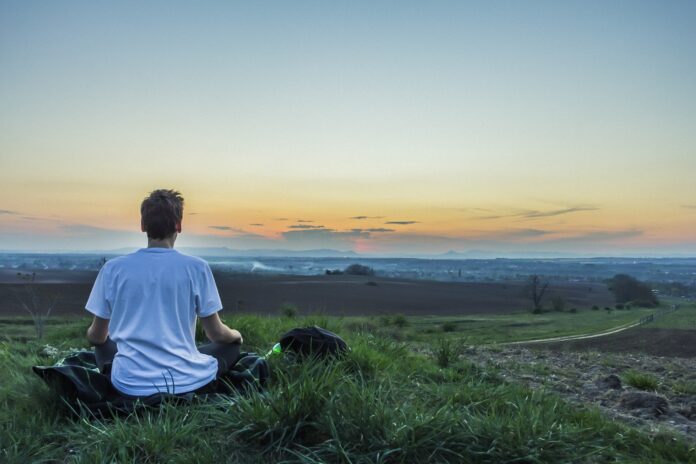 In The Hitchhiker’s Guide to the Galaxy by Douglas Adams, one of the main characters is an alien named Ford Prefect from a planet near Betelgeuse. Although he looks, talks, and acts more or less human, there are many things about earthlings that puzzle him, such as the fact that they seem to talk all the time—even if only to repeat the obvious. Over the course of several months, he comes up with a number of theories for this behavior, one of which I found particularly insightful: “If human beings don’t keep exercising their lips, he thought, their brains start working” (p. 49). I’ve frequently noticed, on the one hand, that many people like to surround themselves with sound all the time (making their own if all else fails); and on the other hand, that contemplation is a foreign and uncomfortable concept to most of us. An increasingly popular way of overcoming the sound habit, at least briefly, is to go on a silent retreat.

All Action and No Talk

The idea of a silent retreat is simple: you go somewhere relatively quiet and don’t talk—for a day, a few days, or even longer. Silent retreats usually involve a group of people, so the significant part is not so much that you yourself aren’t speaking but that others aren’t speaking to you. In addition, most other artificial sounds—radio, TV, music, and so on—are avoided, so that for the most part, participants don’t hear any words for long periods of time.

What exactly is the point of going without words for a few days? You get to hear yourself think. Other people use different language to describe this: meditation, listening to your inner or higher self, hearing the voice of God, and so on. However you wish to think about it, you are avoiding the influences of other voices in order to focus your attention inward. Just as you might step away from a crowd to have a private conversation, a silent retreat provides an extended period of time during which your thoughts can be strictly your own. Silent retreats recall the monastic tradition of vows of silence, which are still practiced today in many contemplative orders; and even some orders that don’t take vows of silence per se, such as the Carthusian monks of The Grande Chartreuse monastery in France, nevertheless remain silent most of the time. In that context, a period of avoiding speech—which for some monks can last months, years, or even a lifetime—is a sign of humility as well as being an aid to prayer and meditation. Some people participate in silent retreats as a religious exercise or because they have a specific problem to solve or decision to make; for others, it’s more of a relaxing vacation, with no real goal attached. But it’s not uncommon for people to begin a retreat without any particular expectations and later find they’ve had a profoundly moving experience.

There are no fixed rules for the way a silent retreat should be structured. Often a group will schedule one or two daily sessions during a retreat with a lecture, group prayer, discussion, or some other ritual, temporarily interrupting the silence to give participants some context or direction for their contemplation. It is also not uncommon to have individual coaches, counselors, or spiritual directors meet with participants occasionally to provide feedback or make suggestions as to where attention might be focused. Even without words, though, silent retreats can have an agenda or theme. In addition to Buddhist meditation and retreats organized by various churches, I’ve seen advertisements for silent yoga and t’ai chi retreats, for example. Retreat centers sometimes offer do-it-yourself personal retreats as well, with or without the services of a counselor.

If you look at the comments made by ordinary people who have been on silent retreats, it’s striking how often they say it was a mind-blowing or life-changing event. That the simple act of going without words can affect someone so profoundly shows how unusual silence has become in ordinary life. Even for those who make an effort to avoid extraneous noise, a silent retreat can provide a more thorough and prolonged period of silence. I participated in a silent retreat myself some years ago, and found it quite effective in helping me to clear my mind, organize my thoughts, and make sane decisions. I look forward to my next opportunity for an extended time of silence, and heartily recommend the experience to anyone who likes to think.

Tip: If you’re interested in participating in a silent retreat, you might check with a local church, monastery, or meditation center to see if they organize such events. Alternatively, organize your own or go to a rural retreat center that’s set up for individual participants.

Note: This is an updated version of an article that originally appeared on Interesting Thing of the Day on June 22, 2003, and again in a slightly revised form on July 4, 2004.