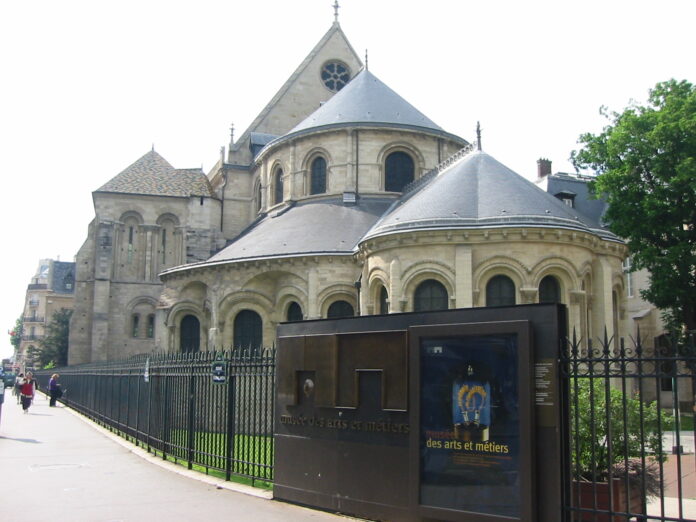 Every time I think about going to a museum, it seems like a fascinating and engaging way to spend an afternoon, but once I get there, I almost always find myself getting extremely sleepy by the time I get to the second or third gallery. My state of alertness at museums doesn’t have any apparent correlation to the amount of sleep or coffee I’ve had recently; I think it’s some strange psychological reaction to environment. After a while, all those little plaques seem to say the same thing: “This is an object created by a person in the past.” I want to be enthusiastic…I try to be enthusiastic…but usually I’m no match for the long halls of display cases.

There is an exception to this rule, though: science museums. I love inventions and gadgets, learning about how things work and how people went about solving very difficult problems. I can stay awake in a good science museum indefinitely. So while in Paris, I made several visits to the holy grail of invention lovers: the Conservatoire des Arts et Métiers (the Conservatory of Arts and Trades). Part of this centuries-old institution is a museum that’s open to the public (the Musée des Arts et Métiers), and it contains a fascinating variety of objects and exhibits, which included the original Foucault’s Pendulum until it was irreparably damaged after the cable snapped in 2010.

The Conservatoire is off the beaten path; most English guidebooks don’t even mention it. It does, however, attract a certain number of pilgrims who were fascinated by Umberto Eco’s novel Foucault’s Pendulum, part of which takes place there. Damage to the pendulum aside, the museum underwent a massive renovation after the book was written, so it’s no longer possible to retrace the steps of the characters. But one hall in particular still looks familiar: a large room that was once the sanctuary of an abbey. A replica of the Pendulum still hangs from the apex of the nave, and nearby stand old cars, airplanes, and a model of the Statue of Liberty. In the novel, a secret passage under the floor of the nave connects with the Paris sewers. That isn’t the case in reality, but truth is perhaps more interesting than fiction. There is something under the floor of the nave, a curious part of the building’s long and strange history.

The foundation for the abbey church of Saint-Martin-des-Champs (St. Martin of the Fields) was laid around 1059, about the time of the Norman conquest. The church was dedicated in 1067. In 1079 Philippe I gave control of the church to Hugues, abbey of Cluny, who then transformed it into a priory—its first prior a man named Ourson. Over the next seven centuries, numerous additions and renovations were undertaken; the current nave dates from the 13th century. All the while, though, the building remained a monastic home for the monks of Cluny.

All that changed in the French Revolution. A great many of the monks fought zealously on the losing side and were beheaded for their troubles. In 1794, abbot Henri Gregoire submitted a proposal to the National Convention: “There will be formed in Paris, under the name Conservatoire des Arts et Métiers, […], a depository for machines, models, tools, drawings, descriptions and books in all the areas of the arts and trades.” The now-deserted priory of Saint-Martin-des-Champs was designated as the home for this new collection, which began to form almost immediately. The Conservatoire officially opened in 1802. In addition to collecting inventions the way a library collects books, the Conservatoire became a respected educational institution, holding classes and seminars in a wide variety of industrial trades.

The museum closed for a much-needed renovation in 1993, and as part of the process, archeological excavations were undertaken beneath the floor of the nave. For the entire history of the church, there had been rumors that the site on which it stood was once a Merovingian funerary basilica, but this had never been proven. What archeologists discovered was a large necropolis dating from the 6th or 7th century but apparently rebuilt during the Carolingian era (8th and 9th centuries). Inside were about 100 plaster coffins, some of which had been reused for new occupants as late as the middle ages. The rumors were indeed true.

Everything Old is New Again

When the museum reopened a few years later, it was as shiny and up-to-date as any modern science museum of the time—or at least, any modern science museum housed in an 800-year-old building. Almost every museum has many more articles in its collection than can be displayed at any one time, but the Musée des Arts et Métiers decided that their thousands of additional articles should be made available to scholars even when they’re not on exhibit. So they opened a satellite facility in the nearby town of Saint-Denis, where qualified researchers can go—by appointment only—to examine the rest of the museum’s collection.

As a science museum—even with most of the explanatory text only in French—I found the Conservatoire a sheer delight each of the times I visited. The former abbey is only a portion of the museum, and the museum is only a portion of the Conservatoire. But all the history of the building and the institution seems to be concentrated in the large nave with its bones beneath and gadgets above. The odd juxtaposition of centuries of monastic simplicity with centuries of technological progress tickles me in a way I can’t easily describe. Perhaps the Pendulum says it best: as a scientific wonder that’s also meditatively simple, it symbolically bridges the illusory divide between technology and spirituality.

Note: This is an updated version of an article that originally appeared on Interesting Thing of the Day on July 14, 2003, and again in a slightly revised form on August 2, 2004.