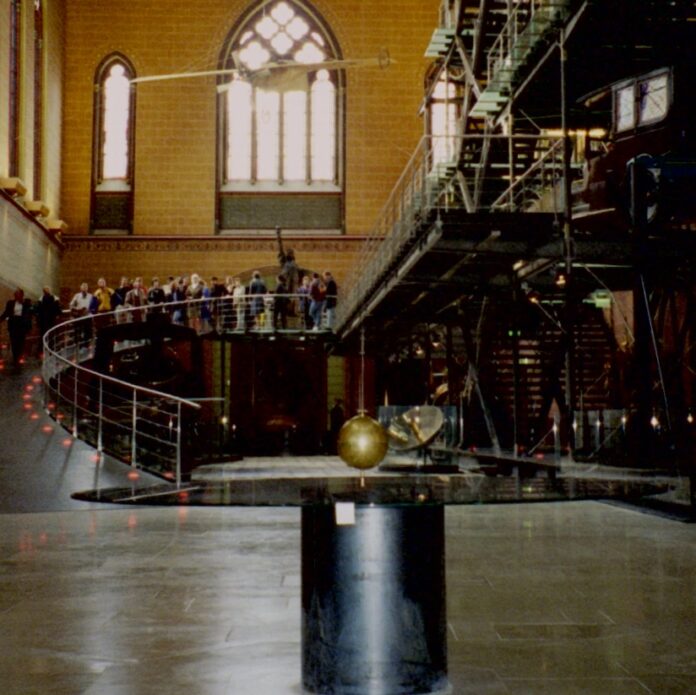 Science museums are among my favorite places to visit. In probably a dozen or so museums in several different countries I’ve seen an exhibit called “Foucault’s Pendulum,” in which a heavy weight, suspended from the ceiling by a wire, very slowly changes direction over the course of a day, knocking over a small peg every hour or so or tracing patterns in sand. I was vaguely aware that this was supposed to have something to do with the rotation of the planet, but I never really understood what that was. And to be perfectly honest, I always thought that watching a pendulum swing for an hour so was about as exciting as watching wheat grow.

Then, in the early 1990s, I read Umberto Eco’s novel Foucault’s Pendulum. The novel has little to do with the pendulum as such, but some of the characters muse over its philosophical implications, and the climax of the story takes place at the site where the original pendulum is now hanging—the Conservatoire des Arts et Métiers (Conservatory of Arts and Trades) in Paris. Eco’s story piqued my interest, and on my very first trip to Paris I decided to visit the Conservatoire and look a little more deeply into the science and history of the real Foucault’s Pendulum.

Getting Into the Swing

Jean Bernard Léon Foucault was born in Paris in 1819. He had planned to study medicine, but eventually realized he was too squeamish to deal with blood, so he turned his attention to less organic branches of science. In the mid-19th century—and for that matter, for most of history up until fairly recently—scientists did not confine themselves to a single, narrow specialty. Foucault was no exception in this regard; although he spent most of his career studying optics and astronomy, he was also responsible for major discoveries in chemistry, electricity, and magnetism. But the invention for which Foucault is best known is his pendulum.

In 1848, Foucault noticed something extremely surprising about a swinging pendulum. Even if you turn the point from which it is swinging, the pendulum continues to swing in the same direction. You can try this experiment yourself with a yo-yo (or, say, a computer mouse—as long as it’s not wireless). Tie the string or cable around a finger, hold your finger out at arm’s length pointing at some handy spot in the room, and set the weight swinging in a straight line. Now take a step or two in an arc so that your finger points at something else, and notice that the weight’s swing hasn’t changed direction, even though the point from which it was suspended has turned. Foucault thought this curious behavior of pendulums—their refusal to be bothered by the position of their point of suspension—might be used to make a stunning visual proof of Earth’s rotation.

The Pendulum and the Planet

By Foucault’s time, the rotation of the Earth was no longer in dispute, but there was still no direct way to demonstrate or measure it. Foucault reasoned that if he hung a pendulum from a fixed point and the direction of the pendulum’s swing appeared to change, that could only be because the Earth itself was moving underneath the pendulum. Over the course of a 24-hour day, if his theory was correct, a pendulum should trace out a complete circle—at least, it would if it were located at the north or south pole; at the latitude of Paris the offset would amount to a circle every 32 hours or so. (At the equator, incidentally, this experiment would not work at all.)

There was a complication, though. Because of the effects of air resistance, gravity, and friction, a swinging pendulum will eventually come to a stop, and in order to demonstrate the rotation of the Earth, it needed to swing for a significant period of time—at least an hour or two. To increase the inertia of a pendulum, and therefore the amount of time it will swing without stopping, you can increase either the length of the wire, the mass of the ball at the end, or both. So Foucault hung an 11-lb. (5kg) ball at the end of a 6-foot (2m) wire in his basement, and sure enough, before it stopped swinging the angle had rotated slightly clockwise.

Foucault then repeated the experiment with a much longer, 36-foot (11m) wire in the Paris Observatory, and the effect was again just as he had predicted. In 1851, he constructed an even grander, 220-foot (67m) pendulum in the Panthéon in Paris, and held the first public demonstrations, promising the crowds they would “see the Earth go round.” As promised, the giant pendulum made a slow but predictable clockwise motion. Later, Foucault tried the same test with a spinning (rather than swinging) weight. It worked, and this led to his invention of the gyroscope.

There is, however, even more to Foucault’s pendulum than the brilliant proof of the Earth’s rotation. The experiment works because the pendulum is hanging from a fixed point. Or is it? If you think about it, the building from which the pendulum is suspended is moving along with the Earth, which is in turn rotating around the Sun. The Sun, too, along with the rest of the solar system, rotates around the center of the galaxy, and so on. So it’s really not correct to think of the bracket on the ceiling as being a fixed point. And yet, curiously, it’s not just movement of the attachment point that the pendulum ignores—it ignores the movement of the planet and even the galaxy. The swing of the pendulum remains aligned with, apparently, the universe itself—or, to make it more comprehensible, think of it as being aligned with some very distant star. So the pendulum acts as if it’s hanging from some absolutely fixed location deep in the center of the universe. Whether this is simply an illusion or a deeply meaningful metaphysical discovery is still a matter of some debate among the few scientists and philosophers who worry about that sort of thing.

The pendulum Foucault originally used in 1851 at the Panthéon was moved in 1855 to the Conservatoire des Arts et Métiers in Paris. The Conservatoire includes a public museum, part of which is housed in a building that was once a church. The pendulum was hung from the ceiling of the choir, and became the museum’s star attraction. For several years during the 1990s when the museum was undergoing renovations, the pendulum was temporarily exhibited at its original home in the Panthéon, but was returned before the museum reopened in 2000; a replica has hung in the Panthéon ever since. Tragically, in 2010, the original pendulum in the Musée des Arts et Métiers was badly damaged when its cable snapped. So although the dented original sphere is still on display there, it’s not the one swinging from the ceiling—that, too, is a replica.

In order to show the movement of a pendulum over longer periods of time than inertia will provide—and to satisfy museum-going crowds—most modern exhibits of Foucault’s Pendulum, including the one in the Conservatoire, use an electromagnet under the floor or platform beneath the pendulum to give it a tiny extra boost as it swings past. When I first heard about the magnets, it sounded like cheating to me—the image I had in mind was of moving magnets that influenced the direction of the swing. But in fact the magnets are circular and simply pull the pendulum very slightly toward its vertical center just as it approaches the middle of each swing, so the direction of the swing is unaffected. That in itself, I think, is a very clever piece of engineering.

Note: This is an updated version of an article that originally appeared on Interesting Thing of the Day on June 12, 2003, and again in a slightly revised form on November 8, 2004.