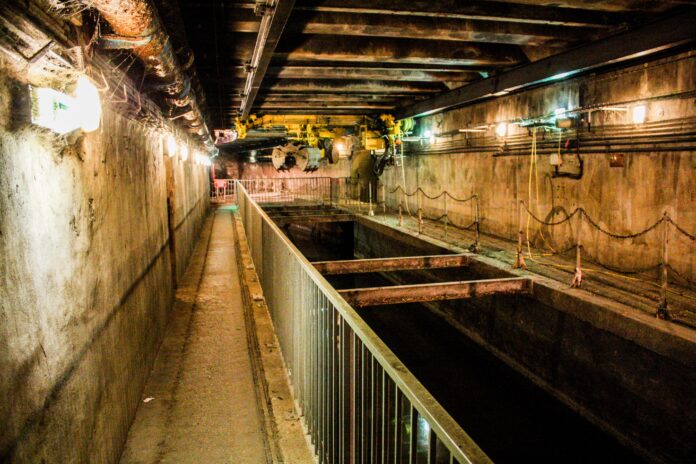 Image credit: By Shadowgate from Novara, ITALY (Egouts) [CC BY 2.0], via Wikimedia Commons

Ah, Paris. It’s one of my very favorite places, not least because its ITSKI (Interesting Things per Square Kilometer Index) is off the scale. There are, of course, the major tourist attractions such as the Eiffel Tower, the Louvre, and Notre Dame, as well as thousands of cafés, shops, and bakeries that tantalize and inspire. There are also a great many lesser-known places of historical interest, including one of my favorite places to bring guests when I was living in Paris: the sewer system. OK, the aroma wasn’t quite as pleasing as that of a fresh baguette, but the Paris sewer system—part of which has been turned into a museum that’s open to the public—is vast, intricate, and surprising in many ways. You may think of a sewer as nothing more than a conduit for waste, but in Paris, there’s more to the sewers than meets the nose.

The tunnels that make up the Paris sewer system are mostly quite large—almost the size of a subway tunnel. In most cases a central channel, wide enough and deep enough for a boat, carries waste and runoff water; on both sides are broad, paved walkways with enough headroom for most people to walk comfortably. Overhead are pipes that supply the city’s fresh water, telecommunications cables, and pneumatic tubes, among other things. But it’s the length and complexity of the tunnels that make them so intriguing: they almost exactly follow the layout of the streets above—in fact, every corner within the sewers has a street sign on it that mirrors the one on the surface. Where a wide boulevard runs on the surface, a wide sewer tunnel (or two) runs beneath; smaller streets have smaller sewers, and even side streets and alleys are duplicated underground. In all, there are about 1,300 miles (2,100km) of sewer tunnels underneath Paris.

Up through the Middle Ages, Paris had a rudimentary water-supply-and-waste-disposal system: the Seine River. Water was drawn from the river and waste deposited there, but the population of the city was still small enough that the river could purify the waste biologically. However, waste on its way to the river was a problem even then—it flowed through open sewers and gutters on nearly every street. The odor became, in many places, unbearable—but there was a worse problem: disease. The unsanitary conditions in the city were indirectly responsible for the plague, which wiped out a huge percentage of the population in 1348–1349.

Precursors of the current sewage system date back as far as 1200, when the streets were first paved; a drainage channel down the middle reduced pedestrians’ exposure to wastes. In 1370, Hugues Aubriot built a 300-meter stone-walled sewer under rue Montmartre, and in the late 1600s Louis XIV undertook additional sewer construction in certain areas. In the early 1800s, Napoleon ordered the construction of a network of sewer tunnels totaling 19 miles (30km.) But as the population of the city continued to swell, the primitive sewage systems could not keep up with it, and the Seine—still used for both intake and disposal—became absurdly polluted. A major outbreak of cholera in 1832 finally galvanized the city to find and implement a lasting solution to the problem.

In 1850 an engineer named Eugène Belgrand was hired to design a complete system for water supply and waste removal. The result was the current design, which by 1878 had reached a length of 373 miles (600km). In 1894, a law was enacted that required all waste to be sent to the sewers; the local saying at the time was that the city was completing its long transition from “tout à la rue” (all in the street) to “tout à l’égout” (all in the sewer). The sewer system was hailed as a technological marvel, a brilliant achievement that helped to usher Paris into the modern age.

Paris sewers have been a tourist attraction since 1867, when the first public tours were offered. From 1892 to 1920, visitors rode through the sewers in a locomotive-drawn wagon. In 1920 the wagon was replaced with a boat, which floated tourists along until 1975. Today’s sewer tour consists of a very small portion of the sewers which has been turned into a museum. In order to read all the signs describing the timeline of sewer construction, visitors have to stand on a metal grating over an active sewer channel; this arrangement serves to keep traffic moving at a lively pace. Exhibits also show the machinery and techniques used to dredge the sand and solid waste from the channels and the computerized monitoring system, and of course restrooms are conveniently provided at the end so visitors can try out the system personally.

The Stuff of Legend

Apart from their relatively mundane primary function, the sewers of Paris have provided fertile material for a number of writers over the years. Victor Hugo spent about 50 pages of Les Misérables describing the sewers based on information he received from his friend Emmanuel Bruneseau. Bruneseau was the sewer inspector Napoleon commissioned to explore the tunnels and create an exhaustive map of the sewers as they existed in the early 1800s—until that time, the sewers had been assembled bit by bit, without a plan or written record, and were widely regarded as a mysterious and dangerous maze. Indeed, Bruneseau found a number of interesting artifacts during his explorations, ranging from lost jewels to the skeleton of an orangutan that had escaped from a zoo several years previously. Thus Hugo’s description of Jean Valjean’s adventures in the sewers, through which he carried Marius after he had been wounded, was based on factual information and is still considered historically significant. The sewers also play a role in Phantom of the Opera, in Umberto Eco’s novel Foucault’s Pendulum, and of course in Ratatouille.

Along with the sewers, Paris has a great many other underground passages, including an immense subway system, catacombs, and the crypts near Notre Dame. Although ordinary citizens do not normally have access to the sewers and most of the other tunnels, it is hard not to believe that they are used for, shall we say, secondary purposes from time to time. Imagining great escapes, secret meetings, and the occasional vampire makes a visit to the Paris sewers all the more fascinating.

Note: This is an updated version of an article that originally appeared on Interesting Thing of the Day on June 4, 2003, and again in a slightly revised form on January 17, 2005.