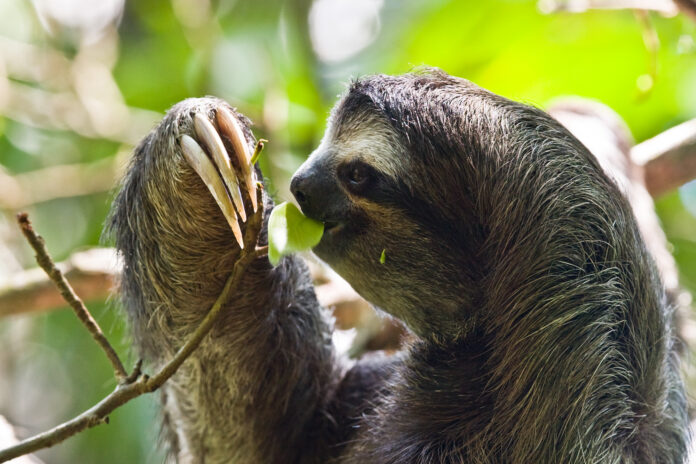 There have been times—quite a few of them, for better or worse—when I was confronted with evidence that something I’d believed (or assumed) to be the case for years was simply wrong. These occasions can be a source of embarrassment, such as the time a few years ago when a friend pointed out to me that I always misspelled the word “embarrassed.” Because I take the use of language seriously, this came as quite a blow to me. Most of the time, however, I greet epiphanies of mistaken assumptions with equanimity, if not pleasure. I love to learn, and most learning requires a certain amount of unlearning.

I had several such experiences in rapid succession while visiting a wildlife sanctuary in Costa Rica. Aviarios del Caribe, located near Cahuita on the Caribbean coast, is a sloth rehabilitation center. Sloths that are injured or orphaned are brought there and cared for, and then—if they’re able to fend for themselves—released back into the rain forest. A volunteer had patiently explained many of the differences between two-toed and three-toed sloths, about which more later. But as I was watching a baby two-toed sloth, I noticed with some puzzlement that it actually had three toes on each foot. Clearly there was an interesting story here, but that was just the beginning of the strange and wonderful things I was to discover about sloths.

First, let’s talk about those toes. Sloth expert Judy Arroyo explained to me that all sloths actually have three “toes”—that is, three digits on their hind limbs, if you want to think of them as feet. The difference is in the “fingers”—the digits on the fore limbs. Two-toed sloths have two; three-toed sloths have three. So why weren’t they called “two-fingered” and “three-fingered”? Apparently it was a problem of translation. According to Arroyo, the Spanish word used to describe the sloths’ digits can mean either finger or toe, and the English word choice turned out to be a bit misleading.

Whether you call them fingers or toes, sloths use them to great advantage. They’re hooked and very strong, which makes them handy for climbing or—more frequently—hanging upside-down for extended periods of time high in the trees. Sloths sleep up to 18 hours per day, and when awake, spend most of their time munching on leaves. They move (very slowly, of course) from tree to tree every day or two, and descend to the ground only about once a week to urinate and defecate.

Two-toed and three-toed sloths share many traits in common, but I was surprised to discover how many differences there were. The two-toed sloth (Choloepus hoffmani) has light brown fur and is nocturnal. The three-toed sloth (Bradypus variegatus) has, as its name suggests, variegated fur. It’s active during the day, so it’s the one you’re most likely to see on a rain forest hike. Males have distinctive markings on their backs that identify them uniquely, in much the same way as fingerprints. And the extra bones in the three-toed sloth’s neck enable it to turn its head almost 360°.

The Value of a Green Back

What I find most interesting about the three-toed sloth is the symbiotic relationship it has with other organisms. One effect of the sloth’s languid pace of life is that it can’t be bothered to groom itself. This turns out to be beneficial to several varieties of algae and mold that grow inside the sloth’s hollow hairs. The algae effectively turn the sloth green, giving it excellent camouflage among the leaves. The camouflage is crucial to the sloth’s survival, because its inability to move quickly makes it an easy target for the harpy eagle.

But the symbiosis doesn’t end there. The algae in the sloth’s fur provides food for a great many insects. (I should point out, incidentally, that sloths have extremely long fur, making them appear much larger than they really are.) Beetles have been found by the hundreds living on a single sloth. Another insect that calls the sloth home is a type of moth—Bradipodicola hahneli (or “sloth moth” to most people). The sloth’s fur provides both food and protection for the moth. Not only does it feed on the algae, but it also deposits its eggs in the sloth’s droppings, where they pupate and hatch, and then fly off to look for another sloth to live on.

For a Good Time, Call

Sloths are not known as particularly social creatures, but they do spend enough time with the opposite sex to reproduce. One of the studies underway at Aviarios del Caribe when I was there involved the mating habits of three-toed sloths. We saw a video in which a female sloth named Buttercup let out a blood-curdling mating call that sounded like a woman shrieking. Immediately, males from as far away as 700 meters began rushing toward the sound. By “rushing,” I mean crawling at the breakneck speed of about 200 meters per day. But for a sloth, this single-minded, deliberate movement—on the ground, no less, in plain view of predators—is definitely rushing. Ah, the things we do for love.

Females usually give birth once a year, and with gestation periods of about six months, that means they spend about half their adult lives pregnant. When a sloth reaches six months of age, it’s old enough to be left on its own. Before that time, however, if a youngster falls from a tree, the mother will not attempt to rescue it; the risk of attack by a bird or jaguar is too great.

Young sloths separated from their mothers in this way are the main wards of the sloth rehabilitation center I visited. Other residents were injured by contact with an electrical line, or orphaned when an eagle attacked the mother. Staff members and volunteers nurse the sloths back to health, and participate in a variety of scientific studies and conservation projects. Buttercup was the center’s first resident, and has been there since the early 1990s (making her a senior citizen in sloth years). She serves as a living mascot, helping to promote awareness and research of her species.

Sloths’ slow, graceful movements have been compared to those of a t’ai chi master. I agree with that assessment—and coincidentally it was for a t’ai chi retreat that I went to Costa Rica in the first place. But sloths have also been called “ugly,” and here I must disagree. Up close, sloths are actually quite cute, and the shape of their faces gives the impression of a permanent smile. In the wild, of course, the menagerie of plants and critters growing in the fur can be off-putting, but a well-groomed sloth looks downright cuddly.

Sloths share their name with one of the so-called “deadly sins” because their slow metabolism gives them the appearance of laziness. But slow and lazy are two different things. The grace, balance, and gentleness of the sloth—not to mention its hospitality toward the other creatures that depend on it—are traits I could aspire to emulate.

Note: This is an updated version of an article that originally appeared on Interesting Thing of the Day on April 17, 2003, and again in a slightly revised form on February 2, 2004.