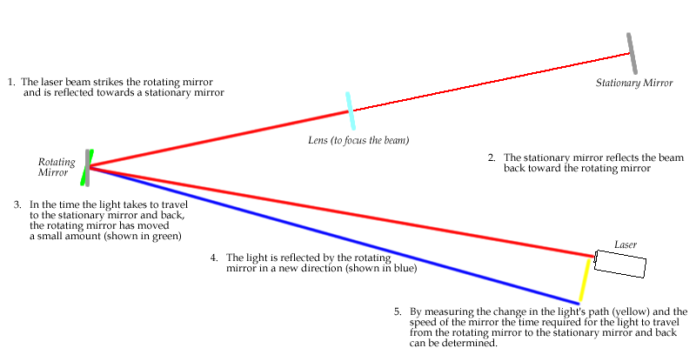 Image credit: By The original uploader was Rhodesl at English Wikipedia. (Transferred from en.wikipedia to Commons.) [Public domain], via Wikimedia Commons

The Musée des Arts et Métiers has always been one of my favorite spots in Paris. What impressed me the most on my first visit was some of the very old laboratory apparatus that enabled scientists of centuries past to figure out some very difficult puzzles without the benefit of modern gadgets such as lasers and high-speed digital computers. In particular, I spent a long time studying the equipment Jean Bernard Léon Foucault used to measure the speed of light in the mid-1800s.

Foucault worked in a variety of scientific fields, with his greatest claim to fame being a simple mechanical method for proving the rotation of the Earth—what came to be known as Foucault’s Pendulum. I was even more astounded, though, to see how he solved the extremely vexing problem of making an accurate measurement of the speed of light without so much as an electric motor or a quartz crystal. The display of his lab bench in the museum had not only a printed description but even an animated video presentation. Unfortunately, my French wasn’t good enough for me to comprehend exactly how it worked; I could only tell that it had something to do with a rotating mirror, measuring angles, and (most puzzling of all) a tuning fork. Later, reading about the equipment in English, I finally understood, and I’ll describe his method in a moment. But first, a bit of history.

From ancient times, astronomers and other thinkers wondered how fast light moved; for a long while, conventional wisdom held (reasonably enough) that it traveled instantaneously. Galileo described (and possibly performed) an experiment in which two subjects stood about a mile apart, with a third person observing them both from a distance. The first person uncovered a lantern, and as soon as his partner a mile away saw the lantern’s light, he uncovered his lantern. The third person’s job was to measure the time between when he saw the first light and the second light; Galileo then intended to use that amount of time, along with the distances between the participants, to calculate the speed of light. Unfortunately, the test was inconclusive, because the delay was too short to be measured accurately. Even Galileo admitted it was more a test of response time than a measurement of the speed of light. All he could conclude from the experiment was that light traveled at least 10 times faster than sound.

Over the following centuries, several astronomers made inferential estimates of the speed of light based on observations of the movements of planets and stars. Some of these estimates were quite shrewd, sophisticated, and (it would later turn out) fairly accurate, but they were unsatisfying because they required educated guesses about astronomical speeds and distances and could not be reproduced in a laboratory. So in the middle of the 19th century, two French scientists started investigating the problem independently, each arriving at a novel way to make the measurement with readily available equipment.

In 1849, Armand Fizeau sent a beam of light through a rotating wheel with a large number of teeth around the outside. A mirror on the other side reflected the beam each time a gap appeared in the path of the light. Fizeau realized that if the wheel rotated fast enough, the return beam would be blocked by the next tooth as it came around. So he varied the speed of the wheel until the reflected beam disappeared, performed a bit of math, and got a result of 315,000 km/second (195,732 miles/second)—certainly in the ballpark.

Meanwhile, Foucault was working on a different but equally clever technique, which he demonstrated the following year. Foucault’s method was to shine a sharply focused beam of light onto a rotating mirror, and from there onto a fixed mirror. Once the light hit the fixed mirror, it bounced back onto the rotating mirror and then back toward the source. But because the mirror was rotating, the angle at which it was positioned had changed slightly by the time the beam made its return trip. Consequently, the reflected beam did not line up precisely with the original. Foucault could easily measure the angle between the original light source and the reflected beam, and along with known constants (the distances between the various surfaces and the speed of the mirror’s rotation), it was a matter of a few straightforward calculations to convert that small angle into a representation of speed. Using this technique, Foucault produced a measurement of 298,000 km/second (185,167 miles/second), which is shockingly close to the modern measurement of 299,792 km/second (186,282 miles/second), keeping in mind that the latter figure applies only in a vacuum; light travels more slowly in air.

As for the tuning fork…Foucault used this to regulate the speed of the rotating mirror. The apparatus that turned the mirror made a sound that varied with its speed; when the sound exactly matched that of the tuning fork, Foucault knew precisely how many revolutions per second it was making.

Interestingly, in 1926 scientist Albert Michelson made a more refined version of Foucault’s apparatus. Using the best equipment available in his day, Michelson measured the speed of light at 299,796 km/second (186,285 miles/second), amazingly impressive for a mechanical measurement. Many other methods for measuring the speed of light followed, and thanks to improved optics, precision measuring devices, lasers, and digital timing equipment, scientists have arrived at a more accurate figure. But not that much more accurate, after all; Foucault did his profession proud.

On the other hand, the most delicious method—at, admittedly, the cost of some accuracy—involves using nothing more than a bar of chocolate, a microwave oven, and a ruler. You’re welcome.

Note: This is an updated version of an article that originally appeared on Interesting Thing of the Day on September 29, 2003, and again in a slightly revised form on August 22, 2004.