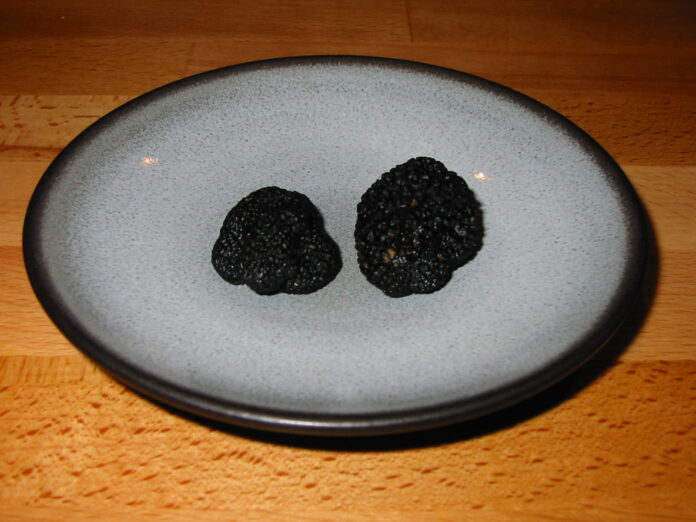 On my second trip to Paris back in 2003, I had one of the most gastronomically memorable days of my life. On a single day, I had the best baguette, the best pain au chocolat, the best cherries, and the best melon I’d ever eaten. Without in any way meaning to slight the fine work of the bakers and produce sellers who contributed to the day’s find, something about the large number of factors that had to randomly converge to produce that experience struck me as cosmically significant. I don’t think it could have been planned or manipulated; it just had to happen, and I had to be in the right place at the right time, too.

The very same thing could be said of the truffle, one of the world’s most expensive foods. I didn’t eat any truffles that day in Paris—they were long out of season. But I couldn’t help thinking that France has a strange power to alter the rules of randomness in such a way as to make exceptionally rare and tasty foods more likely to occur.

Truffles are a type of fungus, and thus a not-too-distant relative of mushrooms. There are quite a few varieties of truffle, all in the genus Tuber—the best known varieties are the black truffles found in the Périgord region of France (Tuber melanosporum) and the Italian white truffle (Tuber magnatum). They don’t look like much: small knobby lumps that resemble—if you’re being generous—shrunken brains. An average truffle will be about the size of a walnut, though some are much smaller and others gigantic, weighing a kilogram or more. They have a distinctive odor, which is sometimes referred to as “nutty” or “musky”—or, by those of a less poetic bent, “stinky.” Cut a slice from one of the hard clumps and you’ll see tiny white veins running through the otherwise solid interior. But the look and the smell are secondary to the taste, which to palates more refined than mine is considered heavenly.

That’s not to say I dislike the taste of truffles, it’s just that on the rare occasions when I’ve gotten to taste one, there was too little of it for me to form much of an opinion. Truffles are invariably served in very tiny pieces—whether in an omelette, shaved over a salad, or mixed into pâté. The main reason you’ll never see someone consume a whole truffle is that this taste sensation comes at a cost. High-quality black truffles can cost US$1,500 per pound; the even rarer white truffles can fetch $2,500 per pound and sometimes much more. No matter how much you like the taste, it’s a food to be enjoyed in moderation.

Under the Spreading Chestnut Tree

The reason truffles are so expensive is that they’re hard to find; despite many years of effort, no one has been able to cultivate them artificially. They grow under a few inches of soil on the roots of certain trees—mainly oak, but sometimes chestnut, hazelnut, and others. The only way to locate them reliably is by smell, but this requires a nose that is both sensitive and located closer to the ground than the human nose. Pigs are widely regarded as having the best nose for truffles, and are sometimes used to hunt them. The difficulty with pigs, however, is that they are passionately fond of the taste of truffles. It can be tricky—not to mention dangerous—to get between the snout of a pig and a truffle it’s trying to dig up.

Certain breeds of dogs, after a period of training, can be nearly as effective as pigs at finding truffles, but less likely to eat them (and easier to restrain if they try). Thus most modern truffle-hunters work with a canine companion. However, there’s a third common method of locating truffles that relies on a still smaller animal: the Suillia fly. This insect likes to lay its eggs above truffles, so if you can spot one flying close to the ground, it’s a good bet there are truffles nearby.

On the Trail of the Truffle

Truffles grow only in the fall and winter, and only in a very few regions where temperatures and rainfall are just right. For black truffles, the growing season runs from November to March; for white truffles, it’s generally September to early January. Although France is reputed to have the best black truffles and Italy, the best white truffles, they also grow in other parts of the world, including the west coast of North America, from northern California through British Columbia (roughly the same region where temperate rain forests are found, by yet another random coincidence).

Although it’s possible to find canned or jarred truffles out of season, truffles quickly lose their flavor after harvesting, and experts agree that it’s best to consume them within a few days after they’re removed from the ground. (Black truffles, by the way, release more aroma when heated, whereas heat destroys the flavor of white truffles. So truffle aficionados are always careful to match recipes to the available truffle varieties.) The upshot of this is that unless you live in an area near where truffles are produced, have enough money, and wait for the right time of year, you can’t have the quintessential truffle experience. Truffles enforce respect for randomness. (They also constitute a risky but potentially lucrative investment. A company called Truffle Tree grows the appropriate species of oak trees in the Gascony region of France. You can “adopt” one of these trees for a one-time cost of about US$300, plus a maintenance fee of $69 per year—and if your tree happens to produce any truffles, the company will, at your option, mail them to you or sell them and send you the profits.)

Just a Dab Behind the Ear

Truffles have long been considered an aphrodisiac, but as with all such foods, I’ve always taken that claim with a grain of salt. However, in this case there may actually be something to the claim: black truffles contain 5-alpha-androstenol, a sex hormone related to testosterone that is also found in the underarm perspiration of human males and the urine of human females. Many people believe that this very same hormone may explain the strong attraction pigs have for truffles, but experiments have shown that another chemical, dimethyl sulfide, is more likely what the pigs find interesting.

The small chocolate candies called “truffles” are so named, apparently, because of their similarity in appearance to the real thing. Considering that chocolate truffles are not rare, expensive, or subject to the whims of nature, I’m tempted to feel they didn’t come by their name honestly. On the other hand, they, too, are allegedly aphrodisiacs, and they certainly go much better with a glass of milk. Just the thing, perhaps, to pass the long months until the next fungus harvest.

Note: This is an updated version of an article that originally appeared on Interesting Thing of the Day on June 30, 2003, and again in a slightly revised form on June 2, 2004.