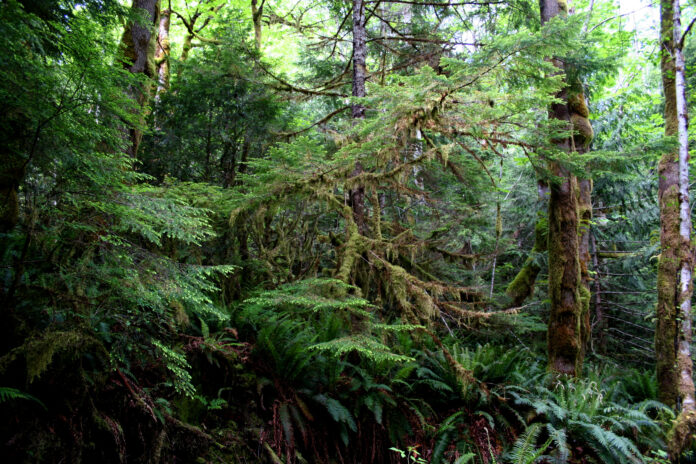 If you ask the average person to name any three countries that have rain forests, chances are their minds will jump to tropical regions—especially Central and South America, equatorial Africa, or the islands of southeast Asia. Most people would not include, say, Canada on their lists, because as everyone knows, rain forests are consistently hot places. And this is exactly what I always believed too. A couple of decades ago when I was living in Canada, my wife, Morgen, mentioned in passing, “Oh, we’ve got rain forests here.” And I thought: “Yeah, right. And deserts too. What else did Santa Claus tell you?” But it seems Mr. Kringle was right after all. Canada does indeed have rain forests—just not of the tropical variety, which was the only kind I had ever heard of. (As a matter of fact, there are also deserts in Canada…but that’s a story for another day.)

The main thing that determines whether a forest should be considered a rain forest is the amount of rainfall it receives—generally, the threshold is about 100 inches (2.5m) per year. This high moisture content—concentrated still further into fog by the leaves that form the canopy—encourages the heavy growth of plants, which in turn support animal life. When evergreen forests appear along the coast of a landmass with mountains on the other side, unusually heavy rainfall often occurs in in the forest. Voilà: rain forest. Such conditions exist in several parts of the world, including the west coast of North America (from Alaska as far south as northern California), the west coast of Chile, parts of Tasmania and New Zealand, and even a small patch of Norway.

But even if there is less diversity of animal and plant life, the sheer quantity is much greater than in a tropical rain forest—or anywhere else on Earth, for that matter. Scientists estimate that each acre (0.4 hectare) of temperate rain forest contains 500 to 2000 tons of biomass (i.e., living matter), versus an average of about 300 tons in a tropical rain forest. Most of this difference is due to the sheer size of the trees, whose average diameter is much greater than what you’d find in hotter regions.

What I find most interesting about temperate rain forests is simply that they exist—it was a bit of a shock to my system of categorizing the world to discover that rain forests are not strictly tropical phenomena. I must say, too, that temperate rain forests are much more comfortable to visit—fewer flying insects, poisonous animals, and so on, not to mention more tolerable temperatures—although you don’t get to see all the brightly colored birds, howling monkeys, and other exotic animals that are typical of the tropical rain forest.

Alas, temperate rain forests are disappearing just as quickly as their tropical counterparts—in part due to the fact that their gigantic trees make such excellent lumber. But if there is a bright side of this sort of deforestation, it is that temperate rain forests are able to regenerate much more quickly after heavy logging than a tropical rain forest could. And for North Americans, at least, they’re much handier as an ecotourist destination, which could provide another reason to keep them intact.

Note: This is an updated version of an article that originally appeared on Interesting Thing of the Day on June 29, 2003, and again in a slightly revised form on June 29, 2004.