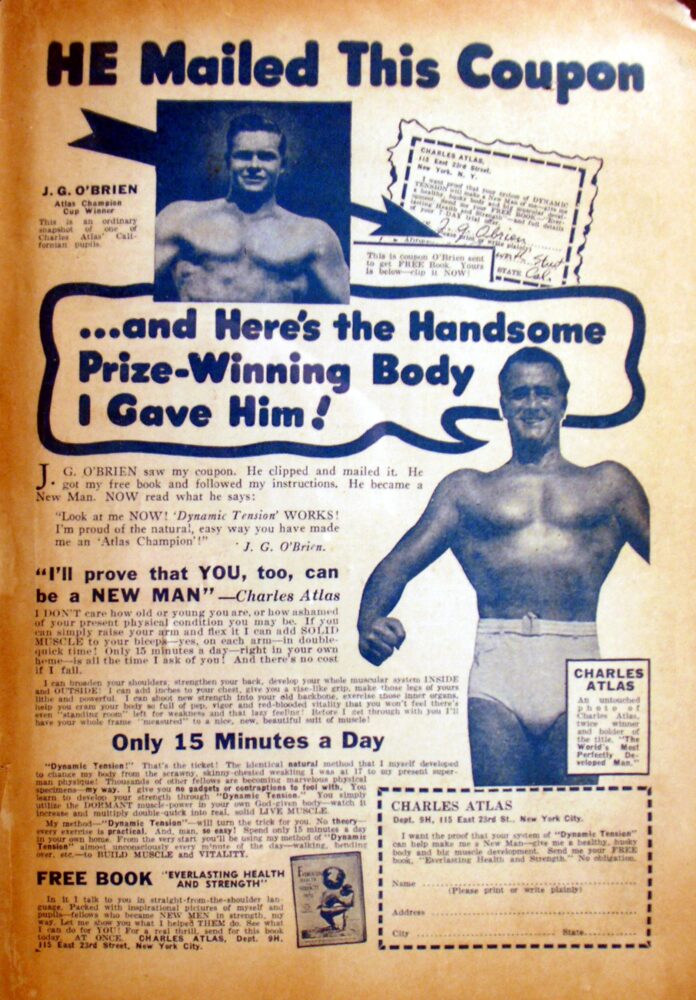 I’m not what you’d call a “fitness freak.” I’ve spent enough time in gyms to know how the machines work and experience the sensation of building up a sweat, and I practice t’ai chi regularly. I also do a fair bit of walking around my neighborhood. But working out for its own sake is not really my idea of a good time. My disenfranchisement with exercise goes way back. All throughout school, I was the kid who got picked on in phys. ed. classes—the last one chosen for teams, the slowest in races, the kid who couldn’t do a chin-up if his life depended on it. The shared trauma of phys. ed. embarrassments from high school strengthened my bond with my wife. When we were first dating, I asked her how she felt about exercise, and she replied, “My motto is: ‘no pain, no pain.'” A woman after my own heart.

A number of years ago I stumbled across an ad that made me laugh: it was one of those Charles Atlas comic-book ads from the 1930s. You know the basic idea: the skinny 97-pound weakling gets sand kicked in his face at the beach, but he can’t stand up to the bully so he loses the girl. Then he sends for Mr. Atlas’s program and one frame later, he’s admiring his new body in the mirror. He goes back to the beach, decks the bully, and gets the girl. The ad then goes on to show a photo of a smiling Charles Atlas with the caption “The World’s Most Perfectly Developed Man.” The reason I laughed at the ad was not just that it reflected a long-forgotten advertising style or that Atlas looked goofy in his leopard-skin briefs; I laughed because the ad was on a website, and after the better part of a century, the program was still being sold. Curiosity got the better of me and I sent in my US$50. (The price has since gone up slightly, to $54.95.)

What I got in the mail about two months later was a slim three-ring binder with about 60 photocopied pages inside: the 12 lessons in the original Atlas program, intended to be worked through at the rate of roughly two lessons every two weeks. These could have been exactly the same pages sent out to skinny kids 30 or 40 years ago, except for the URL and email address at the tops of the pages. For $50, I would have expected a slightly more modern and professional presentation, but I figured, I’m not just paying for exercise instructions, I’m paying for history.

Charles Atlas was born Angelo Siciliano in 1892 and immigrated to the United States from Italy in 1903. He was the kid who got sand kicked in his face at the beach. He decided to do something about it, and got the idea for his special brand of isometric exercises while watching lions stretching at a zoo. After building his own physique, he saw a statue of the Greek god Atlas at Coney Island and decided to change his name to “Atlas” to reflect his new image. Several years later, he met entrepreneur Charles Roman and the two designed the formal exercise program (and its advertising campaign). Atlas died in 1972, but his company has continued selling the instructions to this day.

And just what do the instructions say? The core of what Atlas is teaching would now be called Isometric Contraction—exercises in which you put tension on muscles without using machines or free weights. Instead, you’re relying on opposition from other muscles. Along with isometrics are some isotonic exercises (pushing or pulling on a weight, though in this case, all the weight comes from your own body, as in push-ups). None of this is rocket science: as you increase the amount of resistance, you build muscles, and as your muscles strengthen, you further increase the amount of resistance you’re able to supply. Atlas also talks about things like breathing, posture, and proper nutrition—though some of his diet recommendations are a bit suspicious by modern standards—and he has an entire lesson on avoiding constipation.

Fitness experts who have seen the Atlas program typically say it’s fine as far as it goes. Of course, there are some muscle groups it doesn’t address, and aerobic fitness is basically ignored. Arguably, the use of machines or weights could yield similar results more quickly or permit someone to advance further, but for people wanting to build muscles on a budget, it’s an entirely reasonable program.

The only real problem—and the reason my arms still don’t look like Atlas’s—is that the exercises are hard. Or, perhaps I should say, they’re no easier than any other kind of exercise. Naturally, they work only if you practice them diligently over an extended period of time.

When I first got the Atlas program in the mail, I did make an honest effort to follow the instructions—for about a week. Then I gave up, due to laziness, sore arms, and a lack of time and motivation. Every once in a while I think to myself, “I should actually go all the way through the program…just to see.” Perhaps one day I will. Of course, I never, ever wanted to have the bodybuilder physique; I just don’t find that body shape appealing. And for me, written instructions and the promise that I’ll be able to beat up a bully some day are not strong motivators; if I wanted to build serious muscles, I’d probably sign up at a gym with a personal trainer. Still, for all its anachronistic campiness, the Atlas program is really a pretty good idea—good enough to keep selling by the tens of thousands more than 80 years later.

Note: This is an updated version of an article that originally appeared on Interesting Thing of the Day on May 24, 2003, and again in a slightly revised form on August 8, 2004.