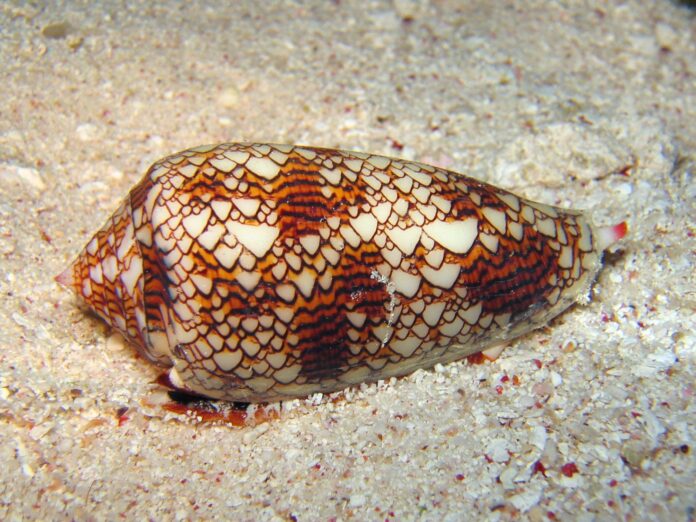 One of my kids is really into both trivia and nature, and we’re routinely subjected to recitations of unusual facts about the animal kingdom. So we were reading through one of the innumerable lists of the world’s deadliest animals. And of course we saw all the usual suspects—venomous snakes, hippos, mosquitos (you know, because malaria), box jellyfish, and so on. Animals that are widely known to be deadly for fairly obvious reasons. (Humans rank high in some of these lists too, but that’s another whole story.) But one entry on this list made me do a serious double-take: a snail.

Depending on which list you look at, the cone snail is either the fourth-and-a-half, fifth, ninth, or twenty-second deadliest animal on Earth. But anyway: super crazy deadly. And that’s not even the world’s only deadly snail. The freshwater snail also makes a bunch of the deadliest animal lists, coming in at fourth on one list, seventh on a second, and sixteenth on another.

So I’m thinking, wait, what? Seriously? Snails? Those little guys that blaze along at speeds approaching one furlong per fortnight? How are they deadly? Do people step on them after a rain storm, slip, and break their necks? Do they choke on them because they weren’t cooked with quite enough garlic and butter?

Well, no. Here’s the scoop.

The cone snail is not merely venomous; various species can produce hundreds of different venoms. A sting with the snail’s harpoon-like “teeth” can cause paralysis followed by death—sometimes within minutes—and there’s no antivenin. These lovely creatures are found in warm coastal waters, in places like the Caribbean, Hawaii, and Indonesia. Yowch.

Freshwater snails are not harmful themselves, but they carry a type of parasitic worm called a blood fluke. If a freshwater snail—or even the water it was hanging out in—comes into contact with your skin, the parasite can get into your body through the skin. It can then lay eggs inside you and cause a truly gross disease called schistosomiasis. This condition is treatable, at least, but it still kills way more people each year (think: hundreds of thousands) than the cone snail (think: single digits).

So let’s be careful out there. There may be no good way to die, but I’m pretty sure you don’t want “snail” listed in your obituary as the cause of death.