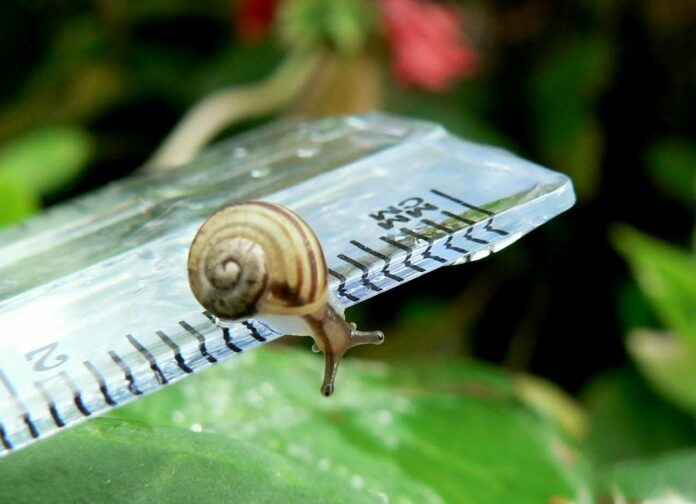 When I write articles for Interesting Thing of the Day that use measurements expressed in American or British units (pounds, gallons, miles, etc.), I always try to include S.I. (metric) units too. I do this partly because many of our readers are located in other parts of the world, and partly because metric units just make so much more sense. And yet, all units of measurement are ultimately arbitrary, and however convenient calculations may be with systems based on the number 10, there are always other ways of looking at things.

Faster than a Speeding Snail

When I was in high school, for example, I heard someone use the expression “furlongs per fortnight,” an odd juxtaposition of measurements that struck me as quite funny. I thought it would be interesting to figure out how to express the speed of light in furlongs per fortnight. It turned out to be a huge number, over 1.8 trillion (1,802,617,500,000, to be exact). A furlong is of course defined as 40 rods, a rod being an equally obscure unit of length measuring 16.5 feet. Thus you can also express a furlong as 220 yards, 660 feet, 201.2 meters, or 1/8 of a mile. (The only people who normally work with furlongs are those who design race tracks for horses—clearly, an animal whose height is measured in hands needs a special term to describe how far it runs.) A fortnight is 14 days (or nights, as the case may be). So something moving at the speed of one furlong per fortnight (f/f) would be moving very slowly indeed. Interestingly enough, though, 1 f/f is almost exactly equal to 1 centimeter per minute; therefore, furlongs per fortnight would be a good unit of measurement for a snail’s pace, which ranges from a bit less than 1 f/f to about 30.5 f/f.

Engineers like to use the term “furlongs per fortnight” when they encounter an unknown unit of measurement or can’t figure out what the best unit is to express some value. Because this term has come into common slang use in a few academic fields, it often shows up in tongue-in-cheek questions on exams in physics, math, and engineering. For example: “Determine the velocity of projectile x at time t. Express your answer in furlongs per fortnight.”

A Googol of Possibilities

“Furlongs per fortnight” also famously appears in Google’s calculation feature. If you need to do a calculation or convert one type of unit into another, you can type what you want into Google’s search box (or the Google search field in your web browser, as the case may be). Google can work with almost any conceivable unit of measurement. Here are some examples:

The possibilities are endless. And the point of all this is…well, I’ll need to think about that. Give me a few microcenturies, and I may be able to come up with one.

Note: This is an updated version of an article that originally appeared on Interesting Thing of the Day on October 1, 2003, and again in a slightly revised form on August 24, 2004.