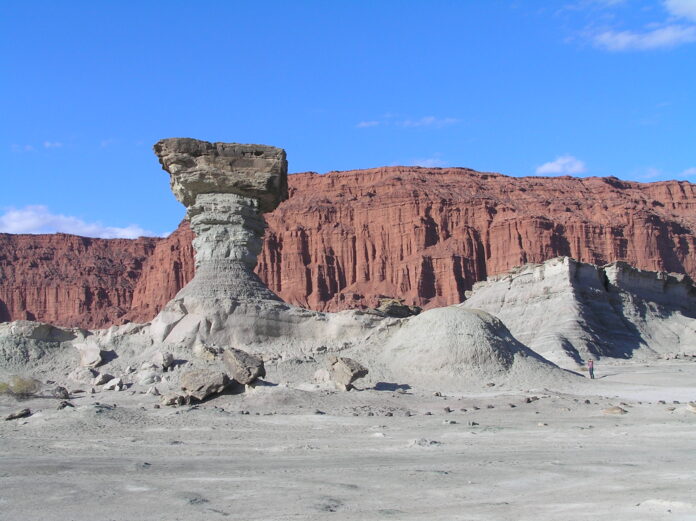 I have a special fondness for deserts and other barren landscapes. Partly, I’m sure, it’s because of their rugged natural beauty, but I also find the lack of people and the coinciding lack of noise quite refreshing. I’ve spent plenty of time in desert regions of North America, South America, and the Middle East. One spot I missed during my trip to Argentina back in 2004 would undoubtedly have made it onto my list of favorite desert places. Located in the San Juan province in northwest Argentina, Ischigualasto Provincial Park is remote, hot, amazingly dry, and generally inhospitable, but nevertheless manages to draw over 30,000 tourists each year.

The park takes its name from the Ischigualasto Formation, a large basin of sedimentary rock that was once a lush tropical swamp and is now a paleontologist’s playground. It contains a vast number of fossils, but its significance runs much deeper than that. It’s the only known place on the planet that contains a complete fossil record for the entire Triassic Period—a span of about 45 million years at the start of the Mesozoic Era, which began roughly 245 million years ago. What’s so significant about this period of time is that it’s when the first dinosaurs and the first mammals appeared. As a result, Ischigualasto is the best place to look for fossils of intermediate species.

A great many of the fossils in Ischigualasto are of plant-eating reptiles called rhynchosaurs, while many others are of cynodonts. Several websites I consulted unhelpfully explained that cynodonts are a group of therapsids, which are of course an order of synapsids. In English, cynodonts were a type of mammal-like reptile, a species that nicely illustrates evolution in progress. The word cynodont means “dog teeth,” referring to their mammal-like tooth structure. They walked on two legs, were covered with hair, and were warm-blooded—yet, like reptiles, they still laid eggs. You can also find some dinosaur fossils in Ischigualasto, and although there aren’t as many of them, they’re extremely significant because they’re among the oldest dinosaur remains in the world.

The fossils, however numerous and significant they may be, are not Ischigualasto’s biggest attraction. Tourists come to see the park’s rock formations. The Ischigualasto Formation is nicknamed “Valley of the Moon,” and although the pictures I’ve seen don’t remind me of the moon, they do certainly have an otherworldly appearance. As in Sedona, Arizona, many of the rocks and hills have a striking reddish cast, due to large concentrations of iron oxide. One rock formation, known as The Mushroom, has a broad stone cap sitting atop a much narrower column. This basic geometry, which in some cases appears to defy gravity, is typical of the formations, some of which have evocative names like The Sphinx, The Worm, and The Submarine. One particularly unusual area is a relatively flat expanse called The Ball Court, which is is covered with hundreds of natural stone spheres that evoke images of soccer balls. The park also contains petroglyphs and other artifacts of the area’s ancient human inhabitants.

Owing to its great scientific importance and its uniquely beautiful landscape, UNESCO named Ischigualasto Provincial Park, along with neighboring Talampaya National Park, a World Heritage Site in 2000. This recognition has helped to publicize the park’s existence, though the great majority of tourists come from within Argentina. Most visitors take a guided driving tour, which lasts two to four hours. People do sometimes camp in the park, but those who do are strongly urged to bring plenty of food, water, sunscreen, and shade, and to prepare for extreme temperatures (not only hot during the day but also very cold at night) and a persistent wind. Also bring your own soccer ball: kicking stone spheres puts you at an evolutionary disadvantage.

Note: This is an updated version of an article that originally appeared on Interesting Thing of the Day on July 26, 2006.