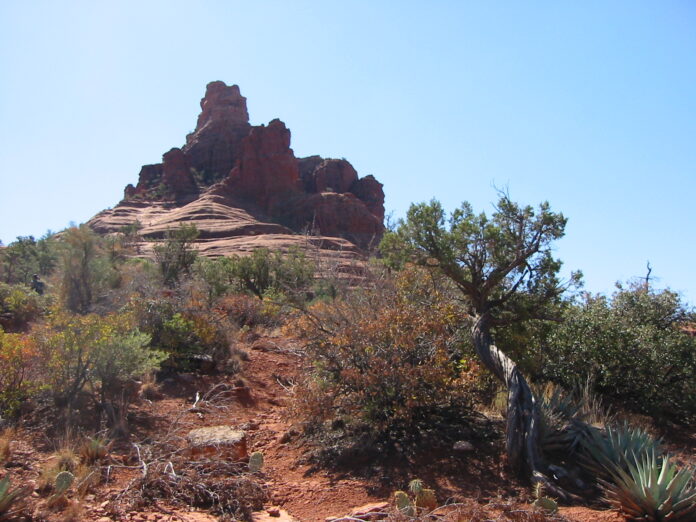 Allow me to get this disclaimer out of the way right up front: today’s interesting thing might not exist. But let’s be fair—I am not one to judge something by its ontological status alone. If it does exist, it’s very interesting indeed, and if it doesn’t, the widespread belief in its existence is equally interesting. I am referring to a natural phenomenon supposedly found in several places around Sedona, Arizona: something called an energy vortex.

The town of Sedona, about two hours’ drive north of Phoenix, is situated in an area of rare and stunning natural beauty. Towering rock formations and iron-rich reddish soil give the landscape an otherworldly appearance. This looks like what you imagined as the Old West, and countless films have been shot here. Kids will recognize it as the habitat of Road Runner and Wile E. Coyote. If you’re looking for a scenic vacation spot, Sedona is the place to go. It’s a favorite destination for romantic getaways, with a resort or a spa around every corner.

A large percentage of Sedona’s visitors, however, come to experience something you can’t see at all. An endless number of books, websites, brochures, and local guides proclaim the wonders of several so-called energy vortexes. A vortex, it is claimed, is an area of invisible, swirling energy emanating from the earth and producing an uplifting, rejuvenating sensation in visitors. Nearby, one often finds juniper trees with severely twisted trunks and branches—an effect attributed to the vortex energy. So powerful is this force, in fact, that it has twisted the laws of grammar in the entire region. What would in other parts of the English-speaking world be called “vortices” gets twisted into “vortexes” in the local parlance.

What exactly is an energy vortex? There is no convincing answer to that question, the only common thread being that they are spots of increased energy. Some people use terms such as “magnetic,” “electrical,” or “electromagnetic” to refer to this energy, but I have heard of no scientific measurements that indicate any unusual electromagnetic activity in the area. Even if there were, it’s unclear how human beings would be able to sense it directly. Others say it’s nothing of the sort, that it’s psychic energy of some kind, which explains why it can’t be measured. But the energy is nearly always described using the term “subtle,” with the promise that you will feel it “if you are a sensitive person.” In my less charitable moments, I suspect “sensitive” is meant as a euphemism for “credulous,” but you can make up your own mind.

Actual evidence for the existence of the vortexes—apart from all the footprints and cairns left by tourists—is sketchy at best. The twisted juniper trees, which are indeed quite unusual, are the only physical indication of invisible forces, and only a very few of the trees have this feature. You’ll see a twisted tree right next to a perfectly ordinary one. It seems strange that a vortex would produce such a highly localized effect, and I can imagine any number of other causes for the twisted trees.

Locals seem to be in agreement that there are four main vortexes near Sedona, though some claim there are a number of other smaller vortexes, and others describe the whole area as being effectively one giant vortex. Vortex experts (vortexperts?) go into great detail about how one vortex is more masculine, one more feminine, another balanced in its energy. Others speak of energy as moving upward or downward, depending on the vortex. Clearly there is more to the vortexes than fails to meet the eye.

Taking Vortexes for a Spin

A number of years ago, I was in Sedona to participate in a t’ai chi retreat. I scheduled some extra time in my trip so that I could visit the vortex sites and see (or feel) for myself whether there was anything to the claims. I was prepared for—even hoping for—a significant experience. I didn’t know what I was supposed to feel, but I was looking forward to finding out.

Armed with vortex maps, hiking shoes, and sunscreen, my companions and I began visiting the best-known vortexes. In each location, we hiked to the spot said to be the epicenter of vortex activity and spent some time standing or sitting quietly, trying to clear our minds, relax our bodies, and allow ourselves to experience whatever was there to be experienced. At the first two or three vortexes—reputed to be the stronger ones—I had a very distinct experience of fresh air and sunshine, of perspiration from the heat and the hike, and a sore behind from sitting on the rocks. These are all powerful sensations, of course, but not particularly unusual ones. Beyond that, I just didn’t sense anything. My companions spoke of feeling energized and refreshed, but I figured that was attributable to very ordinary causes.

Our final stop, called the Airport Vortex, was supposedly a weaker vortex. Again we hiked to the appropriate spot (thoughtfully marked with a ring of stones by earlier groups of vortex-seekers). This time I felt…weird. I don’t have a better word for it than that. There was something quite unusual about the way I felt there that just made me walk around for a long time with a puzzled look on my face, trying to put my finger on it. A little tingly, perhaps? Maybe, but that could mean anything. Happy, invigorated, clear-headed? Sure, I guess, but that wasn’t really it either. All I can tell you is that I felt an indeterminate but positive sensation there that I hadn’t felt before and didn’t feel afterward. I don’t know what it was, and I don’t know that it wasn’t my imagination. Whatever it was, it certainly was subtle, and curiously, I was the only one in the group to feel it, whereas I had been the only one not to feel anything at the other locations.

I Want to Believe

I’ll be the first to admit this is hardly a resounding proof. I’m not really the crystals-and-incense type, if you know what I mean, and I have always regarded New Age beliefs with more than a bit of skepticism. That’s not to say I don’t find them extremely interesting. As with any meme that rests on unproven claims, my inclination is to suspect there’s something real behind it, though perhaps not what people commonly believe. Maybe there really is some unmeasurable form of energy concentrated in vortexes; maybe my psychic sensitivity is too underdeveloped or my skepticism too strong for me to perceive it. Or maybe the phenomenon that has been described using “energy vortex” terminology is something entirely different but nevertheless not imaginary. This is all, of course, possible, and I’d like to believe it. I’d like to think that the next time I go to Sedona, I’ll experience more than pretty rocks and fresh air. But the effect will have to be quite pronounced to convince me it’s not just in my head.

Vortexes or not, Sedona is a marvelous place to visit. Endless miles of hiking trails, postcard-perfect photo ops at every turn, and desert tours in a hot air balloon or pink jeep make it a memorable destination. I’ll go there again, and maybe next time I’ll be more attuned to the energy and have a different experience to report. See you at the vortex.

Note: This is an updated version of an article that originally appeared on Interesting Thing of the Day on April 7, 2003, and again in a slightly revised form on September 20, 2004.