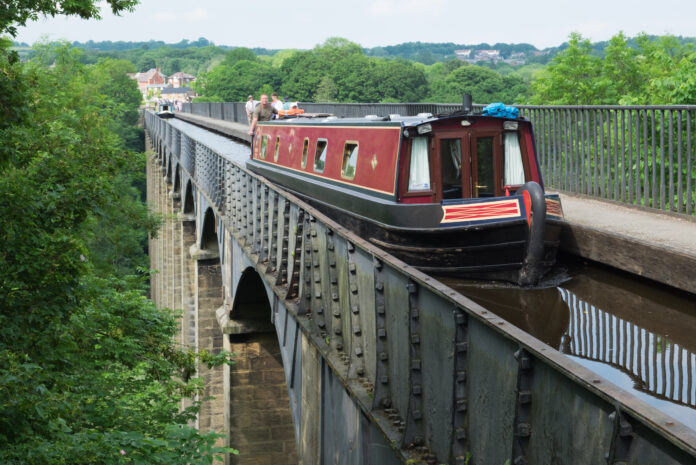 Before I knew much about aqueducts (whether ancient or modern), I imagined they would be constructed to bring water to areas that had none. While they can serve that purpose, I’ve since learned that aqueducts have been built in places with plenty of water—such as a river valley.

One example of this is a first-century aqueduct system constructed by the Romans in Southern France to carry water from the Eure spring in Uzès to a water tower in Nîmes, about thirty miles (fifty kilometers) away. In this case, it was the spring water in particular that the Romans coveted, using it to supply the fountains, sewage systems, and spas of the flourishing town. As part of the aqueduct system, the Romans built the now-famous Pont du Gard, a bridge that enabled the channel of water to cross over the Gard river and to continue on its way to Nîmes. In a way, it was like they built a river (or stream, if you will) above another river; rather remarkable to a non-engineer like me.

The Pont du Gard is remarkable for a number of other reasons, including: its longevity, having remained largely intact over the last two thousand years; its size, being the highest aqueduct ever built by the Romans (at 49 meters in height); and its incredible engineering, being composed of large stones that fit together without the use of mortar. Now it’s a UNESCO World Heritage Site, and every year large numbers of visitors from around the world come to see this amazing construction (including me in 2013—it was an awesome sight). Originally built to serve the social and business interests of Nîmes, the Pont du Gard now serves as a potent reminder of human ingenuity.

A slightly less famous and considerably younger version of the Pont du Gard can be found in Northeast Wales. The Pontcysyllte Aqueduct, built between 1795 and 1805, was created to carry the Llangollen canal over the valley of the River Dee; another river-over-a-river construction. In this case, the Llangollen canal, which connects three major rivers—the Dee, the Severn, and the Mersey—was originally part of the Ellesmere canal, a route built to connect the coalfields and ironworks of the town of Wrexham with the sea.

The creation of the Pontcysyllte Aqueduct (about which more in a moment) was one among a series of large-scale construction projects that began in the late 1700s and continued into the 1830s. These projects were sparked by the opening of the Bridgewater canal in 1761, created by the third Duke of Bridgewater (a great example of an aptonym if ever there was one) to provide an efficient means of transporting coal from his coal mines in Lancashire to the booming industrial city of Manchester. This canal, which included a large aqueduct over the River Irwell, proved so profitable to the Duke that it encouraged many others to build canals of their own.

Before the development of railroads, canals were the first means of mass transport of goods in Britain. The canal-building craze started by Bridgewater helped to fuel the so-called Industrial Revolution, which saw a change from a primarily agrarian society to one in which trade and manufacturing could be undertaken on a massive scale. The reason for the incredible success of the canal system lay in its great improvement over the traditional method of transporting goods.

While Britain had always relied upon waterways as a means of transport, being surrounded by water and possessing many large navigable rivers, those areas of the country not in proximity to a body of water could be accessed only by road. However, roads at that time were mostly built of mud, and could become impassible in bad weather. In addition, there was a limit to how much cargo could be transported by horse and cart, usually around one to two tons. In comparison, the new canals could accommodate boats carrying 30 tons, with only one horse needed to pull the load as it walked beside the boat on specially created towpaths. This dramatically increased the rate at which goods could be shipped, and brought incredible profits to the companies that operated the canals.

There were limitations to this mode of transport, though; in order to save costs, canals were often built quite narrow. This meant only specially designed “narrow boats” could navigate the canals. In addition, because canals are constructed bodies of water with no current, the speed of travel was limited to the speed of the “horsepower” involved, although this problem was less prominent in later years as steam and electric powered boats were developed.

Gradually, with the rise of the railroad, the canal system came to be less and less economically viable. Although the canals were still in commercial use well into the 20th century, their dominance was greatly overshadowed by other modes of transport. Unlike other European countries, such as France, Germany, and the Netherlands, which modernized their canal systems to accommodate larger vessels, the British system did not undergo the same kind of overhaul and fell more and more into disuse.

Fortunately, the canal system in Britain was reborn in the 1960s and ’70s when it came to be associated with holiday travel. Now these historic canals are frequently used by boaters and tour operators seeking a new form of vacation activity.

The first commercial canal built by Bridgewater was designed by James Brindley, a man with very little formal education, but who nonetheless went on to become one of the best-known engineers of the 18th Century. Following in his footsteps, Thomas Telford was only four years old when the Bridgewater canal was opened, but came to prominence after he oversaw the construction of the Pontcysyllte Aqueduct from 1795 to 1805.

The aqueduct has many notable features, including its great length (1007 feet; about 300m), its structural ingenuity (in its use of tapered support columns), and the construction of the metal trough in which the water is carried. In order to reduce the weight of the masonry pillars, they were built wider at the bottom than at the top, allowing the aqueduct to reach a great height. The masonry was held in place by a mortar made of lime, water, and ox blood. The metal trough carrying the water (and the boats) was built from cast iron sections joined together and caulked using flannel dipped in boiling sugar, and then sealed with lead.

In 2005, the Pontcysyllte Aqueduct celebrated its 200th Anniversary, and in recognition of its cultural importance, was submitted to UNESCO as a potential World Heritage Site (which it was awarded in 2009). Like the Pont du Gard, it receives many visitors and has become a significant tourist attraction. Boat rides along the aqueduct are popular, often traveling to and from the town of Llangollen, the site of the International Eisteddfod, a music festival that takes place every year in July.

As with the Pont du Gard, a purely commercial endeavor has now become something to celebrate. Although the canal system, including the Pontcysyllte Aqueduct, no longer drives the economic engine of Britain, the ingenuity of those who designed these marvels continues to amaze and inspire all who see them.

Note: This is an updated version of an article that originally appeared on Interesting Thing of the Day on June 21, 2006.