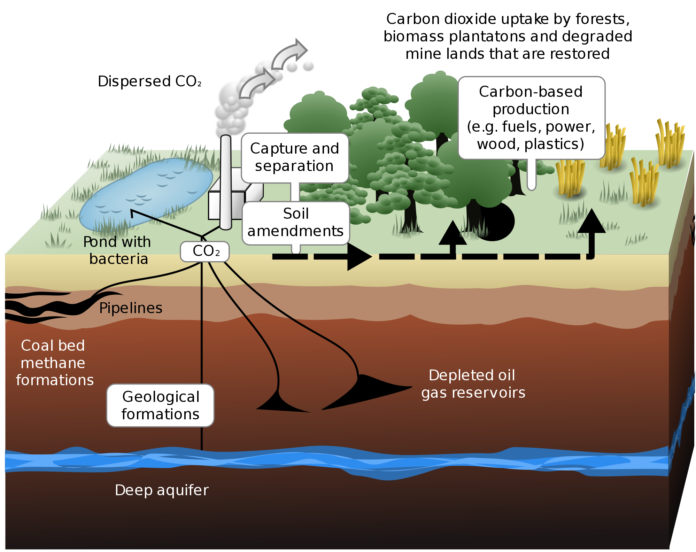 By now, everyone is well aware of the atmosphere’s rising level of carbon dioxide (CO2), as well as the fact that this is increasing the average global temperature and causing climate change. While nations and corporations debate about whether or to what extent CO2 emissions can be reduced, it’s clear that at least a portion of that unwanted CO2 can be captured and liquefied (for example, as it’s produced by power plants and factories), preventing it from going into the atmosphere. Great, but then what? There’s way too much of it to just store it in giant tanks for eternity.

The process of storing carbon dioxide permanently in such a way that it cannot escape back into the atmosphere is known as carbon sequestration (or, sometimes, carbon dioxide sequestration). You may have heard the term in the news, but what does it really mean? Broadly speaking, there are two places one might put large quantities of unwanted carbon dioxide—in the oceans or underground. Techniques for getting the CO2 to its putative final resting place (and keeping it there) are in varying stages of development.

The world’s oceans already absorb unfathomable amounts of CO2; some researchers believe they could hold a great deal more with a little help. The upper part of the ocean typically has a fairly high concentration of CO2 (absorbed directly from the atmosphere), but at greater depths, the concentration is much lower. So one way to dispose of CO2 may be to inject it into deep ocean water. At depths over 3,000 meters or so, liquid or solid CO2 is denser than the surrounding water, meaning that it could sink all the way to the ocean floor. Closer to the surface, it would dissolve into the water, which wouldn’t be great because dissolved CO2 makes the water acidic, with detrimental effects on marine life. Liquid CO2 on the ocean floor may react with minerals there and form relatively harmless solid precipitates—or it may simply kill off organisms already living there. So it’s an idea, but not a risk-free one.

Well, what about putting it in the ground? Merely burying CO2 is not good enough; in order for it to stay put, it has to be stored very deep in the ground, and somewhere that the gas cannot escape into the atmosphere. Some possibilities include:

And then, of course, there’s a natural CO2 storage apparatus: forests. Trees are incredibly effective at absorbing carbon dioxide and creating oxygen, so planting (or replanting) millions of acres of forest could go a long way toward solving the CO2 problem—no drilling or high-tech research required. This is not technically sequestration, as you wouldn’t manually inject previously collected carbon dioxide into a tree—but it does have essentially the same net effect.

Carbon sequestration is not a magic bullet—it will help, sure, but as long as we keep pumping more CO2 into the atmosphere, we’re still making the problem worse. Furthermore, although all the potential terrestrial CO2 storage spots show some promise, the safety, capacity, and long-term effectiveness of carbon sequestration is ultimately unknown. At best, it will address only a small portion of the atmospheric CO2 surplus; at worst, we may find that something we thought we buried comes back to haunt us. (If you want to be really sure carbon never escapes again, you could compress it all the way into diamonds. That’s possible, but requires too much energy to be feasible.)

Note: This is an updated version of an article that originally appeared on Interesting Thing of the Day on December 17, 2004.