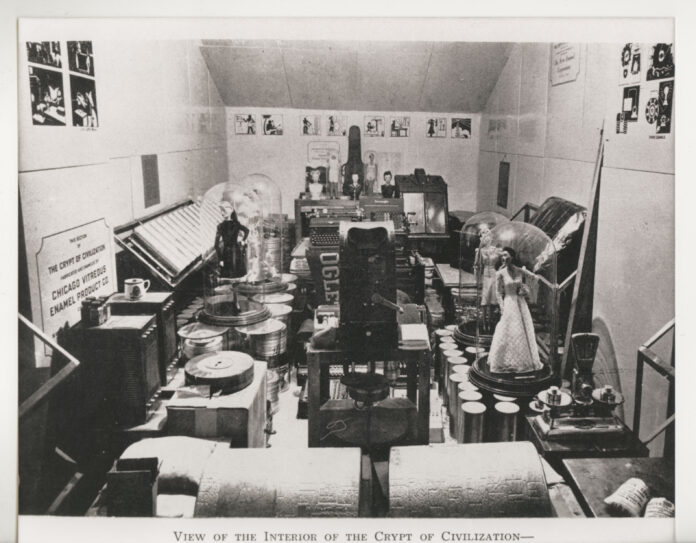 On July 4, 1976, bicentennial celebrations took place all over the United States. I was nine years old at the time, and along with my five-year-old sister, I went to a special gathering just a few doors down from our house near Pittsburgh, Pennsylvania. A local funeral parlor, in a highly publicized event, was going to bury a time capsule (instead of a coffin) in a corner of its parking lot. Memorabilia from the community would be kept there until the capsule was unearthed, as I recall, 50 years later. Children were particularly urged to come, in order to sign a replica of the Declaration of Independence that would be included in the capsule. By the time my sister and I had made our way to the front of the crowd, the page was completely full, so someone brought out extra sheets of paper to hold the rest of the signatures. I remember being both excited to have my signature in a time capsule and annoyed that I had to sign a stupid blank piece of paper.

The capsule was filled with nitrogen to preserve its contents, buried, and covered with a small monument that included a plaque explaining what was inside and when it was to be opened. On a couple of occasions since then, I’ve visited that monument, which is now pretty dingy and largely forgotten. And I’ve thought to myself: Will anyone actually remember to dig this thing up in 2026? The people who buried it will be long gone. And who knows what will have happened to that property by then? If I’m alive and I show up for the disinterment, will I have to bring my own pickaxe? And if someone does remember, will we actually learn anything interesting from those 50-year-old artifacts?

Museum for the Future

The idea of burying something to be found by future generations goes way, way back. But the modern notion of a time capsule didn’t appear until at least the 19th century, if not more recently. The first serious attempt to preserve a large collection of information and artifacts for the distant future is also, to date, the most elaborate: the Crypt of Civilization, sealed in 1940 at Oglethorpe University in Atlanta, Georgia.

The idea for the Crypt came to Oglethorpe University president Thornwell Jacobs in the 1920s, and he solidified it into a plan in 1936. Jacobs realized that the information left to us by ancient civilizations is spotty at best, and he wanted to do a favor for historians and archeologists of the future. So his idea was to collect a vast storehouse of information and objects representing all of human history to that point—including science, technology, entertainment, and every aspect of popular culture—and consolidate it into a multimedia museum, specially preserved for millennia.

While Jacobs was supervising the three-year collection process, his project got a lot of publicity, and similar (though smaller-scale) efforts began to spring up elsewhere. The Westinghouse Electric and Manufacturing Company decided to create a torpedo-shaped container of artifacts to be buried during the 1939 World’s Fair (and opened 5,000 years later). They called their container a “time capsule,” and that term was soon adopted for nearly all such projects. All except the Crypt, that is—even though it was, in a way, the prototypical time capsule, its scope was so much larger that the word “capsule” wasn’t appropriate.

In fact, the Crypt is a room that was once a swimming pool. Located on the lower level of Oglethorpe University’s Phoebe Hearst Hall, it is a chamber measuring 20 feet long by 10 feet wide by 10 feet high (6 x 3 x 3 m). Because it was originally a pool, the bottoms and sides of the chamber were already waterproof. It rests on bedrock and has a thick layer of stone above it. In other words, the room will survive nearly any catastrophe outside. It underwent extensive renovations to further reinforce and seal it; and the most delicate items inside are hermetically sealed in specially designed containers. The chamber itself can be entered only through a heavy stainless steel door that was welded shut on May 25, 1940.

The Crypt contains many hundreds of items, from the sublime to the mundane. Among the contents are copies of over 800 books of all kinds, stored on both microfilm and metal plates; audio recordings; newsreels; a radio; electric light fixtures; games and toys; a typewriter; plastic samples; and a container of beer—to name just a few. There are microfilm readers and projectors; the archivists also thoughtfully included a wind-powered generator in case electricity is not available when the Crypt is opened. And—my favorite part—the first thing one will see on entering the Crypt is a machine to teach basic English, so that the rest of the materials can be understood even if English is long dead.

If you’re thinking that sounds like the Crypt was destined to be sealed for a long, long time, you’re absolutely right. Most time capsules are intended to be opened in 50 or 100 years. The Crypt of Civilization, however, is not “scheduled” to be opened until 8113. This seemingly arbitrary date was 6,177 years from the time the Crypt was designed in 1936—which was, in turn, 6,177 years from the first date for which we have historical records (4241 BCE, when the Egyptian calendar began). Thus, the Crypt should contain a fairly good record of the first half of human history as of the date it’s opened.

Considering how much the world has changed in the last 6,000 years, it would be foolish to assume that Hearst Hall, Oglethorpe University, or even the city of Atlanta will still be around when the Crypt is supposed to be opened. After so many generations, it would be quite surprising if someone actually knew the location and nature of the Crypt when the time came. As it is, the Crypt was all but forgotten just a few decades after it was sealed. In 1970, a student exploring an off-limits area of Hearst Hall with a flashlight came upon the mysterious sealed door. That student, Paul Hudson, later became a history professor and co-founded the International Time Capsule Society (ITCS) in 1990. The organization’s sole purpose is to track all the time capsules buried around the world and pass that information on to future generations, so that each one can be found and opened at the proper time.

The ITCS estimates there are about 10,000 time capsules buried worldwide, most of which are “lost”—that is, no one knows the capsules’ exact locations. I don’t know whether the bicentennial capsule with my signature in it is on their list; their registry is not available to the general public. Although I can understand that making information like this public might increase the likelihood of theft, it would also improve the odds that the time capsule will be remembered—and that is (or was), after all, the organization’s mission. However, I have some doubts about that mission’s likelihood of success. A note that appeared on their website in 2016 and is still there today says:

Note: Although the ITCS continues to accept time capsule registrations, it currently is not active.

What does “not active” mean for the future? Perhaps a history student centuries from now will stumble upon an old computer from the ITCS and somehow figure out how to extract its list of time capsules! I kid, but surely any effort to collect and maintain this information is better than nothing.

Meanwhile, Back at the Crypt

The people who bury a time capsule—since they usually will not be the ones to open it—must rely on the goodwill of future generations to follow their instructions as to when the capsule should be unearthed. There’s no authority that can ultimately prevent the people of, say, the year 3936 from opening the Crypt of Civilization if they feel like it—or if the instructions for when it should be opened have been lost. If history has shown us anything, it’s that buried treasure (even if the treasure is simply knowledge) has a habit of escaping.

Note: This is an updated version of an article that originally appeared on Interesting Thing of the Day on April 30, 2005.