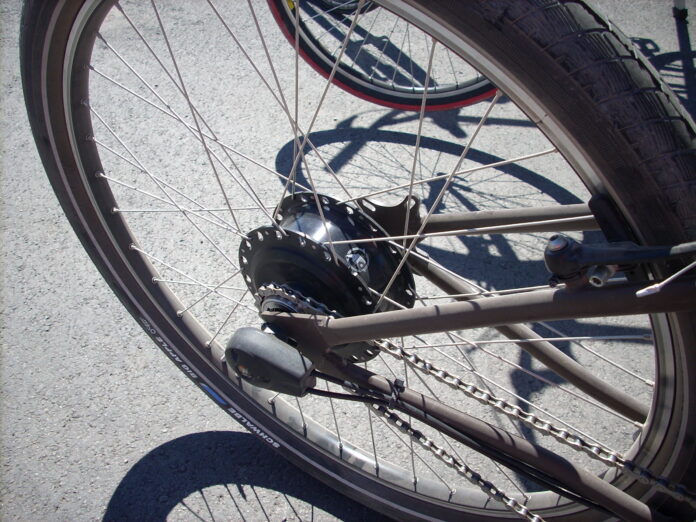 When I first learned to drive, I learned on a car with a manual transmission. It never seemed especially difficult because that was what I got used to. In fact, the first time I had to drive an automatic, I remember being very confused. What was I supposed to do with my left foot? Do I not have to shift at all? And if it’s automatic, then what’s with all these different choices on the gearshift lever? I quickly got the idea, of course, but still preferred the increased control and responsiveness I got from making my own decisions about when to shift. It would therefore seem that I should have the same attitude about bicycles, which not only require manual shifting but typically have many more than four or five gears. But manual bicycle transmissions have always given me trouble, and I’ve frequently wished I could have the convenience of an automatic transmission on a multi-speed bike.

For the record, I am not what you’d call an avid cyclist. Indeed, I’m somewhat embarrassed to say I don’t even own a bike right now, because I work at home, I walk most places I need to go, and on the occasions when I have to travel beyond walking distance, I nearly always need to be transporting more people and/or goods than a bike could accommodate. Nevertheless, I like the idea of bike ownership very much—good exercise, good for the environment, and so on.

But even when my bike was my sole form of transportation a number of years ago, I never fully grasped the way bicycle gears worked. That is to say, I understood the mechanics, but actually using them was another story—the logic of how one must manipulate those levers to reach the desired balance between torque and speed always seemed a bit like a black art. It was not a simple linear progression of lower to higher as on a car, but a function of the ratio of the front gear size to the rear gear size, both of which are variable. My usual practice was just to fiddle with the controls until pedaling felt about right, then leave them where they were until I couldn’t stand it any longer.

Another problem with shifting gears on bicycles is that the derailleur—the mechanism that moves the chain between gears of different sizes—is by nature imprecise. Although some designs are better than others, over- or undershooting your desired gear is common, and if you’re pedaling too fast or under too heavy a load, the chain can easily slip off the gears entirely, requiring a greasy manual adjustment. Wouldn’t it be nice if bikes could figure out how to change their own gears as painlessly and accurately as cars with automatic transmissions?

Gearing Up for a Change

Sure enough, automatic bicycle transmissions of various kinds have been in development for nearly 50 years, though they’re still quite rare (and often expensive). Mechanically, the main thing needed for a basic automatic bike transmission is a motor or piston that moves the chain between gears in place of the standard lever-operated cable. This is a relatively straightforward engineering problem, but the slightly trickier thing is working out how and when to tell the gears to shift. That computation requires the use of a tiny, battery-operated computer along with sensors that determine the current gear and the speeds at which wheels, pedals, and sprockets are moving. The computer constantly recalculates the optimal combination of front and rear gears to keep the rider at a consistent pedaling cadence, automatically signaling the gears to shift lower when going uphill or higher when going downhill. Using a controller on the handlebars, riders can, if they want, adjust the gearing to provide a more intense workout or a gentler ride; they can also override the automatic shifting entirely and use it as a power-assisted manual transmission.

The first automatic bicycle transmission was designed by the Browning family, whose main claim to fame had been gun design. For a while, Browning Components, Inc. was an independent company based near Seattle that focused solely on bicycles and bike transmissions. (It is now entirely defunct, as far as I can tell.) Their most interesting innovation was a special gear with a hinged section (somewhat like a pizza slice) that swung in and out to guide the chain from one gear to the next. It kept the chain engaged in sprockets at all times, rather than simply dropping onto the next gear, virtually eliminating the possibility of the chain slipping; it also made it possible to shift smoothly and almost silently regardless of speed or load. You can still find used Browning bikes or transmissions with some effort and luck.

Shimano, the largest manufacturer of bicycle components such as brakes and shifters, also got into the automatic transmission business for a while. One of their designs used a seven-speed, internally geared hub; another used a power-assisted derailleur system, but added an automatic, powered suspension to adjust the comfort of the ride to fit current conditions. But Shimano, too, stopped making their automatic bike transmissions, presumably because they were unable to find enough people willing to pay a premium for them.

Adding an automatic transmission to a bicycle seems—in the abstract at least—like a wonderful step forward in user interface. It replaces something awkward with something invisible, which is the way good technology should be. But as numerous manufacturers have seen, cycling enthusiasts aren’t warming to the idea very quickly. Some are put off by the extra weight; some feel it’s not worth the money just to avoid having to move a lever; and some just think automatic transmissions are for wimps. Having never used one of these bikes myself, I can’t say whether the performance would be improved enough to make me want to ride my bike more often, but at least I would no longer view gear shifting as the annoyance I do now.

Note: This is an updated version of an article that originally appeared on Interesting Thing of the Day on June 26, 2003, and again in a slightly revised form on October 5, 2004.