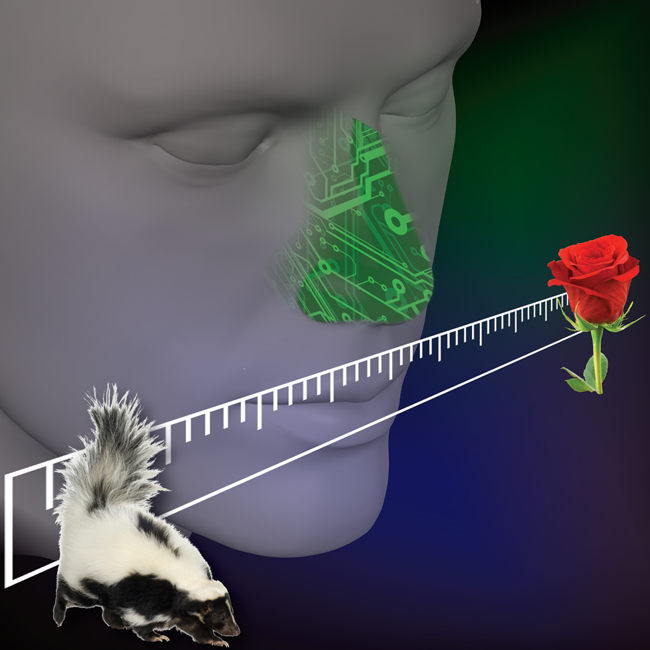 While out for a walk in my neighborhood, I caught a whiff of something that instantly made me think of my grandmother’s house. I haven’t experienced that smell—either from its original source or elsewhere—in maybe 25 years, but the memory of being back at my grandmother’s house was immediate and striking. On the other hand, I can’t really remember or recreate that smell in my mind; either it’s there or it isn’t. I have convenient analog and digital methods of recording images and sounds so that I can see and hear them later, but no way to capture the scent of a dish at a restaurant, a favorite vacation spot, or any other smell that moves me in some way.

I don’t normally think of smelling as being something within the province of machines. I understand, of course, that devices like smoke detectors and breathalyzers perform what amounts to mechanical olfaction of sorts, but I was still sort of surprised to learn that increasingly sophisticated artificial noses are being incorporated into robots and other devices. What intrigues me more than anything is how such sensors might work. How does one go about measuring and quantifying something as broad and seemingly subjective as smell?

All smells result from molecules of various chemicals floating through the air. Not all substances have a smell—only those containing chemicals that are volatile (meaning they evaporate easily). Our nasal cavities contain millions of neural receptors, of about 350 different types—all of which respond to different chemicals. Depending on which chemicals are present and in what quantities, different sets of odorant receptor neurons are activated; the brain decodes each pattern and assigns a meaning to it: “floral,” “putrid,” “Grandma’s house,” or whatever. Therefore, getting a machine to do the same thing involves two challenges: detecting individual chemical components, and figuring out what a specific combination of components in a given proportion represents.

One way to detect chemicals in the air is to use large, expensive laboratory machines such as gas chromatographs and time-of-flight mass spectrometers. These devices can very accurately detect minuscule amounts of volatile chemicals in air samples—but they also detect substances that have nothing to do with smell, so determining just which parts of their output are relevant adds more complexity to the problem. They are also, so far at least, not very portable. But other, more direct—and more compact—methods of artificial smell detection have been developed. Here are just a few of many examples:

Decoding output from an array of sensors (of whatever sort) is an interesting challenge, because substances that are very similar chemically sometimes smell much different from each other; conversely, substances that smell nearly the same can be completely different at the molecular level. For this task, researchers often rely on neural networks, software that can be trained to identify patterns and make educated guesses about new combinations based on their similarities to patterns that have already been verified.

So where is all this technology going to be put to use? And what about those robots?

Artificial noses show the most promise in applications where the human nose is insufficiently sensitive or discriminating. For example, sensors could detect when food is spoiled long before a human nose could—an artificial nose may be built into your refrigerator one day. Just as the bacteria that cause spoilage produce distinctive odors, so do some disease-causing bacteria. Devices have been developed that can diagnose numerous illnesses by smelling a patient’s breath.

But it’s one thing to be able to identify an odor in a test tube; it’s another to be able to trace the source of an airborne scent. This is where robots come in: a mobile platform with an artificial nose can continuously sample the air, reorienting itself dynamically to move in the direction where an odor is strongest. This makes robots that can smell ideal for locating gas leaks, explosives, drugs, and other dangerous stuff—since robots can go places where it would be unsafe to send a human or a dog. One rather gruesome use for sniffing robots is locating buried bodies; this is but one of many possible forensic applications. A mechanical bloodhound may be years in the future, but it’s not at all far-fetched.

If You Could Bottle This Smell…

Many years ago a company called DigiScents made headlines with its iSmell device, a desktop computer peripheral that could synthesize thousands of scents. Their idea was that games could be enhanced with smells (presumably lots of smoke and burnt rubber), email from that special someone could be scented with perfume, and so on. When DigiScents went out of business in 2001 before the iSmell became commercially available, no one was particularly surprised—why do we need to smell computer games, anyway? But I think the real problem was that they only had half of the solution ready: the output but no input. I suspect that if someone created a pocket-sized gadget that could record the scent of a bakery, garden, or any other smell you encounter and play it back accurately on command, it would be a huge success. I, for one, would gladly pay for a machine that could make scents of my childhood.

Note: This is an updated version of an article that originally appeared on Interesting Thing of the Day on July 9, 2004.