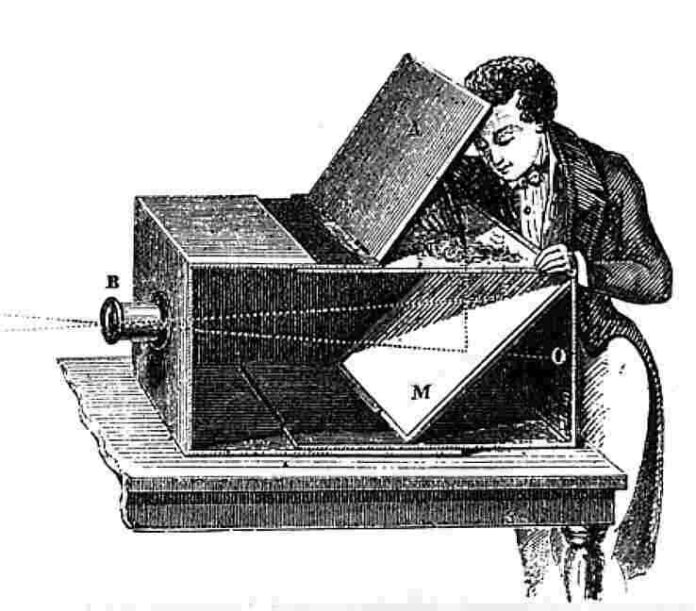 Although I like to think of myself as a multitalented “Renaissance man” of sorts, I must admit that when it comes to drawing and painting, I have absolutely no ability. I’m truly pitiful at Pictionary, and I couldn’t paint my way out of a paper bag. Or so I’ve always thought. Based on what I’ve learned about the methods of some famous painters, I could probably produce some fantastic art from the inside of a very large paper bag, as long as it had a pinhole on one side and pretty bright light outside. All I’d have to do is trace the image projected by this primitive camera obscura. According to a controversial theory, this technique—or something very much like it—gave some world-renowned artists a little help as far back as 1420. Then again…maybe not. Getting to the bottom of this puzzle has been the consuming passion of quite a few artists, historians, and optical engineers.

Tracing over a projected image is a straightforward notion, but if you’ve ever tried it (as I have) you probably discovered that getting good results is not as easy as it sounds. The easy part is getting the proportions right. But lots of things in any image lack well-defined borders, and trying to make sense of textures and the effects of light and shadow while tracing something is quite a complex undertaking. If, instead of tracing, I were painting, the challenge would become even greater, as I’d have to carefully match gradations in color—and as soon as I applied a dark paint to the light surface, the image in that area would virtually disappear. All that to say: projection or no projection, producing a convincingly realistic drawing or painting takes a lot of skill and practice. So if it turned out that one of the great masters from centuries ago really did pull this off, I’d be no less impressed by the final product—and more impressed by the artist’s cleverness.

We know that numerous artists nowadays, and over the past couple of centuries, have employed just such a technique; many of Andy Warhol’s best-known pieces, for instance, were done this way. Prior to the invention of photography, though, the only images that could be projected were live representations of the real world. The technology to do this, the camera obscura, has been known for many centuries—possibly since as far back as the fifth century BCE. If a tiny hole is placed in the wall of a very dark room and the light outside is bright enough, an inverted image of the outside scene is projected onto the wall inside. But the image is usually fairly dim and fuzzy. Two important innovations in camera obscura design occurred in the 16th century: the addition of a lens (which made the image sharper) and a mirror (which could direct the image onto a horizontal surface rather than a wall). And there are a few scattered records from the mid-16th century of artists suggesting the use of a camera obscura as a drawing aid, though the earliest confirmed date of anyone actually doing so is 1603.

It should therefore come as no surprise that an artist might have used such a technique in the 1660s, and that’s just what some people have claimed for more than 100 years about Dutch artist Johannes Vermeer (1632–75). These suggestions first surfaced when people began noticing that the proportions in Vermeer’s paintings didn’t match those of other works from the time, in which the subjects were typically painted at the size the artist perceived them to be. But in Vermeer’s works, objects and people closer to the foreground are larger than those in the background—seemingly in just the proportions that they would be in a photograph—or a tracing from a camera obscura image. Several other clues in the geometry and lighting suggested the same thing, but there was no evidence that Vermeer actually had (or even had heard of) a camera obscura. In addition, since the scenes in question were interiors, presumably any image created by a camera obscura would have been incredibly dim. So for many decades the debate continued.

Then in 2001, architect Philip Steadman described in his book Vermeer’s Camera detailed research into the geometry of several of Vermeer’s paintings—backed up with photos of painstakingly recreated miniatures of the rooms from the paintings. Steadman’s studies showed that given the dimensions of the room in each scene (which he carefully calculated) and the viewpoint and size of each painting, all are absolutely consistent with an image of the room being projected onto its back wall with a camera obscura. In other words, given not only the uncanny accuracy of the paintings but also the specifics of their perspective, Steadman felt it was nearly a mathematical certainty that Vermeer partitioned off a small corner in the back of this room as a camera obscura and painted over the image on a canvas that hung on the wall. (In at least some cases, X-ray evidence shows that although there was no underlying sketch, there was a monochrome image beneath the color paint; this makes sense considering the very dim conditions inside the camera obscura.)

In 2013, the story took another big step. Inspired in part by Steadman’s work, an inventor named Tim Jenison set about to recreate one of Vermeer’s paintings. Jenison claimed no artistic talent, but he did know a few things about optics. So he devised a mechanism that would have been entirely possible using 17th-century technology: a combination of a camera obscura and a small mirror positioned at an angle above the canvas. Using this setup, along with a room designed to be an exact duplicate of the one in Vermeer’s “The Music Lesson” (including live models in period dress), Jenison spent seven months creating his own version of a Vermeer. The striking results strongly suggest that Vermeer used a similar setup himself. The entire project was documented in the film Tim’s Vermeer, directed by Teller and produced by Penn Jillette (of Penn & Teller).

Both Steadman’s book and Tim’s Vermeer met with a certain amount of controversy, not least because they seemingly suggest that Vermeer did not produce his works with artistic skill alone. (Oh, the horror to think that he might have supplemented his considerable artistic skill with technological skill!) But the evidence from both sources is pretty convincing—and, of course, it mainly confirms what a lot of people had suspected all along.

Shortly after Vermeer’s Camera was published, another book hit the shelves that made much broader (and more controversial) claims—and also influenced Tim Jenison’s work. Painter David Hockney, in his book Secret Knowledge, alleges that European artists used optical aids for painting as early as the beginning of the 15th century. But rather than using a camera obscura, Hockney believes these artists used a concave mirror to project an image onto the canvas; no documentary evidence exists simply because they all chose to keep it a carefully guarded trade secret. Among the many artists on Hockney’s list are Van Eyck, Caravaggio, and Lotto.

Hockney noticed that around the early 1400s, paintings began to show a much more natural representation of light and perspective—that, in some cases, they looked nearly photographic. He was convinced that the level of realism and accuracy they displayed was simply too great to have been done by eye, so he started looking for other explanations. As he went back through history, he noted the use of the camera obscura and other optical aids, and he suspected that the practice may have been much older. He formulated a series of theories about how various works of art over a period of several centuries may have been made by using optics of one kind or another.

Experts in the art world are still divided over Hockney’s claims. Because his theories are so wide-ranging, some of them are bound to be accurate to one extent or another. But many critics believe Hockney has gone too far, and a few have spent considerable effort rebutting his theories. David Stork, a physicist and art historian at Stanford University, has published numerous papers debunking various aspects of Hockney’s book. Stork found alternative explanations for many claims of optical aids, pointing out that none of the available evidence requires one to posit the use of optics in the oldest and most controversial works; there are other, simpler explanations. In addition, Stork finds it highly implausible that the artists could have discovered, created, and kept secret such advanced technology for so many years.

Having read lengthy articles about this debate until my eyes blurred, I feel I have enough information to reach my own conclusion. And that conclusion is: it doesn’t matter. What Hockney, Stork, and I agree on is that even if these legendary masters did use optics, that does not in any way constitute “cheating”; they would simply have been tools of the trade. In the end, I think the years invested in this intellectual exercise might have been more profitably spent painting.

Note: This is an updated version of an article that originally appeared on Interesting Thing of the Day on May 21, 2005.