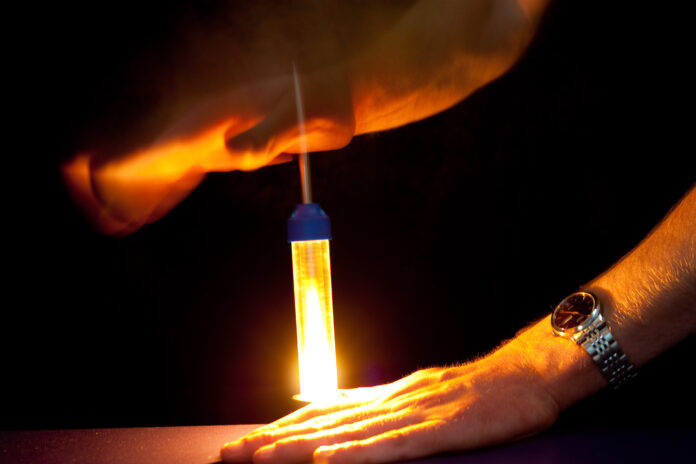 I’ve never been much of a camping enthusiast. It’s not that I don’t appreciate all the great gadgets associated with camping, and I certainly enjoy hiking, fresh air, and getting away from it all. But after toting all our high-tech apparatus into the middle of nowhere, setting up a tent, and rolling out the sleeping bags, I invariably think to myself: this is an awful lot of work for very little comfort. At home I would have had a nice squishy mattress, a flush toilet, clean water, and no mosquitoes. Why am I doing this again? Then it comes time to build a fire and I discover some cruel corollary of Murphy’s Law at work. On those rare days I ever have to attempt this task, it’s always windy, damp, or both. Of course, I know that when matches fail, I can always bring out some specially flammable substance designed expressly for the pyrotechnically challenged. But the latest rage in fire-starting equipment is actually centuries old and uses no chemicals, sparks, or even metal components. Meet the fire piston: a deceptively simple tool that uses compressed air to start a blaze in just seconds.

A fire piston is a small cylindrical object usually made of wood, bone, or plastic. It consists of two main parts: an outer casing, which is hollow but closed on one end, and the piston itself—a rod or plunger that fits the hole in the casing perfectly and whose tip reaches almost, but not quite, to the stoppered end of the tube. The tip of the piston has a small indentation or hole, and just behind the tip is usually a gasket of some kind to ensure an airtight seal—perhaps a rubber O-ring or simply some waxed string. In other words, very basic parts that require little technological sophistication to create.

To use a fire piston, you put a tiny piece of tinder in the indentation at the tip of the piston, and perhaps apply a dab of grease to the gasket for lubrication. Then you place the plunger into the tube and smack it down rapidly. This compresses the air inside, which raises its temperature. Within less than a second, the temperature at the tip of the piston can reach more than 800°F (about 425°C)—enough to turn the tinder into a glowing ember. The pressure also, conveniently, works as a spring that forces the piston back out of the casing. Transfer the ember to a larger pile of tinder, blow for a few seconds, and poof! You’ve got fire.

In an earlier version of this article, I made the rookie mistake of believing something I read on some random webpage, and then compounded the problem by repeating that claim. The claim was that fire pistons work according to a principle called Charles’s law, but that is not only wrong, it’s pretty much the opposite of right. (Charles’s law has to do with the relationship between a gas’s pressure and its temperature, as in rising temperatures make the gas expand.) I hereby repent of my faulty reporting.

In fact, what’s going on is an adiabatic heating process, in which the rapid compression of the air increases its temperature as the pressure increases, and the system doesn’t leave that heat anywhere else to go. You can approximate this effect by inflating a tire with a manual tire pump—yet another piston design—and notice that the pump gets hot as you use it (although that type of design does provide an outlet for most of the heat). This very principle is what makes diesel engines work: the fuel is ignited by rapidly compressed air, not by a spark as in conventional internal-combustion engines. In fact, some people believe Rudolf Diesel may have gotten the idea for his engine from seeing a fire piston being demonstrated.

No one knows who invented the first fire piston. Although the device was patented in England in the early 1800s, a similar design (albeit made from different materials) was apparently in use long before that in Indonesia, the Philippines, and several other southeast Asian nations. The prevailing theory is that in the process of hollowing out a long tube to make a blowgun, a hunter inadvertently ignited some sawdust.

In any case, just as fire pistons were beginning to catch on in Europe, matches hit the scene, and quickly took over as the most popular method of making a flame. And so fire pistons were all but forgotten—at least in the western world—for the better part of two centuries.

But under certain conditions, matches are still no match for a fire piston. Because fire pistons create a watertight seal, they’re virtually weatherproof. And because you’re working with a glowing ember rather than an open flame, wind can actually work in your favor. You do, of course, have to have dry material to burn, but that’s pretty much a given if you’re going to start a fire by any means.

I first heard about fire pistons in an email from one of the many readers who regularly supplement my list of interesting things to research. After browsing a few websites—and, especially, watching some videos of the devices in action—I was simply astonished. I couldn’t believe that something so simple, effective, and useful wasn’t part of every camper’s gear. It might have been, had matches not been invented at just the right (or wrong) time.

Note: This is an updated version of an article that originally appeared on Interesting Thing of the Day on April 3, 2005.