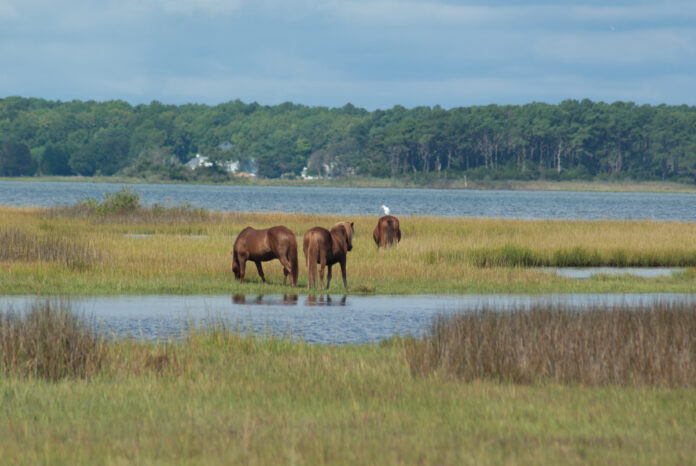 When I was young, my friends and their families would head out to the commercial beaches for their vacations. By “commercial beaches,” I mean the ones with oceanfront hotels, boardwalks, and a dizzying array of lights. My vacations, however, were quite different, as they were spent at Assateague, a 37-mile-long island off the coast of Maryland and Virginia. The island is owned by both states, and the state line divides it in two. Because it is a national seashore and wildlife refuge, buildings on this island are few and far between. Not a hotel, restaurant, or arcade can be found here. The beach offers a 360° view of the sea and sky, with nothing to mar the experience except for horseflies and kamikaze kites.

What do you mean there’s no boardwalk?

Assateague is a natural barrier island, so it is constantly battered by water and wind. Its topography changes often. Since 1866, it has “moved” a quarter of a mile inland. My vacations were spent on the Virginia side of Assateague, and as a child I remember wooden steps and walkways that would take you up and over the high sand dunes. After being away from Assateague for a few years and then coming back as an adult, I found the high dunes were gone, and smaller, less-protective dunes had taken their place. Water and sand are constantly moving on this island. Changes in landscape and scenery on Assateague are expected and accepted.

Most visitors to the Virginia side of the island stay on the nearby island of Chincoteague. Because there are no hotels on Assateague itself, vacationers must drive onto the island and then out to the beach, a short 5–10 minute car ride from Chincoteague. Due to this relative isolation, you might find yourself wondering what appeal this island could have. Not for entertainment junkies, Assateague has many things to offer those who love an unspoiled beach. A short walk up or down the coast will take you away from the summer crowds and into remoteness, where you may only encounter a lone fisherman or wandering beachcombers. On the southern end of the island, 4-wheel drive vehicles are allowed (by special permit) to drive out on the sand, allowing access to the southern tip of the island and more secluded areas.

Aside from swimming, sunbathing, and fishing, the island has many outdoor activities. Nature tours are diverse and can range from marsh walks to bird-watching expeditions. Canoe and boat rentals allow for more personal and scenic views of the island and its waterways. There are also a myriad of chartered excursions for inland and ocean fishing. For those who don’t have their sea legs, crabbing and clamming are popular and easy. The Assateague Lighthouse, reached by a short walk through a pine forest, is occasionally open for visitors to ascend. Additionally, there are many bike paths that transverse the marshes and forests, allowing for close views of the vast populations of waterfowl, migratory birds, and mammals. At any other beach, an encounter with wildlife usually involves a seagull stealing your sandwich. At Assateague, wildlife and nature take center stage, and humans are merely visitors just passing through.

Although a harsh environment, Assateague has a herd of wild ponies, more casually referred to as the “Chincoteague Ponies.” These horses have inhabited the island for at least 300 years. Originally thought to have swum ashore from a wrecked Spanish galleon, it is more widely believed that settlers brought them on the island to graze. Today they survive on marsh grass and other island roughage. Two separate herds exist, one belonging to each state, and they are kept isolated from one another by a fence at the border. Although true horses, they are often referred to as ponies due to their small stature, which is most likely a consequence of their marsh diet.

To keep the population numbers of the Virginia herd down, the ponies are annually driven across the channel in late July to the neighboring town of Chincoteague. Here, the horses (mostly foals) are auctioned off and the money collected benefits the Chincoteague Volunteer Fire Company. In recent years, individual horses were sold for an average of about US$2,300, with the largest bid being $25,000 in 2015 for a single horse! The last few Pony Penning events have auctioned off an average of 58 horses per year. The number of horses auctioned is dictated by herd size, as the Virginia side of Assateague Island is only permitted a maximum of 150 horses. After the auction, the remaining horses swim back across the channel and resume their lives on the island. The actual pony swim officially dates to the 1920s, although some form of pony herding has occurred since the 1700s. Pony Penning is an extremely popular event, and festivities span an entire week. Large crowds of hopeful bidders as well as spectators crowd onto the island. Today, Chincoteague ponies can be found all across the United States as a result of this auction.

Marguerite Henry wrote a notable series of children’s books about the horses and the annual swim. The first and most popular book, called Misty of Chincoteague, was written around 1948 and was based on a real Chincoteague family and their pony. This pony (the “real Misty”) died in 1972, and was allegedly stuffed and put on display. I don’t recall ever seeing the stuffed version of Misty while vacationing in Chincoteague, and I prefer to keep it that way.

Today the ponies can be seen in a variety of places on the island at different points of the day. They usually roam in smaller herds, and it is common to see them off in the distance relaxing under a copse of trees or grazing in the marshy fields. Closer encounters occur frequently along the wildlife trails and beach road; here tourists with cameras will crowd around, snapping photos as the horses languidly amble about. Signs posted all over state that “Wild Ponies Bite and Kick,” but that doesn’t seem to stop anyone from sidling up to them. They are part of the landscape and culture of Assateague as well as Chincoteague, and they make this already fascinating area even more extraordinary.

Editor’s note: In late 2018, it was reported that a serious infection has killed a number of the ponies, and authorities were working hard to both treat affected ponies and develop a vaccine.

The way it should be

As an adult, I still love to visit Assateague Island. Even though the nightlife is limited, and there are no boardwalks or flashy rides, a vacation here is what it should be: relaxing. There is no sense of hurry, no rush, no multilane highway packed full of cars ready to crowd the shore. It’s a shame to see how commercialized many beaches are becoming. But I guess we each have our own ideas as to how a vacation should be spent. Give me a view of the ocean in one direction, a dune full of sea grass in the other, and the possibility of ponies stomping up the shore. I want to enjoy the sun without a great big hotel looming over my shoulder. I can only hope that Assateague will always stay the way it is.

Note: This is an updated version of an article that originally appeared on Interesting Thing of the Day on August 16, 2006.