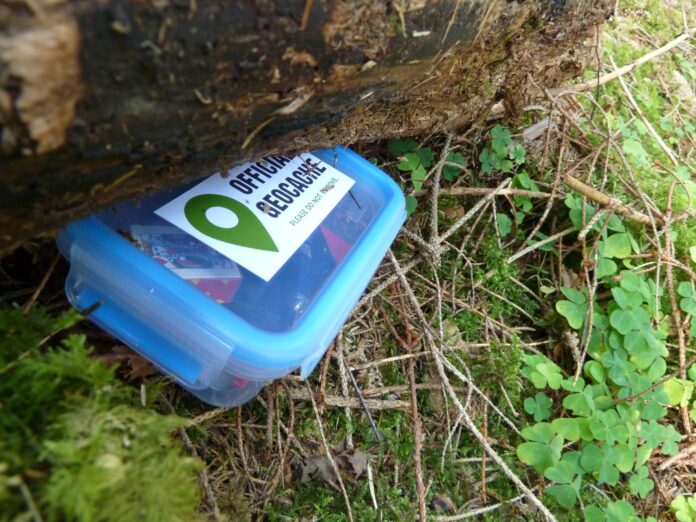 Hark back with me to a time, long ago, when human beings outnumbered GPS receivers. I know, it’s weird to think about, right? But at this moment I have a GPS receiver built into my smartphone and another built into my smartwatch, and at a rough tally, the total number of such devices in my house right now is eight. Once a specialized, expensive gadget for outdoorsy types with plenty of disposable income, they’re now so common we barely think about them. Every time you ask your car or your phone for directions, you just assume that its GPS circuitry will know where you are and be able to tell you how to get exactly where you want to go.

But back in 2003, when even someone with as much of an interest in gadgets as me couldn’t come up with a good reason to buy a GPS receiver, I was tickled to read an article about a new activity just for those relatively few people with the right hardware. Combining recreation, exercise, high-tech gizmos, and a bit of detective work, geocaching was, at the time, the latest geek rage.

I’m In It for the Cache

Geocaching became possible in 2000, when the U.S. government eliminated a policy called Selective Availability that artificially reduced the accuracy of GPS measurements by non-military folk to a radius of about 100 meters. Once much more precision was possible for civilians, interesting new applications emerged, one of which was a modern version of a treasure hunt. The idea behind geocaching is extremely simple: hide some stuff (the cache), take note of its coordinates using your GPS receiver, publish those coordinates on the web, and invite other people to come find it (using their own GPS equipment as a guide). Nowadays it’s even simpler, as you can just download a smartphone app that’ll display details about all nearby caches on an interactive map.

The cache is usually a watertight container holding a logbook (for finders to record their names and when they located it) and any other random trinkets the owner wishes to include. Usually a cache contains nothing of tangible value; the reward is in the discovery itself, though you might get a small souvenir for your efforts. Finders often leave a memento of their own for the next geocacher who comes upon that site; in more advanced versions of the sport, a cache might contain clues that lead to yet another cache, or an object that’s intended to be relocated to the next cache the person discovers.

If your smartphone or any other GPS receiver can indicate your exact position, it may seem as though there’s not much sport—just walk to those coordinates, pick up the box, and you’re done, right? But it’s quite a bit more involved than that. For one thing, GPS receivers still have some margin of error—you may need to search an area with a radius of up to 10 meters. For another, geocaching coordinates generally do not include altitude. A cache could be hidden on the side of a mountain, underwater, in a tree, under a rock, or somewhere inside a public building, all of which would make for a very interesting search. More importantly, knowing where something is doesn’t imply you know how to get to it; the most creative and challenging cache locations are those that require considerable planning, skill, and physical effort to reach.

Geocaching went from a clever idea to an international craze within just a few years. Now, although the newness and exclusivity have worn off, there are approximately eleventy bazillion caches hidden around the world, including dozens within walking distance of my house. There are caches I’ve walked by for years, and would never have known about were it not for the fact that they show up in an app on my phone. And that’s what I find so nifty about geocaching: it’s a way to discover another dimension of your own neighborhood, as you find treasures hidden (almost) in plain sight.

Note: This is an updated version of an article that originally appeared on Interesting Thing of the Day on September 13, 2003, and again in a slightly revised form on January 11, 2005.