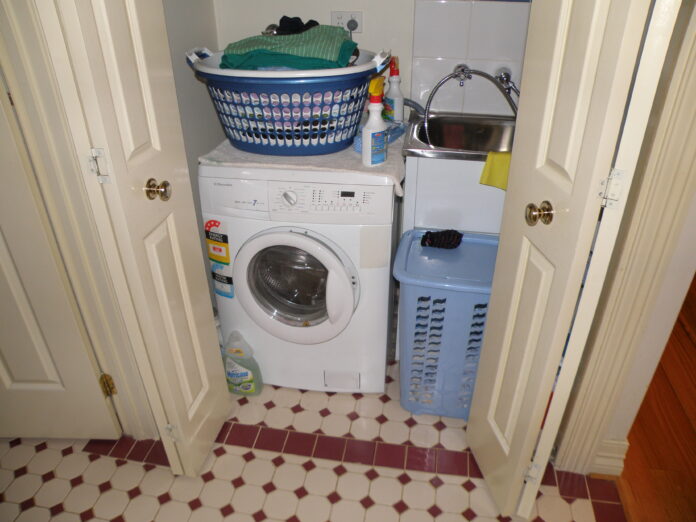 During the years my wife and I were living in apartments—in San Francisco, Vancouver, and Paris—we always looked for units that had their own washer and dryer. We had both spent enough time using laundromats and shared communal laundry rooms to recognize that there is a positive correlation between convenience of laundry facilities and marital bliss. Even though such apartments were often harder to find and more expensive, we knew the extra effort was worth it.

Once when we were looking for a place, we came across an otherwise suitable apartment that included a small extra room with hookups for a washing machine, but no space for a dryer—nor any way to vent one. That sounded to me like a problem that ought to have a technological solution, so I began searching the web. Sure enough, I found a class of machines that used a single chamber for both washing and drying—put clothes in dirty, push a button, wait an hour or two, and take them out clean and dry. That by itself was interesting, but what really got my attention was the fact that these devices could dry clothes without any sort of vent. I had always assumed that hot, moist, linty air has to come out of a clothes dryer one way or another—it seemed like one of those cosmic truths you just couldn’t get around. But you can get around it, and surprisingly enough, one way to do so is to use water to dry your clothes.

I first saw one of these machines when I went over to a friend’s apartment in San Francisco and saw one of the combo washer/dryer machines in the corner humming merrily along. After it washed his clothes, a different light came on and it started drying them. It didn’t give off any heat, which was actually slightly disappointing because that room was a bit chilly. He said it worked extremely well, the only minor drawback being that it had a relatively small capacity. According to the sticker on top of the machine, it was expected to consume about US$12 worth of electricity in a year—or about as much as a typical San Franciscan spends on coin-operated washers and dryers in a month.

But it wasn’t the compactness or energy efficiency of this machine that intrigued me, it was the way it got the clothes dry. Ordinary dryers suck in cool, dry air from the room, heat it, blow it through the clothes, and then discharge the damp, hot air outside through a vent. This dryer, on the other hand, runs the exhaust through a heat-exchange system to cool it. Cold water flows through the heat exchanger, absorbing heat from the air. As the air cools, the moisture in it condenses and runs down the drain (along with the used cooling water); the dry air is then heated again, sent back through the clothes, and the cycle continues. The upshot of this is that drying your clothes with a ventless dryer requires a few extra gallons of water, but eliminates the need for a vent and keeps your laundry room from overheating.

Years later, we moved into an apartment in Paris that had space in the kitchen for a washer, but nowhere to put a dryer. No problem—combination washers and ventless dryers were commonplace there, so we bought one and installed it in all of two minutes—we pretty much just plugged it in, attached the input and output hoses, and slid it into place. It served us well until we moved again, and we really dug the convenience of washing and drying all at once.

Not all ventless dryers (or condenser dryers, as they are often called) have built-in washing machines, and not all of them use water to condense the moisture from the air. Another design—frequently seen in Europe but hard to find in North America—has heat exchangers that use cool air from the room to absorb the heat. This means that hot (but dry) air is discharged into the room; the condensed water drains away just as it does in the combination units.

It’s easy to find ventless dryers, washer/dryer combos, and even units that can switch between vented and ventless modes. Major brands available in North America include Equator, Haier, LG, and even Whirlpool. And yet, although these devices do solve a problem for those in places with limited space or venting options, they haven’t achieved widespread popularity, for a combination of three reasons: higher price, lower capacity, and longer drying time compared to conventional dryers. I hope that changes some day because—and I speak from experience—the whole notion that you can wash and dry your clothes with the push of a single button while keeping your apartment cool and dry fills me with geeky delight.

But there’s one final frontier of laundry automation, and it’s already on its way to a solution: folding. A machine called FoldiMate, projected to ship in late 2019 for about US$1,000, can fold shirts, blouses, pants, towels, and pillowcases as fast as you can feed them in. That’s extremely cool (if pricey for what it does), and the manufacturer hints that in the future they may incorporate wrinkle removal and other laundry care features. (It can’t fold underwear or pair socks, but I expect such capabilities aren’t too many years in the future.)

If the FoldiMate or something like it could be integrated with a washer/dryer, though, that would be just about perfect. I remember an old Lost in Space episode in which Mrs. Robinson put the family’s dirty clothes into a tabletop box, pressed a button, and then pulled out clean, dry, folded, and plastic-wrapped garments a few seconds later. That’s ultimately what I want. Then my wife will be happy to do the laundry while I replicate dinner.

Note: This is an updated version of an article that originally appeared on Interesting Thing of the Day on November 20, 2003, and again in a slightly revised form on September 11, 2004.