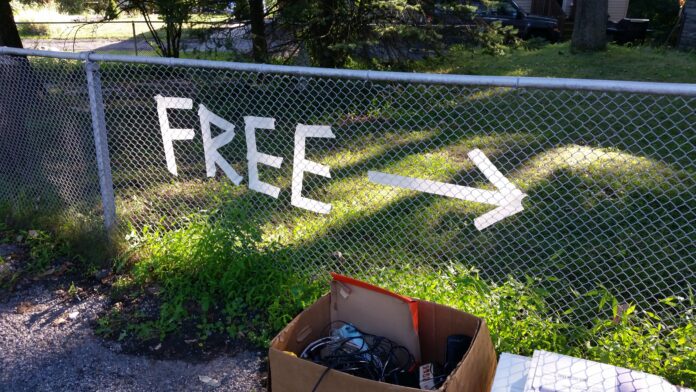 As I write this, it has been over six years since my wife and I last moved, making this the longest we’ve ever lived together in the same place. I’ve enjoyed not having to deal with the hassles of moving, but painful though it may be, moving always forces me to get rid of stuff I don’t need and eliminate vast amounts of clutter. Having lived here for so long (and with two kids, no less), we haven’t had that safety valve, and our supply of unwanted stuff has grown to an unmanageable size. The usual answer to too much stuff is fill up the garage or basement or whatever, and when all your storage space is gone, you rent a storage space. Of course, you can sell or give away your unneeded stuff, but finding a good home for it, and transporting the stuff to the new home, is often more trouble than it’s worth.

The excess stuff we have is, for the most part, perfectly good—just no longer needed. Random small appliances and electronic gadgets. Lots of books we’ve read and won’t read again. Clothes the kids have outgrown. Extra dishes from when we had time to throw dinner parties. The list goes on. These kinds of things would be too much bother to sell on eBay, and they’d make little or no money at a garage sale. But we don’t want to simply throw them away, either, because they could be useful to someone. But who needs these things? Freecycling, or free recycling, has the answer.

Yours for the Asking

The idea of freecycling is simplicity itself. You sign up online to join one or more groups in your local region. When you have something to give away, you post a message to the group, which appears on the group’s webpage and may also be delivered by email, according to each member’s preferences. Anyone else in that local group who wants it sends you a reply—and arranges transportation, if necessary. There are no trades or barters, and no strings attached. Everything is completely free, period. And, of course, if you need something that hasn’t already been posted on the list, you can ask for it. Maybe you’ve moved into a new apartment that doesn’t have an ice cube bin, and someone else happens to have one, but didn’t think to list it. Or maybe it’s something larger or stranger, like a wheelbarrow, a rocking chair, or a 50-foot Ethernet cable. You never know: someone just might have what you need. As long as you can pick it up yourself, it’s yours.

Freecycling began in Tucson, Arizona in May 2003 as a way to help reduce the quantity of waste sent to landfills. Since then, it has spread to many thousands of local groups in more than 110 countries. From what I’ve read, though, it sounds like most participants aren’t doing it for the environment. They’re doing it because it’s a convenient and free way to get rid of things you don’t need or acquire things you do. If it happens to keep landfills from overflowing too, hey, that’s a lovely bonus.

Free As in Beer, Not As in Speech

But all is not peace and goodwill in the world of freecycling. For starters, there’s the term Freecycle itself, which was at the center of a trademark dispute a number of years ago, as the organizers of The Freecycle Network tried to prevent other organizations from using the term, and also fought against the use of freecycling as a verb. The organization lost that trademark battle in the United States in 2010, although the name freecycle.org is now trademarked.

Be that as it may, one result of the earlier, heavy-handed efforts to protect the trademark was the creation of several other free recycling networks that perform virtually the same function but were separate simply to avoid having to conform to rules they perceived as excessively strict and unreasonable. All of this makes the process more confusing for the people who want to use it. It’s a pity—and a great irony—that a notion built on the free exchange of stuff for the benefit of the environment was hampered by needlessly self-imposed legal restrictions.

But whether under the auspices of The Freecycle Network, as part of another organization, or informally among members of a school, church, or other group, the freecycling concept is a great idea—sort of like Craigslist, but only for free stuff. In some urban areas, I’m sure you could furnish an entire apartment in a week or two by freecycling, not only saving money but doing a great favor to the people who need to get rid of their stuff.

Increasingly, too, there’s been quite a backlash against consumerism and its associated clutter, as people begin to realize that they’re actually happier with less stuff than with more. Even though I don’t buy a lot of merchandise, as I look around my home, I realize that I’ve only used, or even thought about, maybe 10% of its contents in the last year. Do I really need the other 90%? When I find possessions that no longer enrich my life in any way, at least I can let them enrich someone else’s life.

Note: This is an updated version of an article that originally appeared on Interesting Thing of the Day on May 7, 2007.