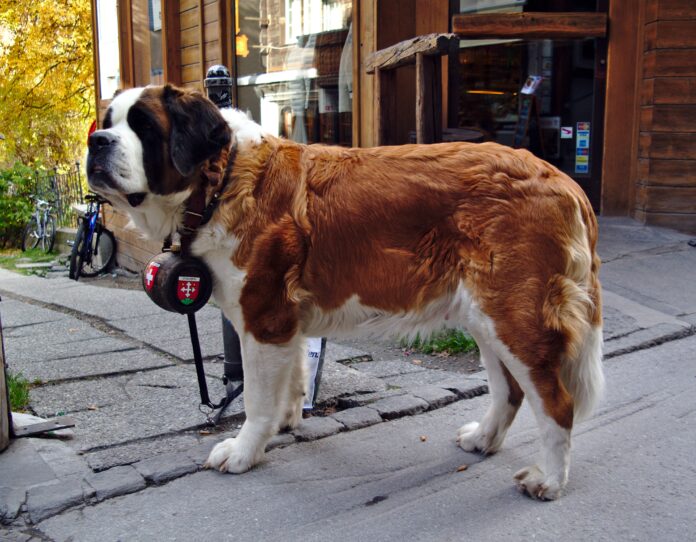 Back in October 2004, I read an article with some shocking and disheartening news: the Swiss monks responsible for breeding St. Bernards since at least the 17th century were getting out of the dog business. The last 18 dogs living in the alpine hospice where the breed originated were up for sale. At that time, I didn’t know anything about St. Bernards except that they were known as rescue dogs and usually pictured wearing a little barrel or cask on their collars. It had not occurred to me that there was some particular base from which their rescue operations had traditionally begun, or an actual Saint Bernard after whom the dogs had been named. But as I read about the imminent end of the monks’ caretaking operations, I began wondering about the real story behind these dogs. Did they ever really perform rescues? How did the monks figure in? And what was the deal with those little casks? Glass of brandy in hand, I began my research.

Anyone for a Walk?

The story begins in the year 962, when Bernard of Menthon founded a monastery and hospice in the Swiss alps. To the north is the Swiss canton of Valais; to the south, the Valle d’Aosta in Italy. It was not for seclusion that Bernard chose this particular spot, at a snowy pass some 8,000 feet (2500m) high. The pass was often used by pilgrims making their way from France into Italy to visit Rome, and was known as a treacherous and forbidding spot. Bernard’s idea was that the hospice could provide shelter for the pilgrims and aid to those who became lost or injured on their journey.

By the time Bernard was canonized in 1681, the hospice he had founded centuries earlier had begun keeping dogs, which the monks found helpful in carrying out their rescue missions. Over many years, the monks bred a type of dog ideally suited to both the weather and rescue work—a huge, energetic, friendly, and faultlessly loyal breed related to the mastiff, with thick fur and keen senses of smell and hearing. And from the early 1700s, when the oldest surviving records were made, until the late 20th century, the dogs assisted in rescuing about 2,500 people. The dogs were first referred to informally as “St. Bernards” in 1833, and the name became official in 1880.

In the 1950s, however, helicopters appeared on the scene, and technology began increasingly to fill the dogs’ role. The last time a dog helped with a rescue was around 1975. For decades afterward, the monks—whose number eventually dwindled to four—continued to raise the dogs. But St. Bernards are costly to feed and require a great deal of time to care for; the monks felt that since the dogs were no longer assisting them, their limited time and money would be better spent serving human beings. And so, in late 2004, the monks put the dogs up for sale.

Although from the monks’ perspective this was a reasonable and utilitarian decision, it prompted a tremendous public outcry. Those most vocally opposed to the change included local merchants, dependent as they are on the business of thousands of tourists who come to the area each summer only to see the famous dogs. In less than two months, the matter was resolved. A couple of Swiss philanthropists donated the equivalent of over US$4 million to buy the dogs and set up a nonprofit organization called the Barry Foundation) to continue the breeding program and care for the dogs. The St. Bernards spend their winters in a kennel in the nearby city of Martigny but return to the hospice each summer to visit the monks. A museum honoring the dogs was built in Martigny and opened in 2006.

As for the barrel on the collar, it first appeared in a painting by artist Edwin Landseer called “Alpine Mastiffs Reanimating a Distressed Traveler” in 1820; Landseer was only 17 at the time. The cask was thought to contain brandy and quickly caught on in the public imagination, though the monks and their dogs never actually used such a thing. (Alcohol, after all, could hasten dehydration—not a good treatment for a snowbound traveler.) Nowadays, that little barrel could prove more useful as a carrying case for a GPS receiver and a cell phone, giving the next generation of St. Bernards updated rescue capabilities more suitable to the modern age. And, if the helicopter is on its way anyhow, maybe a wee nip of brandy wouldn’t be so bad after all.

Note: This is an updated version of an article that originally appeared on Interesting Thing of the Day on February 3, 2005.