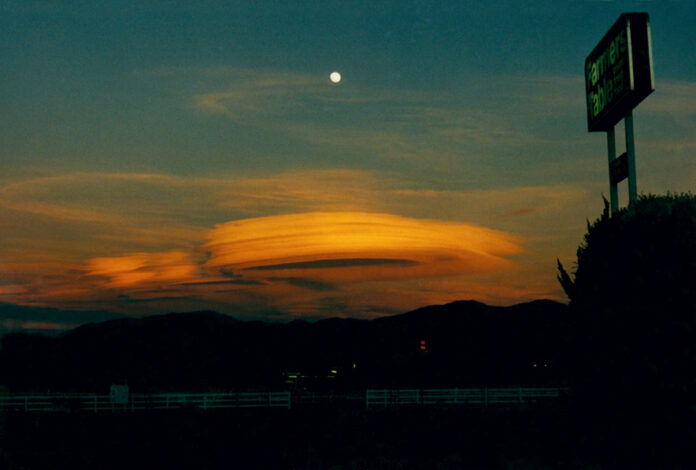 One summer, I was driving from San Francisco to Los Angeles along California’s Interstate 5. I’d left the Bay Area mid-morning, and after five and a half hours of driving on the long, straight highway through the great central valley, I was approaching the modest range of mountains that separates that valley from southern California. I was happy to be within an hour’s drive of my destination so early in the afternoon, and had already started to plan the hours of evening I had gained by leaving early and not stopping to eat. It wasn’t going to go the way I was planning, though.

I got stopped by a cloud.

Within an hour’s drive of the mountains, I started noticing that something was—well, it looked like something was balanced on top of the nearest mountain. As I got closer it started becoming obvious that a giant spacecraft was poised over the mountain, maybe even tethered to it like an airship to a mooring post. It was colored as you’d expect a cloud formation to be, but had sharp, clean edges, and a precise layered structure. More ominously, I could see that as time passed, and my view of the mountain stayed more or less the same, the nearby clouds were moving but the “thing” wasn’t.

They Want You to Think It’s a Cloud

Of course, I always knew it was a cloud, of some kind. But the closer I got to it, the harder it became to accept that it was a natural phenomenon. It was elegant, delicate. There was an architecture to it. And it wasn’t moving. Because of this I was compelled to buy a disposable camera and wait at the little “last chance” gas station at the foot of the mountain until sunset rolled around and started throwing wild colors of light onto the…the…

“They’re called ‘plate clouds,'” said a waitress who stepped out of the diner to smoke. She’d seen it once before, in the same spot, about the same shape, “but not as big a deal as this time.” She didn’t know how they were formed, or why they stayed frozen like that for so long, making the illusion of solidity so eerily real.

Giant Lentils in the Sky

Lenticularis (from the same root word that gives us “lentil”), or “lenticular clouds,” are a cloud species occasionally found over mountain peaks, or on the leeward side of a mountain. As wind forces air up one side of a mountain, the air cools, and the moisture within that air condenses into visible drops. As soon as the air begins to descend down the other side of the mountain the moisture in the air warms, and is no longer visible. What appears to be a stationary cloud is actually the condensation point of a constantly moving stream of air, and the layers within the apparent cloud represent “waves” within the stream. It doesn’t happen all the time, or even often.

It happens, for example, when the upper air is stable, meaning lenticular clouds are a good indication that it’s not about to rain. But the event can grow. Altocumulus lenticularis (the formation that I saw), an already unusual occurrence, can grow into the legitimately rare Stratocumulus lenticularis, whose elements are larger yet, and must either be so spectacular as to stop hearts within a hundred-mile radius, or actually be so large that they cover the sky and thus go unnoticed.

Other rare cousins in the sky lentil family are those lenticular clouds that form absent any orographic features (mountains). Large bodies of ice surrounded by warmer ground can cause the same mysterious, unmoving “stack of pancakes” formations, though they will not have the intriguing concave underside, caused by the updraft from the mountain, that made mine so artificial-looking. Lenticularis is also the species of cloud known for “irisation,” an effect of iridescence at the sharp edges of the “plates.” I don’t recall having noticed this quality in the formation I saw.

Of course, I might just be inadvertently continuing the grand cover-up, by describing these as meteorological events with plausible causes. Maybe they really are alien spacecraft. Either way, I’m keeping a camera in my car from now on.

Guest author Bill Bain is a painter and commercial illustrator who, having toured the world, has correctly chosen San Francisco as the place to live.

Note: This is an updated version of an article that originally appeared on Interesting Thing of the Day on March 28, 2005.