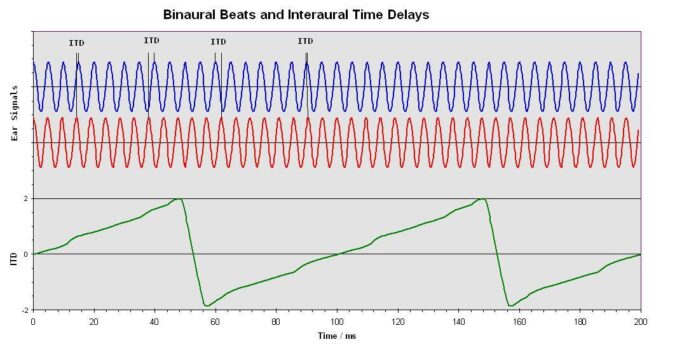 Regular readers may recall an article here about brain machines—electronic devices that use flashing lights to promote relaxation. The idea behind these machines is that brainwaves have a tendency to fall in step with stimuli of certain frequencies—a phenomenon known as entrainment. So by flashing lights at the same frequency as one’s brainwaves would have during, say, deep meditation, a machine should be able to induce a meditative state artificially. It’s a fascinating concept, and there are numerous gadgets that use light alone, or sound and light together, to induce sleep, improve learning and creativity, and perform any number of other feats.

In the course of my research for that article, I noticed that there were also products that claimed to produce exactly the same effect using sound alone. Somewhat skeptical, I put on some headphones and listened to one of the sample recordings. The next thing I knew, I was waking up, wiping the drool from my keyboard. A half hour had gone by and I never knew what hit me. Whatever happened, the effect was as surprising as it was impressive.

I decided to investigate further. There are, it turns out, quite a few different companies selling downloadable audio files, CDs, and electronic gadgets based on the basic notion of binaural beats. Although they come in many different forms and have different claims, they all exploit an interesting quality of the brain.

If you were to listen to two musical instruments playing the same note, but slightly out of tune with each other, you may perceive a sort of warbling or vibrato effect. These cyclic pulsations are called beats, and within a small range of tunings, they get faster the farther apart the two notes are. (If the instruments are perfectly in tune, the effect is absent, and if they’re really far out of tune, then you simply hear two different notes.) It turns out that you can get exactly the same effect if you play a tone in one ear and a very slightly lower- or higher-pitched tone in the other ear. Listen to either sound individually, and it sounds normal—but listen to both together and you perceive the beats. In other words, this effect is not an acoustic one, but is produced by the brain.

The human auditory apparatus can hear sounds with a pitch as low as about 20Hz (Hertz = cycles per second), give or take a few Hertz. However, the frequency of brainwaves—particularly those associated with states of relaxation and sleep—can go much lower, even below 1Hz. So a recording of a sound at, say, 4Hz would be inaudible and would have no effect. However, if you pitch two sounds exactly 4Hz apart (say, one at 100Hz and the other at 104Hz) and play one in each ear, the brain “manufactures” a 4Hz beat. And, all things being equal, the brain will then strongly tend to fall into sync with that frequency, producing the same sort of subjective sensation as sleep. Conveniently, the range of frequency differences that can produce an audible beat corresponds roughly to the range of frequencies dominant in the brain during the sorts of relaxed states most of us enjoy.

Of course, plain out-of-tune tones aren’t especially interesting to listen to, so most publishers of binaural beat recordings mix in other sounds such as rain, waterfalls, bells, gongs, and so on. In some cases, these extra sounds completely hide the beats so that the listener is unaware of them consciously, but they still register in the brain and have the same effect.

It’s not at all difficult to record these sounds in an MP3 file or on a CD—perhaps in a progression from faster to slower beats—and numerous companies do. There are also mobile and web apps that do the same thing. These recordings and apps are billed as aids for meditation, relaxation, or self-hypnosis—and even as a legal “digital drug.” The prices range from almost nothing to thousands of dollars for a multi-year program of customized recordings. Although each company puts a unique spin on its particular method or formula, it’s virtually impossible to make fair comparisons because what you have to judge is ultimately a subjective experience. That US$15 recording might produce an effect that, for you, is just as good as what you’d get by spending several hundred dollars—then again, it might not. It’s reasonable to expect better and more reliable results from larger companies that employ neuroscientists and psychologists and do actual testing of their products’ effects on human brainwave patterns.

I have invested only a little time—and no money—into a few limited experiments on myself with binaural beats. My results have been modest at best—perhaps I get what I pay for. Still, my experience suggests that this technology has a lot of potential. And it’s certainly a lot less goofy-looking than sunglasses with blinking LEDs mounted on the inside. So the next time you see someone on the train wearing headphones and apparently zoned out, remember: you might be looking at a great spiritual master in training.

Note: This is an updated version of an article that originally appeared on Interesting Thing of the Day on October 13, 2004.