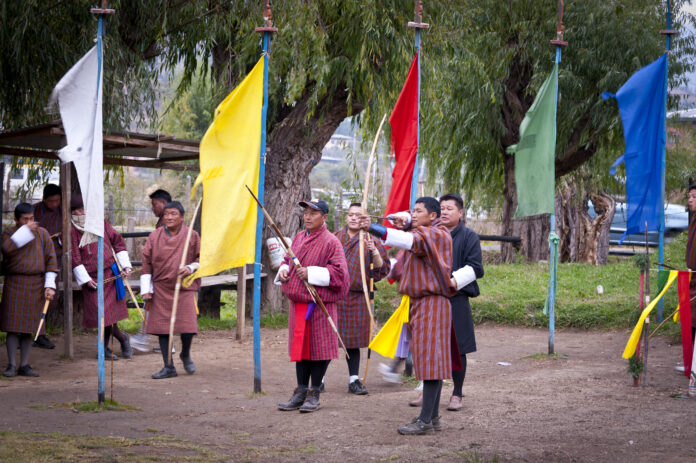 One day Morgen and I were having a brainstorming session about interesting things related to the theme “hit or miss.” As we began talking about things that involve hits and misses. Morgen said, “Do you know what the national sport in Bhutan is?” I was embarrassed to admit I did not even know exactly where Bhutan is located; it’s simply not a place I’ve ever spent much time thinking about. Morgen told me that Bhutan is between China and India. Although this didn’t give me any strong clues, I made what I thought was a safe guess: soccer. That turned out to be a particularly bad guess, because Bhutan’s national soccer team is nearly always among the lowest-ranked in the world. In 2002, it was ranked 202 out of 203 worldwide; FIFA sanctioned a special match that year, at the same time as the World Cup finals, between Bhutan and 203rd-ranked Montserrat; the match was covered in a documentary film called The Other Final. (Bhutan’s soccer ranking has since risen all the way to 186—go, team!)

In fact, Bhutan’s national sport is archery. That fact alone, I think, qualifies as an Interesting Thing, but there’s more to the story.

Bhutan is a Buddhist nation, and one of the central precepts of Buddhism is a reverence for all life. So it seems somewhat incongruous that the nation’s favorite game involves a hunting instrument (or, depending on how you look at it, a weapon of war). But in Bhutan, the bow and arrow can be used only for play. In fact, when making arrows, one can use only feathers that were found on the ground; killing a bird to obtain its feathers would be considered wrong.

Each village has its own archery range, making them as common as curling rinks in Canada. (That is to say, extremely common.) Although modern, high-tech equipment is making some headway, most competitors use traditional, hand-carved bamboo bows and arrows. Village teams compete against each other in rowdy, elaborate, alcohol-fueled, multi-day tournaments that are as much about spectacle as they are about hitting a target. Archers can use almost any means at their disposal to distract or demoralize their opponents, including dancing in front of the targets. A major part of the sport goes on behind the scenes, as teams conspire to throw off their opponents’ game. It is this, rather than what I typically think of as team interaction, that gives Bhutanese archery such popularity.

The Wide World of Archery

You might imagine that since archery is the national pastime, Bhutanese archers would be world-renowned for their skills. So far, however, the country has not distinguished itself in international competition beyond Asia. Until 2012, archery was the only Olympic sport in which Bhutan participated (now they also compete in the women’s 10m air-rifle event), and they have been sending their best archers to the Olympics since 1984. But the country has never received a single Olympic medal. This is largely due to the fact that traditional Bhutanese archery is much different in both equipment and style from Olympic archery—insulting your opponent during Olympic competition is, shall we say, bad form. But Bhutan remains optimistic that their athletes will eventually earn recognition as the world’s finest archers.

I’ve tried archery only a couple of times, and I found it a lot harder than I’d imagined. And in America, at least, I would consider it rather unsafe to taunt someone who’s pointing a deadly weapon in my general direction. All the same, I think I could get behind a national sport that is as much about fun and mischief as about skill.

Note: This is an updated version of an article that originally appeared on Interesting Thing of the Day on December 25, 2004.