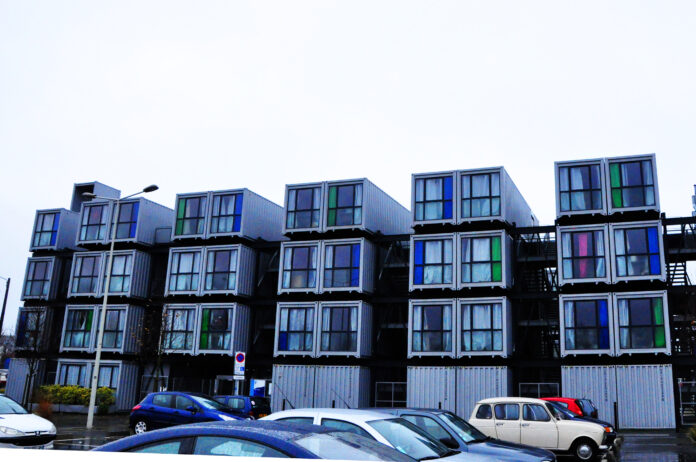 When I lived in San Francisco I saw cargo shipping containers in use fairly regularly—sometimes being hoisted by cranes in the busy Port of Oakland, other times filling the decks of gigantic freighters passing through the Golden Gate. They were such a common sight that I almost stopped noticing them, although if I did, they made me think of the immense scale of the global economy, and provoked curiosity about what kind of goods they might be carrying. I didn’t think of shipping containers themselves as very interesting. But for the past few decades, many architects and builders have looked at shipping containers as not only a means to transport goods, but as a source of building material. Whether intended for private homes, schools, markets, or multi-unit complexes, repurposed shipping containers have become a unique way to bring exciting design and environmental concern into everyday life.

The use of modern shipping containers first developed in the mid-fifties in Denmark, Canada, and the United States. These containers soon became invaluable, as their use streamlined the transportation of goods between ports and inland destinations via railroad cars and large trucks. They were created to be easily stackable and made sturdy to withstand wind and water, and these same attributes are what make shipping containers so attractive to architects and builders.

In addition to their sturdiness and flexibility, shipping containers have other benefits. Designers looking for more environmentally friendly construction methods can practice recycling by using decommissioned containers from shipping companies. These containers are also much cheaper than standard building materials (sometimes by as much as half), and with their use, buildings can be assembled in much less time, with lower labor costs.

Another advantage to shipping containers is that they are easy to transport, having been designed expressly for that purpose. This can facilitate their use in disaster situations, allowing repurposed containers to arrive quickly in areas where temporary housing is desperately needed. It also means that containers can be worked on in one location, and then easily transferred to the actual building site in another area when needed.

While building with shipping containers may make economic and environmental sense, who would want to live or work in a windowless metal box? Designers have gotten around this limitation in a variety of ways, most notably by incorporating containers into larger construction projects, cutting and shaping the existing containers as necessary. Some of the first and most well-known projects of this kind were built by the Container City company in London. Container City I is located at Trinity Buoy Wharf in London’s Docklands district, and comprises 12 work studios and three live/work apartments. Amazingly, it only took two days to install in 2001 (after being built off-site for five months), and 80% of it is made from recycled material. Following the success of Container City I, Container City II was built adjacent to it in 2002. Notable for its ziggurat shape and bright colors, Container City II hosts 22 studios on five floors. Container City now offers their services on other projects such as schools and office buildings, taking these projects from feasibility studies, through design, fabrication, and installation.

Because of the growing interest in container homes, there are now numerous companies selling pre-made container homes, ready to be delivered and installed at your chosen location. These usually consist of one or two containers, but there are many different configurations that are possible. You can see some current options on the Curbed and Dwell websites, including one house that you can order from Amazon.

With its economic, environmental, logistical, and practical benefits, shipping container architecture provides a compelling alternative to conventional building methods, and seems poised to continue to gain in popularity in the coming years.

Note: This is an updated version of an article that originally appeared on Interesting Thing of the Day on May 21, 2007.