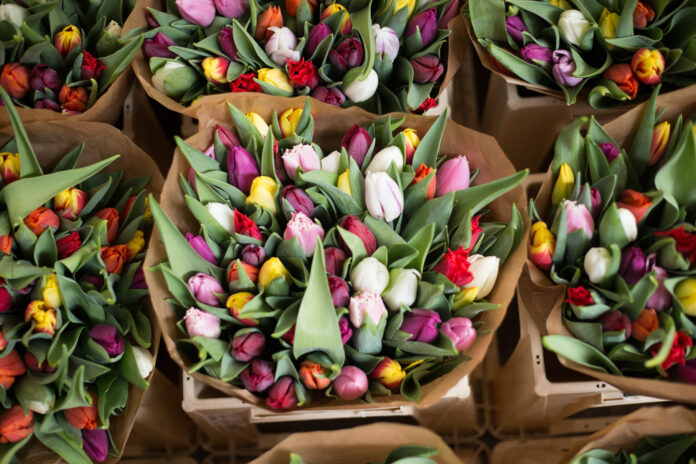 In his 1850 novel The Black Tulip, French author Alexandre Dumas (père) describes a competition, initiated by the Dutch city of Haarlem in the 1670s, in which 100,000 florins (150 florins being the average yearly income at the time) would be given to the first person who could grow a black tulip. Although Dumas’s story is fictional, it is based on a real phenomenon that took place in the Netherlands in the early 17th century.

Between 1634 and 1637, the Netherlands (then called the United Provinces) saw the rise and fall of many fortunes due to an intense period of tulip trading. Now described as tulipomania, or simply tulip mania, it involved the wild overvaluation of certain types of tulip, leading to the eventual crash of the inflated market.

First cultivated in the East, tulips were brought to Europe from the Ottoman Empire during the 16th century (the name tulip is derived from the Turkish word for turban). Soon after their introduction, tulips became popular in various countries, but nowhere so much as in the Netherlands. There are many theories as to why the Dutch developed such an avid interest in tulips; in his book The Botany of Desire, Michael Pollan suggests that the bleakness of the Dutch landscape may be one reason colorful tulips were so quickly embraced. He observes that “what beauty there is in the Netherlands is largely the result of human effort…” making the cultivation of beautiful blooms an attractive pastime.

Another reason for their popularity was their relative rarity. While tulips can be grown simply from seed, there is no guarantee that the resulting flowers will resemble their parent plants at all. The only way to obtain a particularly prized bloom is to grow one from an offset, which Pollan describes as “the little, genetically identical bulblets” found at the base of a tulip bulb. The process of cultivating offsets was a lengthy one, adding to the scarcity of tulips. In addition, the most valued tulips of the time were ones said to be “broken,” that is those tulips with bright flame or feather-like patterns on their petals. The most famous of this type of tulip was the Semper Augustus, a white flower marked by brilliant red strokes. These tulips produced fewer offsets, making them even rarer; although it was not known at the time, the “broken” effect was caused by a virus that weakened the plant.

The genesis of tulipomania is usually ascribed to the 1593 arrival in Leiden of Carolus Clusius, a plant collector and gardener. Bringing with him some tulip bulbs he had acquired while working as the director of the Imperial Botanical Garden in Vienna, Clusius proceeded to cultivate beautiful specimens from them, attracting attention from his new neighbors. However, Clusius was reluctant to part with his bulbs, refusing to sell to eager buyers. Frustrated by his refusal, thieves helped themselves to his garden, stealing many bulbs and selling the seeds they gained from them. These seeds were eventually distributed throughout all the Dutch territories, leading to the increased propagation and variation of tulips. Those lucky enough to grow a particularly beautiful bloom from seed could profit greatly from the sale of its offsets, making tulip cultivation an increasingly lucrative vocation.

As the taste for certain types of tulip became more focused, prices for the most valued bulbs rose dramatically among the upper classes. At first limited to collectors and the wealthy, the large amounts of money to be made soon inspired people of more limited means to sell everything they had to cash in on the trade. At the market’s highest point, single bulbs sold for thousands of florins, the most famous being a Semper Augustus bulb that sold for 6,000 florins (or 40 times the average yearly income).

As more people entered the trade, eventually the sale of real bulbs gave way to windhandel, or wind trade, meaning the future production of bulbs was bought and sold. This increasingly risky venture couldn’t last. The tulip bubble burst in February 1637 when the fear of oversupply and dramatic price increases in early 1637 caused prices to drop precipitously.

While the story of tulip mania often gets told as a cautionary tale and as an analogue to more modern forms of market inflation and decline, such as the dotcom bubble, historian Anne Goldgar thinks this description is overblown. In her book, Tulipmania: Money, Honor and Knowledge in the Dutch Golden Age, Goldgar finds that tulip speculation in reality was not as frenzied as the way it is commonly portrayed. She blames the writer Charles Mackay, whose book Extraordinary Popular Delusions and the Madness of Crowds from 1841 used satirical songs from 1637 as the basis for his depiction of the craze for tulips, which had a tendency to exaggerate the facts of the situation. Far from being irrational, Goldgar argues that there were valid reasons for treating tulips as a valuable commodity, and that the subsequent rise and fall of the market was not as precipitous, and did not personally bankrupt, hordes of unlucky investors.

Although this volatility in the tulip market was unsettling at the time, out of that early trade came an enduring business for the Netherlands. Now the tulip is a beloved symbol of the country, and plays an important role in economic and cultural activities. It seems unlikely that anyone at the time the tulip came to the Netherlands could have predicted the enormous effect this flower would have over a nation’s history and economy. It is a vivid reminder that when human nature meets Mother Nature, interesting results are sure to follow.

Note: This is an updated version of an article that originally appeared on Interesting Thing of the Day on April 6, 2007.