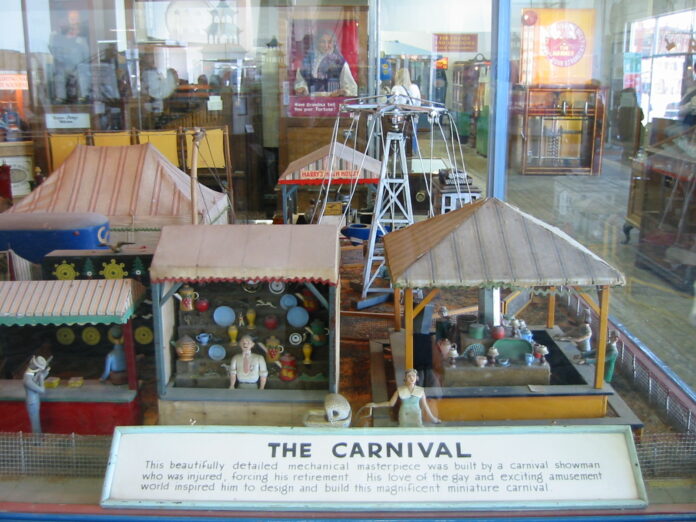 Fog, as I have said for many years, is my all-time favorite weather condition. Other than its impact on driving, I like everything about fog—the coolness, the dampness, the way it muffles sounds, and especially the mysterious, spooky quality it gives its surroundings. So the first time I took a streetcar out to San Francisco’s Ocean Beach many years ago, I was delighted to discover that, more often than not, the entire area is covered with fog. Morgen and I walked along the beach and up a hill to a building called the Cliff House, a restaurant with a majestic, sweeping view of the mist—and, occasionally, bits of the ocean and nearby Seal Rock. The Cliff House is a favorite tourist destination—not so much for the food but for the view, the gift shops, and a few other attractions nearby. The attraction we had gone there to see was located inconspicuously around the back, downstairs in the basement of the Cliff House—and advertised only by a small, folding wooden sign on the sidewalk near the restaurant that said, simply, “Musée Mécanique.”

The Old Machine and the Sea

The Musée Mécanique (or Mechanical Museum) looked like something that belonged a century in the past—an effect enhanced considerably by the fog. Inside a large room with peeling paint and a crumbling ceiling was a collection of hundreds of very old mechanical toys, games, and other amusements. For example, there were dozens of automatons—machines in which small figures walk, dance, or otherwise move around when you insert a coin. There were fortune-telling machines, games to test your strength (the electric arm-wrestling machine was frighteningly strong), flip-card “movies,” a player piano, and all sorts of other mechanical shows and diversions. The amazing thing was that all these machines—ranging from the very campy to the very sophisticated—were fully functional. Admission was free, but nearly every machine required a quarter (or two) to operate it.

The money was well worth it, though: you just can’t get this kind of entertainment anymore. In the days before electronic toys and games, designers accomplished some impressive feats of engineering and miniaturization using simple motors, gears, levers, and springs. The result was an arcade that, while lacking video screens and digital controllers, was much more interesting and engaging than a modern gaming venue. The point of dropping in your change was not, in general, to win anything; it was simply to marvel at the skills of the machines’ designers.

The March of Quarters

The Musée Mécanique houses some of the last remnants of an amusement park called Playland at the Beach, which operated along San Francisco’s oceanfront from 1928 to 1972. When the park closed, a collector named Edward Zelinsky purchased its mechanical games from owner George Whitney, Jr. Zelinsky had already been collecting antique gadgets of this sort for decades, and had taught himself how to repair and maintain them. Shortly after acquiring the Playland machines, he put the bulk of his collection on public display in the basement of the Cliff House. He kept it going as a labor of love until his death in 2004, but his son, Dan, continues the work. The Musée Mécanique is now the world’s largest private collection of antique coin-operated arcade machines, and other than being updated to use quarters rather than the original pennies or nickels, the machines have kept all their original charm.

Returning to the Musée in early 2002, I saw a sign on the window that troubled me. It said the museum was likely to close permanently within a few months. I talked with the manager about it, and then a few weeks later, read a more detailed account in a local newspaper. The story was that the building, which is managed by the National Park Service, was badly in need of renovation. Following the repairs, the park service wanted to put a more profitable business in the spot where the Musée had been. They hoped to construct a new building nearby at some point in the future that could house the Musée’s collection, but there were no funds at the time for such a building, and in any case, there was no other space available for the Musée in the meantime. Left with no home for the machines, Zelinsky was considering whether to put the collection into storage indefinitely or simply auction it off.

The Musée Lives On

When the newspaper article was published, public outcry was immediate and overwhelming. Within a couple of weeks, more than 20,000 people had signed petitions asking the park service to save the Musée—to assure it a temporary home, as well as permanent housing after the Cliff House renovations were complete. Shortly thereafter, a follow-up article reported the good news: the park service had assured the owners that they would find a way to keep the Musée open. The Musée Mécanique is currently housed at Pier 45 on San Francisco’s Fisherman’s Wharf. The original plan had been for it to return to new digs at or near the Cliff House in 2004, but that never happened, and I suspect that the museum’s current home will be more or less permanent.

The Fisherman’s Wharf location lacks the dilapidated charm of the Cliff House basement and is not nearly as foggy. On the bright side, it’s right in the thick of the city’s most densely touristy area, so it’s bound to attract more visitors. Admission is still free, but take a roll of quarters for a great value in entertainment—and nostalgia.

Note: This is an updated version of an article that originally appeared on Interesting Thing of the Day on June 9, 2003, and again in a slightly revised form on November 4, 2004.