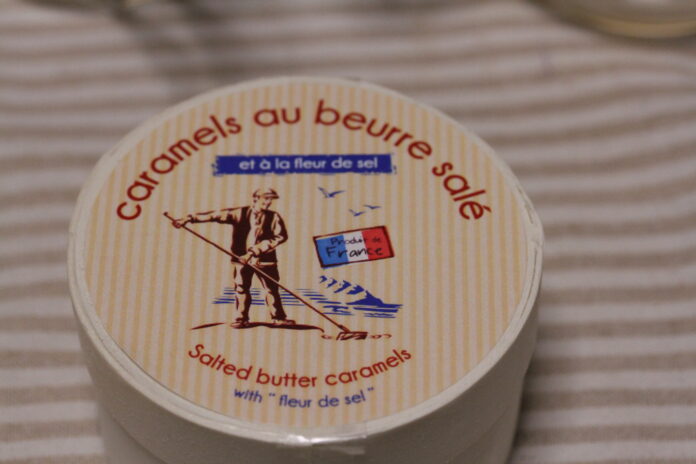 For the health-conscious, salt and butter are very high on the list of dietary no-no’s, although in recent years butter’s reputation has slightly improved (while margarine has become less well-thought of). And as Mark Kurlansky detailed in his fascinating book Salt: A World History, salt has played an important role in human society and is even necessary (in a certain amount) to the healthy functioning of our bodies.

But just because we crave something doesn’t mean it’s healthy to have it in copious quantities, no matter how tempting it seems. Years ago, I ran across a blog post by professional chef and author David Lebovitz that made me aware of the tastiest combination of this “evil” duo: creamy butter laced and studded with large crystals of salt. This tempting concoction was beurre salé (literally, “salted butter”), a regional specialty from the Brittany region of France, and the sight of it made me want to eat copious quantities of it, health concerns notwithstanding.

So what makes this salted butter different from the kind you can buy at the local supermarket? For one thing, it’s made with Brittany sea salt, some of the finest produced anywhere. Brittany is located in the northwest corner of France (south of Normandy) and its lengthy ocean coastline is a perfect place for cultivating salt. Its most famous type of salt, fleur de sel, comes from the town of Guérande (which was historically part of Brittany, but is now part of the Pays de Loire region), and is world-renowned for its texture and flavor.

Having such ready access to salt, Breton cuisine developed to take advantage of this situation. Whereas in most other regions of France there are dozens, if not hundreds, of types of cheese specific to that region, there is not even a word for cheese in the Breton language. There are a few cheeses to be found in the region, but less-processed dairy products (butter and cream) are much more prevalent in the Breton cuisine. The reason is that before the advent of refrigeration, making milk into cheese was more effective against spoilage than making butter—that is, unless you had plenty of salt.

Salt has historically been used as a preservative; that is a large part of why it has been so coveted throughout human history. In the case of butter, this was especially so, since butter has a tendency to quickly go rancid when it is exposed to air. Refrigeration has taken care of this problem for modern butter-eaters (and the invention of a water-sealed butter dish helped too), but it was a serious problem for our ancestors. According to Margaret Visser’s delightful book Much Depends on Dinner (which includes individual chapters on butter and salt), butter that has been oxidized (exposed to the air) can cause “diarrhoea, poor growth, loss of hair, skin lesions, anorexia, emaciation and intestinal haemorrhages.”

Mixing butter with salt, or storing it in brine, was a way to prevent butter from going rancid, and was commonly done before the days of refrigeration. Indeed, a record from 1305 CE noted that one pound of salt was added to every ten pounds of butter or cheese. To remove some of the salt, people had to rinse the butter by kneading water into it, and then squeezing it out again along with some of the salt.

No longer a necessity, beurre salé is today a gourmet treat; it is used in many traditional Breton dishes, and is coveted for its delicious effect on everything from fine chocolates to buttery cakes. It may seem counterintuitive, but salt can be as important as sugar in many dessert recipes, and lends an interesting counterpoint to the sweetness.

Traditional Breton desserts made using beurre salé include: gâteaux Breton, a type of poundcake made with flour, butter, sugar, and eggs; palets Bretons, small buttery cakes; and caramel au beurre salé, which can refer to individual candies (salted caramels) or the process of caramelizing sugar and salted butter while baking a dessert, such as Kouign Amann. Amann is the Breton word for butter, and this cake is made with plenty of it, along with yeast, sugar, flour, and water.

Since the time I wrote the first version of this article in 2006, salted caramel (inspired by caramel au beurre salé) has become much more popular in North America; it seems everywhere you look these days the salted caramel flavor is popping up, from popcorn and hot chocolate, to cookies and coffee drinks. And since this article was first written, I have personally tried beurre salé in its birthplace, on several trips to Brittany, and have loved every bite, whether slathered on a baguette or baked in a Kouign Amann. And while living in Paris in the late 2000s, I also had the pleasure of meeting and befriending David Lebovitz and Margaret Visser, both originally cited in this article. It was an unexpected delight, much like finding crystals of briny sea salt in the midst of delicious and creamy butter.

Note: This is an updated version of an article that originally appeared on Interesting Thing of the Day on July 31, 2006.