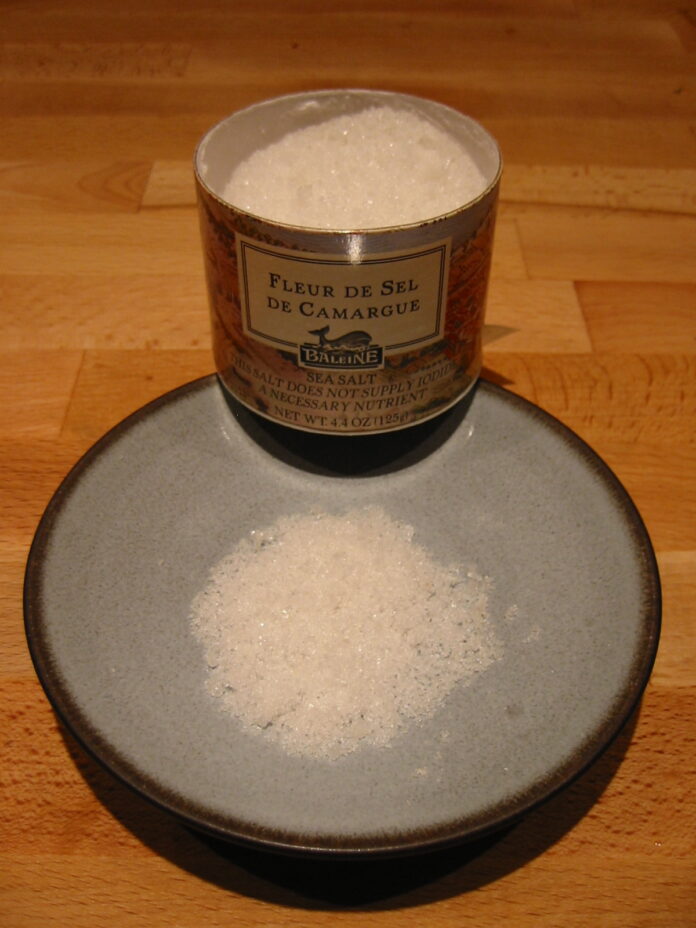 In general, I don’t have very expensive tastes. My home is furnished mostly in low-end IKEA, and I rarely wear anything fancier than jeans and a T-shirt. When it comes to food, though, there are some exceptions to this rule. Although I don’t usually eat like a gourmet, I do take my coffee and cheese pretty seriously, and I like to sample, at least, foods that are rare and unusual—if also somewhat pricey. So my pantry does include a container of one of the world’s most expensive kinds of salt: fleur de sel (French for “flower of salt”).

Fleur de sel is a type of sea salt produced in several temperate coastal areas around the world—but particularly in France. Within France, the region best known for its fleur de sel is Brittany (in the northwest corner of the country, across the English Channel from Great Britain), and more specifically the town of Guérande. The Camargue region on the south coast is also a top producer, and its fleur de sel is a little cheaper and less desirable, supposedly because of the presence of nuclear reactors nearby.

As salt goes, sea salt is fairly expensive, and as sea salt goes, fleur de sel is quite expensive. Whereas you might pay less than US$1.00 for a pound (about 0.5kg) of plain table salt, fleur de sel can easily cost $25 or more per pound. At 25 times the cost of table salt and 10 times the cost of ordinary sea salt, it’s probably not something you’d want to use for everyday cooking. Fleur de sel is not just any sea salt, though; it owes its price to a very special method of collection, about which more in a moment.

But let me take a brief detour to talk about sea salt in general, which is increasingly popular in recipes and on store shelves. Why all the fuss? Well, apart from having a coarser texture, which some people prefer, sea salt has a much higher content of other minerals besides sodium chloride. It is, after all, produced by evaporating seawater, which contains a bit of pretty much everything. And the little bits of other stuff, apparently, enhance the flavor. Call me crazy, but I can’t help thinking twice about all those seemingly innocent little extra minerals. Do you know where this ocean has been? A lot of things live (and die) in the ocean, and a lot of waste of every imaginable kind gets dumped there—such as all the sewage from the city of Venice, just to pick a random example. It makes me wonder—in passing—whether this is something I really want to put in my mouth.

To get fleur de sel, salt farmers living along the coast allow shallow pools to fill with fresh salt water. As the water evaporates, a thin layer of salt crystals forms on the surface, but the slightest breeze will cause them to sink, and they pick up a grayish color from the clay and minerals at the bottom of the pool. The resulting salt, called Sel Gris, is highly regarded, but there’s something even better. On a clear and sunny summer day with no wind, the salt layer remains floating on the surface, and is harvested by skimming it off with a rakelike implement at the end of the day. Voilà: fleur de sel. Because conditions must be just right for fleur de sel to form, the yield is only about one pound for every 80 pounds of Sel Gris.

Fleur de wel is composed of irregularly shaped grains of salt that are slightly moist and form flaky clumps. This gives it a much different texture from ordinary salt. It’s crunchy and perhaps slightly less salty than ordinary salt—if that makes any sense. Personally, I can’t detect any other flavors, though some people swear it has the aroma of violets. It is almost always used as a garnish just before food is served; once the salt is dissolved and mixes with other flavors, the difference is even harder to detect. My cynical side says that the real reason for sprinkling fleur de sel on a dish at the table is to show off, but then, I’m no authority on such matters.

In any case, I think of fleur de sel as the Kopi Luwak of salt—that is, slightly superior in taste to the ordinary varieties, but not to the extent suggested by its price. Then again, you can buy it in a small container for less than $10. Perhaps it’s just the thing for expensive tastes on a budget.

Note: This is an updated version of an article that originally appeared on Interesting Thing of the Day on July 13, 2003, and again in a slightly revised form on November 30, 2004.