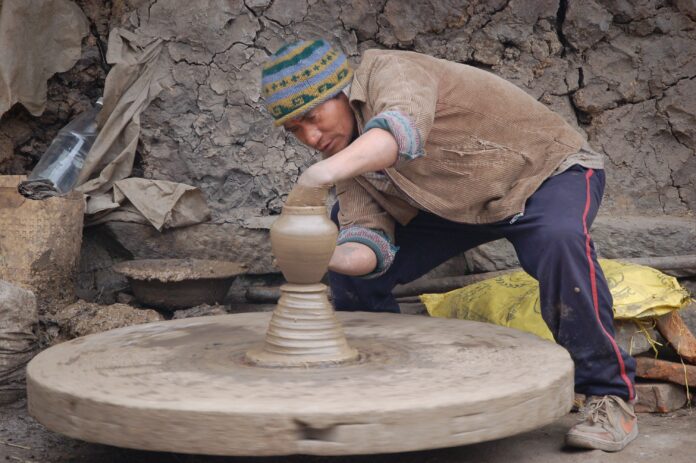 On occasion, you may have heard it said of some wonderful gadget, “This is the greatest invention since sliced bread!” Such a comment is intended to be both a compliment and a reference to how revolutionary and world-changing the invention is. It’s worth bearing in mind, though, that while people have been slicing bread for eons, pre-sliced, packaged bread has been available only since 1928, when Otto Frederick Rohwedder introduced the world’s first mechanical bread slicer in Battle Creek, Michigan. I don’t know what revolutionary invention the bread-slicer was compared to when it first appeared, but sooner or later, it all goes back to the wheel. Nobody seems to be able to come up with an older, or more important, invention than that.

Giving It a Spin

Before I began my curatorial duties here at Interesting Thing of the Day, I had never really wondered when the wheel was invented, much less why it was invented. That’s obvious, isn’t it? Everyone knows the wheel was invented to enable people to move stuff around more easily—a revolutionary alternative (so to speak) to carrying, pushing, or dragging heavy objects. Surprisingly enough, some historians and archeologists aren’t so sure about that. There is in fact a fairly good case for the hypothesis that the wheel was invented to facilitate pottery making.

The wheel was almost certainly invented in Mesopotamia—present-day Iraq. Estimates on when this may have occurred range from 5500 to 3000 BCE The oldest wooden wheel discovered so far (in Slovenia, not in Mesopotamia) dates to about 3150 BCE, though for all anyone knows, wheels were already in use in various places for centuries by that point. But there is also evidence from the very same period of time that wheels were used for pottery.

It was around 3000 BCE that the first goblets appeared. Clay goblets, along with bowls and other vessels, are normally made by throwing them on a wheel. This makes for a far smoother and more regular shape than could be achieved by manual coiling, and since the oldest surviving goblets bear the telltale signs of wheel manufacture, it is plausible that wheels were used for pottery before they were used for transportation.

If the wheel was indeed invented for the convenience of potters, the question then becomes how it came to be used for transportation; clearly, whichever use appeared first, the other quickly followed. To be honest—putting myself as best I can into the sandals of someone living many thousands of years ago in Mesopotamia—I probably never would have thought to turn a pottery wheel on its edge and put it under a box (or vice versa). But then, I’ve always had a knack for overlooking the obvious.

This story also has an interesting postscript. Some sources claim that prior to the invention of the pottery wheel, most pottery was primarily made by women, whereas afterward, it became a man’s job. Thus we can see that the stereotypical male trait of liking gadgets goes way back. I can just picture those prehistoric dudes standing around bragging about their new wheels and saying, “This is the greatest invention since fire!”

Note: This is an updated version of an article that originally appeared on Interesting Thing of the Day on September 26, 2003, and again in a slightly revised form on December 30, 2004.