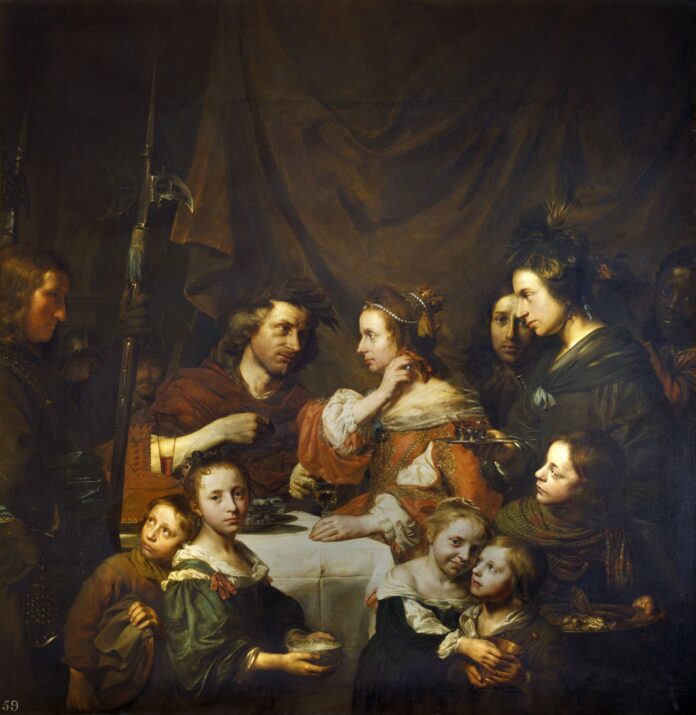 A 2005 news article mentioned a hotel bar in New York whose drink menu included a US$10,000 drink called “Martini on the Rock.” That worked out to about $5 for the gin, vermouth, and olives—and $9,995 for the loose diamond sitting at the bottom of the glass. Patrons had to order the drink three days in advance, and meet with a jeweler to pick out the perfect stone. The first person to order this drink paid a bit extra—$13,000—and instead of a loose stone, selected a 1.85-carat diamond engagement ring. (His girlfriend said yes.) Perhaps unknown to the hotel’s proprietors, this extravagant beverage has a fascinating historical precedent. Although we can’t know for sure that the story in question is true, it absolutely could have happened.

The year was 41 BCE. Mark Antony, one of the rulers of Rome, summoned Egyptian queen Cleopatra VII for an audience at Tarsus (in present-day Turkey). Antony ostensibly wanted Cleopatra to answer charges that she had aided Cassius, who had conspired with Brutus to assassinate Julius Caesar. But most people believe the real reason for the meeting was that Antony wanted Egyptian aid for an upcoming military campaign, and besides, he had the hots for Cleopatra.

Cleopatra arrived on her legendary barge and proceeded to throw elaborate banquets for Antony and his officials for several evenings straight—nothing like a bit of wining and dining to smooth over political misunderstandings. So impressed was Antony at the lavish feasts Cleopatra had arranged that he accepted a friendly wager. Cleopatra bet Antony a large sum of money that she could host the most expensive meal in history. The next day, as the meal in question was nearing its end, Antony said that it had been terrific, but no more impressive than her other banquets—and certainly not worth the sum of money she had specified. At this, Cleopatra removed one of her pearl earrings and dropped it in a goblet of wine vinegar. Each of the pearls was so large and rare that it was extraordinarily valuable—estimates are usually expressed in extremely helpful terms such as “10,000,000 sesterces” or “100,000 gold aurei,” or “the value of 15 countries.” In any event, it was worth a fortune. The pearl dissolved in the vinegar, which Cleopatra then drank. Antony conceded defeat—the value of that single drink, let alone the banquet, had indeed been more than any meal in history.

I’ve Got a Crush on You

There are a number of different versions of this story, which originally appeared in Pliny the Elder’s Natural History. According to some versions, Cleopatra ground the pearl in a mortar before dropping it in the vinegar. That would have been a wise choice. Pearls, which are made primarily of calcium carbonate (the same material that forms stalactites, stalagmites, and tufa), will indeed dissolve in a mild acid such as vinegar, neutralizing the acid in the process. (This is how antacids work, by the way—check the label on a bottle of Tums and you’ll see that its main ingredient is also calcium carbonate.) However, this might take days for a whole pearl; a crushed pearl could dissolve in a matter of minutes.

Not only did Cleopatra win the wager, she won Mark Antony’s heart. Antony left his wife and moved to Alexandria. But ten years later, Octavius led Rome in a war against Egypt. He defeated Antony and Cleopatra, both of whom committed suicide shortly thereafter. Meanwhile, according to legend, the pearl from Cleopatra’s other earring was later cut in two, with each half being placed in one of the ears of the statue of Venus in Rome. Rome burned, of course, soon thereafter. Coincidence? Probably, but all the same, I recommend against sticking antacids in your ears.

Note: This is an updated version of an article that originally appeared on Interesting Thing of the Day on September 27, 2003, and again in a slightly revised form on December 31, 2004.