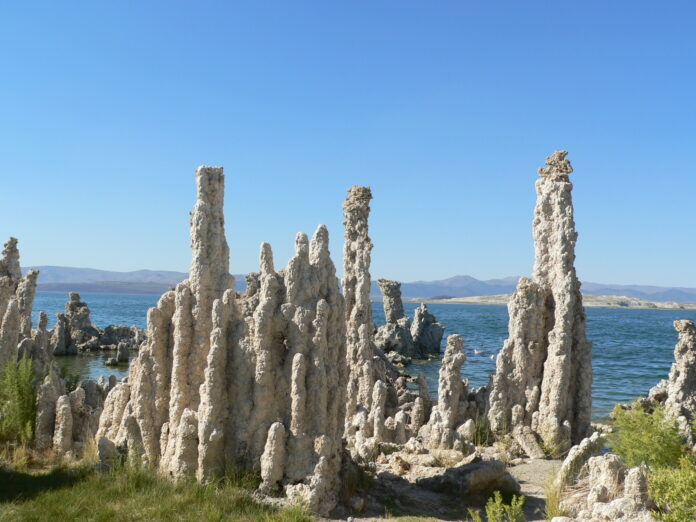 In the Sierra Nevada mountains in northeastern California, about a half hour’s drive from the legendary ghost town of Bodie, lies scenic Mono Lake. (Mono rhymes with “phono,” by the way. I could tell you were wondering.) It’s a large lake, with about twice the area of San Francisco—and impressively beautiful when viewed from the surrounding mountains. Up close, however, you discover that there’s both more and less to Mono Lake than meets the eye.

Mono Lake is a “dead” lake, meaning it has inlets but no outlets. As a result, the lake has accumulated an extremely high concentration of salts and minerals, which become even more concentrated as the water evaporates. It’s now almost three times saltier than the ocean and 80 times as alkaline. Because of the lake’s high pH level, only brine shrimp and algae can survive in the water. But tourists don’t flock to Mono Lake to see the shrimp; they go to see the tufa (pronounced “too-fah”), the strange rock formations rising from the lake and scattered along the shore.

Caves Without the Cave

The tufa at Mono Lake are tower-like formations that are often described as “otherworldly.” In fact, they look pretty much like giant stalagmites—some as tall as 30 feet (9m). They would look right at home in a deep, damp cave somewhere, but they are not the sort of thing you expect to see sticking out of a lake.

It’s no coincidence that tufa towers look like stalagmites; they’re made of exactly the same material, calcium carbonate (commonly known as limestone). But they have a different texture, a spongy interior, and most importantly, a different method of forming. Beneath Mono lake are freshwater springs whose water is rich in calcium. When the spring water emerges through holes in the lake bed, it reacts chemically with the carbonates in the heavily alkaline lake water and forms calcium carbonate deposits around the mouth of the opening. As the water continues to flow from the spring, the deposits grow; the water pressure ensures that a channel will remain clear in the middle of the formation, like a pipe. Tufa can grow at a rate of up to 1 inch (2.5cm) per year, but because the chemical reaction depends on the lake water, tufa can only grow until it reaches the water surface.

Mono Lake is more than a million years old—one of the oldest lakes in North America. Over the millennia, its water level has shifted many times, mainly for natural reasons. Every drop in water level exposes some tufa, and there are some formations high above the current lake surface that are believed to be 13,000 years old. In 1941, Mono Lake was 35 feet (10.7mm) higher than it is today. But in that year, four of the five streams that feed Mono Lake were diverted to supply water to Los Angeles. Without that constant input, evaporation caused the water level to drop again, thus exposing huge numbers of tufa towers that had previously been submerged. The tufa towers near the new shore of Mono Lake are estimated to be a mere 300 to 900 years old.

The Tourist and the Tufa

It is these recently exposed tufa towers that draw most of the visitors to Mono Lake. The California Park Service has carefully constructed paths and boardwalks to protect the fragile environment along the lake shore, and charges admission to some of the more popular areas to defray the cost of maintenance. Signs and brochures warn tourists not to touch the tufa, which crumbles easily. The signs and boardwalks aren’t terribly effective, though; I’ve watched tourists climb on the formations and pick up pieces of tufa. Ironically, by doing so they’re helping to destroy the very thing that drew them there in the first place. I’ve never understood tourist logic.

The tufa towers made Mono Lake much more popular as a tourist destination, and the extra water certainly helped Los Angeles. But the change in water level was not healthy for the lake or for the tufa. As the lake began to shrink, the local ecosystem was thrown out of balance, and alkali deposits left on the shores were picked up by the wind, causing concerns about air quality in the area. After many years of citizen-led efforts, the California State Water Resources Control Board issued an order in 1994 to protect the lake and the streams that feed it. As a result, the average lake level has been rising gradually, although it’s still far short of its target height of about 16 feet (5m) above the 1994 level, even after more than 20 years.

That change in water level will submerge much of the tufa that now draws tourists to the lake—perpetuating yet another interesting cycle of logic. Had the water not been diverted in the first place and the water level not dropped, many of the tufa towers would not have been exposed, and therefore the lake would not have become the great tourist attraction it now is. Had it not become a tourist attraction, support probably could not have been generated to restore the lake; once that’s happened, the existing tufa may begin to grow again, but because most of them will be covered with water, there will be little to see, and tourism will likely decrease. Makes you think.

Although Mono Lake has some of the largest and most plentiful tufa towers in the world, similar formations exist in a variety of locations, especially in the western United States. But not all tufa is in the form of towers. Whenever the chemical conditions are right for calcium carbonate to form, tufa can grow. This includes lake bottoms and areas of the ocean floor, plus locations in caves, near streams, and around the mouths of hot and cold springs. As a result, not all tufa is considered rare or exotic; it’s commonly used, for instance, in gardening—certain alpine plants grow very well in or on tufa. But if you’re claustrophobic and want the experience of being in a cave without a ceiling, Mono Lake is definitely the place to go.

Note: This is an updated version of an article that originally appeared on Interesting Thing of the Day on July 24, 2003, and again in a slightly revised form on March 7, 2005.