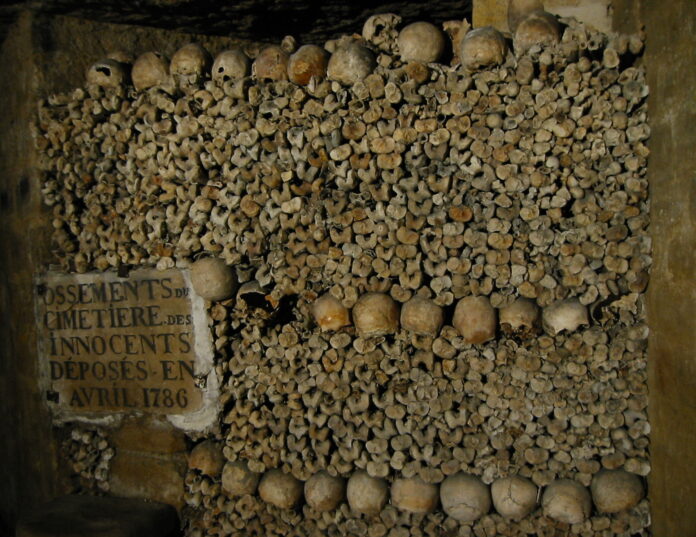 Paris is a shockingly large city. There are many fine vantage points from which to view the panorama, including the Montparnasse Tower, Sacré Coeur, the Eiffel Tower, or the bell towers of Notre Dame. I’m sure everyone who looks out over the vast expanse of Paris has a different impression; mine has been, overwhelmingly, “Gosh, that’s a lot of limestone.” With very few exceptions, the buildings of Paris are uniformly beige, limestone being the preferred building material—and not just for the buildings either, but for bridges, sidewalks, and monuments. As far as the eye can see in every direction, the earth is covered with stone. A splash of green, like a park, or gray, like the Seine, seems strangely out of place. All that stone had to come from somewhere, but it never occurs to most people to wonder where that might have been. Most of it was quarried locally, and what’s particularly interesting about this is that the empty spaces left when the limestone was removed—mind-bogglingly huge volumes of space—are largely still vacant, hidden beneath the city streets.

The Other French Empire

On visits to Paris and during the years I lived there, I spent a good bit of time underground. I took countless trips on the Paris Métro, of course, and I’ve spent several enjoyable afternoons exploring the public portion of the vast Paris sewer system, not to mention visiting the archeological crypts near Notre Dame. But these are merely the tip of the iceberg. Underneath Paris the real action—so to speak—is in the hundreds of kilometers of abandoned limestone quarries, part of which have been turned into a depository for the bones of millions of former citizens. As with all the underground attractions in Paris, only a portion of the catacombs is officially open to the public; this visitor-friendly section is known as the Denfert-Rochereau Ossuary, or simply the Catacombs.

Unlike the many lavish museums, cathedrals, and tombs in Paris, the entrance to the catacombs is a simple black door in a small building that you could easily miss if you blinked while walking by it. On our first visit, it took some time to find it because we were expecting something much more prominent. After we paid our entrance fee, we passed a sign reminding visitors that flash photography is strictly forbidden, then descended a long spiral staircase and entered a small gallery of photographs and drawings. Leaving the gallery, we began walking through long, dark, damp tunnels whose only significant features were signs at intervals stating when they had been built. Tourists zipped past us, talking loudly and snapping flash photos. I began to feel like the day would have been better spent sitting in a café drinking coffee and eating croissants. But then we passed through a larger chamber with a sign over the entrance to a dark hallway that said: “Arrête! C’est ici l’empire de la mort.” (“Stop! This is the empire of death.”).

Beyond that sign was another world—and one of the creepiest things I’ve ever seen. What at first appeared to be walls built of small stones were in fact huge, orderly piles of human bones. Tibias and femurs by the thousands were stacked neatly, interspersed with rows of skulls, which were sometimes arranged quite artistically in a cross or other pattern. There were no intact skeletons; the goal of the arrangement had clearly been maximum compactness. I could only assume that the ribs, spines, and other bones filled in the spaces behind the walls of large leg bones. Most of the stacks of bones rose to a height of about 5 ft. (1.5m), and while some were just a couple of yards deep, there was at least one area where the bones stretched back for a good 20 yards (18m), as you could see from the narrow gap left on top. The tunnels of bones stretched on and on; many side passages were blocked with locked gates, but even the path designated for tourists was about a mile (1.5km) long.

The bones began accumulating in the catacombs in 1786, just as momentum for the Revolution was building in Paris. Real estate was scarce while the cemeteries were becoming severely overcrowded. The government decided to reclaim the large swaths of land used for cemeteries by relocating the remains of the departed citizens to the empty limestone quarries, whose tunnels were at that time on the outskirts of town. The process of disinterring the bones from the cemeteries, moving them solemnly into the quarries, and arranging them there took several decades. No attempt was made to identify or separate individual bodies, but each set of bones was marked with a plaque signifying the cemetery they came from and the year in which they were moved. By the time the relocation was finished in 1860, an estimated five to six million skeletons had been moved to the catacombs.

The Outer Limits of the Twilight Zone

Even so, the bones filled only a tiny percentage of the empty quarries. As far as I know, none of the modern maps of the catacombs are exhaustive, but explorers have estimated that there are at least 185 miles (300km) of tunnels in the entire network of catacombs—that’s in addition to the 1,300 miles (2,100km) of sewer tunnels and 124 miles (199km) of subway tracks in the Métro system, though the three systems crisscross and interconnect at various points. Among a certain Paris subculture, exploring these forgotten tunnels is considered a sport. Despite the best efforts of maintenance workers to seal off illicit entrances and police patrols that slap heavy fines on trespassers, the maze of tunnels is so extensive that it is simply not possible to keep ahead of the so-called cataphiles.

The catacombs are eerie—quiet (except for the sounds of water dripping from the ceiling and tourists chatting), dark (except for the dim floodlights and camera flashes), and in many ways, downright depressing. It’s hard not to notice that the bones of these millions of people are all pretty much the same. The skull of a revolutionary may be resting on the leg of an aristocrat; noble and corrupt, young and old, wealthy and poor, all are indistinguishable now. It can give you an entirely new perspective on the concept of human equality. It also, needless to say, gives visitors a very keen sense of their own mortality. It made me wonder fleetingly whether, centuries from now, someone might walk by my bones among millions of others and think, “Gosh, that’s a lot of calcium.”

Note: This is an updated version of an article that originally appeared on Interesting Thing of the Day on June 11, 2003, and again in a slightly revised form on June 5, 2004.